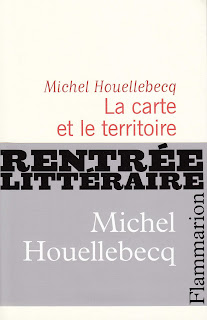 Any day now they will be announcing the results of the Prix Goncourt, whose recent prize winners, I have to say, have been more interesting to me than the Man Booker's in the UK.  One title being tipped is enfant [well he's actually 53] terrible Michel Houellebecq's new novel La carte et le territoire.  The low argument (and literary prizes of this kind are usually about low arguments) is that it will win because (a) it is long overdue (b) it's crazy that one of the most read French novelists worldwide hasn't won it and (c) under Buggins' turn it's Flammarion's turn, that being the way French literary prizes work, and MH is their big one this season.  The argument against is that (a) Houellebecq is far too politically incorrect (b) he has upset too many people and (c) the Ben Jelloun Question.  The last of these is the only one that matters.  In his regular column in an Italian newspaper, the French North African novelist Tahar Ben Jelloun (whom I admire far more than Houellebecq) laid into MH's latest novel saying he had wasted three days of his life reading it and that its trick of inserting real people into the narrative simply revealed a lack of inventive power.  Ben Jelloun matters because he is on the Goncourt jury.

So what about the novel itself?  I found it better written than his previous novels, both at the level of its prose, and in its tighter construction.  Some have found it less obviously provocative and, even more surprisingly, it is almost equable in parts.  There is also almost no sex in it which is a turn up for the books.  I think these critics who imply that the fire has gone out of him are wrong and that the old provocations are there even if they are a little less in-your-face.  The MH we love, mordant, savagely deadpan in his satirical swipes is very much in evidence and I found it very funny for that reason.  Yes, he inserts himself in the narrative but not in some sort of arch metafictional manner.  He does it to send himself up as a smelly, unwashed slob living in a hideous bungalow in Ireland feeding himself on cheap charcuterie, swilling cheap south American wine, and being generally surly and unattractive.  It's an old joke but it works.  The book sends up the contemporary art market through its central character Jed Martin, an artist with a touch of the master about him, and also aims at a range of Houellebecquian targets like assisted suicide, cremation, "inherently fascist" airlines etc etc.  It is also about ageing and death and his usual big subjects and it is about NOW.  He loves to describe, with toxic accuracy, the mediocrity of so much in the contemporary world.  Much of his "provocation" resides in his inability to praise what we know shouldn't be praised but regularly is.  Unfortunately I can't tell you what happens in the final third section of the novel because it will spoil your enjoyment but it is brilliantly done and funny.  It also made me think that he could have a future as the author of romans policiers.  But it probably won't win the Prix Goncourt.
Posted by Nicholas Murray at 20:54 2 comments:

Twenty Thousand Stars In the Sky

About eighteen months ago I installed a stat counter on this blog and I see that I have at last exceeded 20,000 hits since then.  Thank you to everyone who has thought it worthwhile to pay a visit and just imagine if each of those constituted a book sale....
Posted by Nicholas Murray at 08:47 No comments:

What is a Best Selling Author?

Later this month a book, Writers in Black and White, is published which includes interviews with a range of contemporary British authors, described as "best-selling", in which they talk about their writing lives.  It is a beautifully produced book with stunning black and white photographs and I am very honoured to be one of the subjects.  But a "best-selling author"?  I think there's a mistake but I am happy to go along with it.  I really feel, as Matthew Arnold once put it, that: "I am the most unpopular of authors."  Bruce Chatwin, when his Songlines became an authentic best-seller, asked himself: "Have I joined the trash artists?"  Typically, he wanted his cake and eat it.  Every writer wants his or her book to sell, not out of vanity, but because books need the co-operation of readers to come alive.  An unread book is simply a heap of paper and glue until another's imagination comes along to breathe life into it.  No doubt there are some authors who like the idea of not being appreciated by the vulgar, of being a rarified taste, but I think they are very few.  So I am going to enjoy my slightly fraudulent status as a "best-seller" for at least as long as it takes for anyone to look up my sales figures.  Oh, and do go out and buy this lovely book.
Posted by Nicholas Murray at 12:15 1 comment:

Kadare and Kafka: an Update 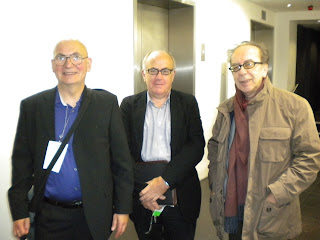 The Albanian novelist Ismail Kadare [seen here on the right, with his fine translator, John Hodgson, on the left of the picture and me in the middle] has been in London this week at a number of events to promote his gripping new novel, The Accident (Canongate).  He was in conversation on Tuesday with Julian Evans at the Free Word Centre (and at the Cheltenham Festival today).  Yesterday I interviewed him on behalf of English P.E.N. as part of the 'Bloomberg Bites' lunchtime series of talks at the finance house Bloomberg in the City.  Kadare, whose relationship with the Stalinist regime of Enver Hoxha has always been controversial, came over as a very charming personality and he was in reflective mood, offering us some very interesting 'bites'.  One of these came when I asked him how much he felt he had been influenced by Kafka, a name that is invariably mentioned in interviews with Kadare, often by the author himself.  He revealed that he had not read the banned Kafka until the early 1980s, or rather that he had read very limited extracts as a student where Kafka was presented in order to be repudiated as an example of capitalist decadence.  Which of course simply made young people all the more anxious to read him.  Not very bright these dictators.

Bloomberg's HQ in Finsbury Square is a marvel.  Through its stage-lit spaces, where copious security people stand every few yards like flunkeys at a Versailles court ball, and where in the refreshment area everything is free, including great domed piles of bananas, cookies, apples and cherry tomatoes, and large screens everywhere broadcast the latest share prices and financial news (and the breaking news that Mario Vargas Llosa had just been awarded the Nobel Prize for Literature) the bemused Kadare, his interpreter and his interviewer moved as if through the film set for a remake of Brave New World.   But Bloomberg are generous hosts and it was good to learn that The Accident is being discussed at their next in-house book group.
Posted by Nicholas Murray at 09:31 1 comment: 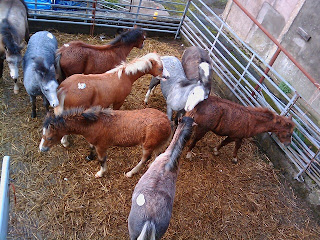 Each year around the May bank holiday the literary world descends on the Welsh market town of Hay-on-Wye for the annual literary festival and the town assumes a different character.  But yesterday, as the rains came sheeting down and the river Wye looked very turbulent and brown and dangerously high, the twice yearly Hay Horse Fair took place and I wandered into the auction arena where dozens of these tiny Welsh mountain ponies (left) were being sold.  They are beautiful creatures, full of excited nervous energy and, as the auctioneer put it at one point, "straight off the hill".  The going rate for a small chestnut pony was only £10 but one or two were clearly marked much higher by the cognoscenti and attracted five times that price.  One lot was a mare in foal accompanied by one of her earlier offspring.  "Three for the price of one," declared the auctioneer who had clearly been determined to outdo the marketing tactics of the British book trade which manages only three for two.  His auctioneer's gavel was a marvel.  I couldn't get near enough to see exactly what it was made of but it looked like, if not the jawbone of an ass, then a bone of some kind.  It added to the slightly wild, primitive flavour of the event.  As I cast my eye around the ring there was little sign of the literati and it was definitely an outing for the folks.
As Hay and its puffed-up booksellers (whose absurdly climbing prices are presumably a desperate attempt to stem the tide of loss from rival internet book-dealing) continue on their journey upmarket it was nice to be rubbing shoulders with down to earth people with a practical job in hand who remind you that Hay was a Welsh market town long before it became a synonym for bookishness.

Posted by Nicholas Murray at 15:17 No comments: