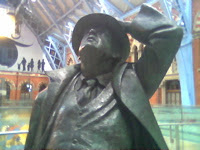 There he is: the ruin-bibber himself, gazing up into the magnificently restored ironwork of the roof of St Pancras International. Betjeman's statue is done in a reassuringly modest scale unlike the grotesque and vulgar giant bronze of two lovers meeting on the platform that stands some distance away. I have yet to take the train from the new station but the flashing boards: "PARIS NORD" had me twitching a bit. Not normally a fan of retro stuff, I think they have done a brilliant job. But it is still the shapely grandeur of the Swiss Re ("the gherkin") towering over the City that really excites me. There's room for both I say, in pre-Yuletide affability. Have a nice Christmas and New Year everyone, I shall be shutting down shortly.
Posted by Nicholas Murray at 08:47 6 comments:

Rilke and The Limits of Criticism 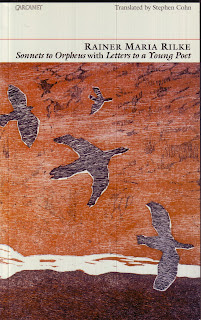 Is there any serious reader who hasn't, at some time, grown exasperated or simply jaded at the unstoppable tsunami of literary criticism, even if we know how vital it is to have it, like a visit to the dentist? Re-reading Rilke's Letters to a Young Poet in Stephen Cohn's translation for Carcanet (2000) I came across these scraps of wisdom: "...there is nothing which touches works of art so little as does the language of criticism; nothing ever comes of that but more or less felicitous misunderstandings. Few things are in fact as accessible to reason or to language as people will generally try to make us believe. Most phenomena are unsayable, and have their being in a dimension which no word has ever entered; and works of art are the most unsayable of all - they are mysterious presences whose lives endure alongside our own perishable lives." In a later letter to the young poet he writes: "Works of art are infinitely solitary, and nothing comes so little near them as does criticism. It is love alone that can grasp them and do them justice. You should always trust yourself and your intuitions against that kind of analysis or argument or presentation...To allow each thing its own evolution, each impression and each grain of feeling buried in the self, in the darkness, unsayable, unknowable, and with infinite humility and patience await the birth of a new illumination: this alone is what it means to live the life of an artist - in understanding as much as in creating...patience is everything."

Love, patience, understanding, humility in the face of the text. One day, perhaps.
Posted by Nicholas Murray at 13:46 9 comments: 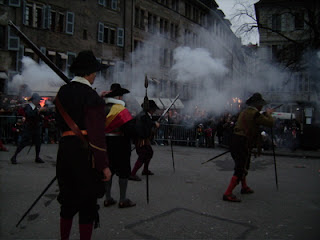 What was I saying about city patriotism? In Geneva at the weekend (don't mention the words "carbon" and "footprint" to me as 2007 draws to a close, and I haven't finished yet) to co-incide with the annual l'Escalade or Ladder festival. I had no idea this would be on but the streets were full of men in 16th century garb, mostly military, and there was shooting in the streets (see right) from ancient muskets, or possibly the long pointy thing that went "Pop!" was an arquebus. On the night of 11/12 December 1602 the dastardly forces of the Dukes of Savoy tried to storm the city by climbing up the ramparts at night using the fiendish ploy of, er, ladders. The heroic citizens of Geneva courageously repulsed them, hanged various prisoners and spitted the Savoyard heads on spikes etc etc. Each year a great historical pageant takes place with everyone in historical costume (mostly blokes for it's a bit macho) and horses and carts, a hangman or two, happy peasants, ladies in cloaks and white linen bonnets, lots of drums and pipes, and, my favourite, lashings of vin chaud. Whether any of this has to do with the recent controversies over racist political campaigning in Switzerland, including adverts showing black sheep being repelled at the border by white sheep, I pass over in silence. But I always wonder how much this historical mummery reflects the actual nuances of what happened and again I wonder what function it is performing in the present. The world of high tech and "private banking" in modern day Geneva seems a long way from all this Reformation ruff and pikestaff business.
Posted by Nicholas Murray at 17:29 No comments:

The Last Refuge of the Scoundrel

Dr Johnson's famous dismissal of patriotism as "the last refuge of the scoundrel" was probably meant to refer to the nation state but there are smaller kinds of patriotism too and one of these is at the level of the city. In spite of having published a book this week about my native city, Liverpool (see the details to the left of this column) which is in part a piece of city-patriotism, I still wonder about the attachment to place and how easily it can slide dangerously into a rejection of the people who don't come from that place - which presumably was what Dr J was on about.

In 1934 the great Austrian writer Joseph Roth, in The White Cities wrote a remarkable passage about this subject:

"One might say: patriotism has killed Europe...European culture is much older than the European nation-states. Greece, Rome, Israel, Christendom and Renaissance, the French Revolution and Germany's eighteenth century, the polyglot music of Austria and the poetry of the the Slavs: these are the forces that have formed Europe...All are naturally opposed to the barbarity of so-called national pride. The imbecile love of the 'soil' kills the love of the earth. The pride of being born in a particular country, within a particular nation, wrecks the feeling of European universality."

From The White Cities: reports from France 1925-39 translated 2004 by Michael Hofmann, Granta Books.
Posted by Nicholas Murray at 08:31 No comments: