Are Computers Bad for You?

Having just experienced an enforced 10-day separation from my computer during which I discovered the pleasures of the internet café and silence I have to say I am delighted to be re-united with my trusty 12-inch Apple iBook. This is not because I am a compulsive geek but because that is where all my stuff appears to be these days and being shut out of it was very frustrating. So thank you Micromend of Tottenham Street, W1 for finally putting me out of my misery late yesterday afternoon.

Like most literary folk I have always had some worries about the computer - not the fogeyish ones about the superiority of the fountain-pen but more seriously about what they are doing to the nature of our minds. I mean that the constant state of alert that permanent broadband connections now put us in, with a PING! every so often as a new email arrives, is at war with the more sustained kinds of concentration and long-haul mental engagement that serious reading demands. The screen is always there and the web's culture of links which makes intellectual grasshoppers of us all is an added threat to the long, slow silences which reading needs. What am I saying? Junk all computers? Of course not. They are useful and we can't do without them but I think we need to devise some strategies for keeping them at bay. Like switching them off (or not switching them on) more often and for longer periods. I know that people who study the brain are examining the issue of how our whole mode of thinking may be undergoing a transformation as a result of the formation of young minds especially by the net and it's a very important issue that could determine the whole future of literacy and intellectual culture. Meanwhile, here's an interesting discussion of the issue if you didn't see it.

Me, I'm off to Marrakesh for a week where I don't expect to take my laptop with me nor cross the threshold of an internet hubble-bubble café.
Posted by Nicholas Murray at 07:30 2 comments:

Of Trains and Alice and the Travelling Zoo 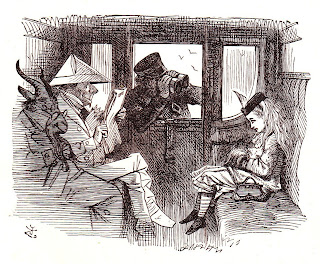 Having just returned from Liverpool on a nightmarish journey on Sunday night of well over six hours as a result of engineering works and a deceased train on the line ahead, my dyspeptic-traveller's reflexes are buzzing. We were diverted to Manchester to board a Virgin train for Euston where the barrier ticket collectors were backed up, menacingly, by a platoon of police in high-viz jackets (and bullet-proof vests?). Once on board, the overcrowding was horrible on these newish but cramped and overloaded trains. How nice therefore to open up Through the Looking Glass and catch this picture by Tenniel of a lost world of rail travel when compartments were spacious and comfortable and civilised. It's true that the Guard who was pursuing Alice for her ticket was deploying means of surveillance which we would judge "inappropriate" today in relation to a female passenger, but the goat and insect add a realistic touch - often these days one feels that railway compartments resemble a zoo. My theory of Technological Regress - that while some things like mobile phone or computer innovation go forward, other things are hurtling backwards - is brought out by contemporary rail travel. Only on those slow trains that glide around the Riviera does one see any more these spacious, comfortable compartments in place of tightly-squeezed seats aiming to make trains as uncomfortable as planes.

That small but perfectly formed readership which subscribes to the Rail for Hereford Bulletin will shortly be able to enjoy/suffer my diatribe against First Great Western in a piece called "Mr Grumpy Goes to Paddington". How could we get through life if there were nothing to moan about?
Posted by Nicholas Murray at 10:03 1 comment: 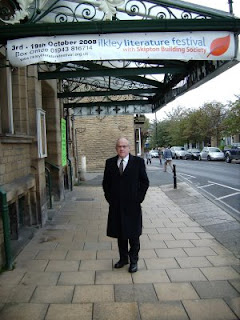 One of the consequences of being "an author" is that you get invited to appear at literary festivals to talk about your latest book. I seem to have done a lot of these over the summer and the last one is on Saturday and Sunday at Liverpool, the inaugural Shipping Lines festival. It's a surprise that this is the first in the city but it's nice to end the year's run of (gigs?) in one's home town where I'll be talking about my recent book on Liverpool as part of a panel that will be attempting to see if there is a distinct 'Liverpool voice'. I think the answer is yes but we'll see. That's on Sunday. On Saturday I am on another panel looking at "the books that built me" where we will be talking about the influential books in our lives. Get along there, er, wack.
Posted by Nicholas Murray at 15:21 No comments: