Roy Jenkins and I 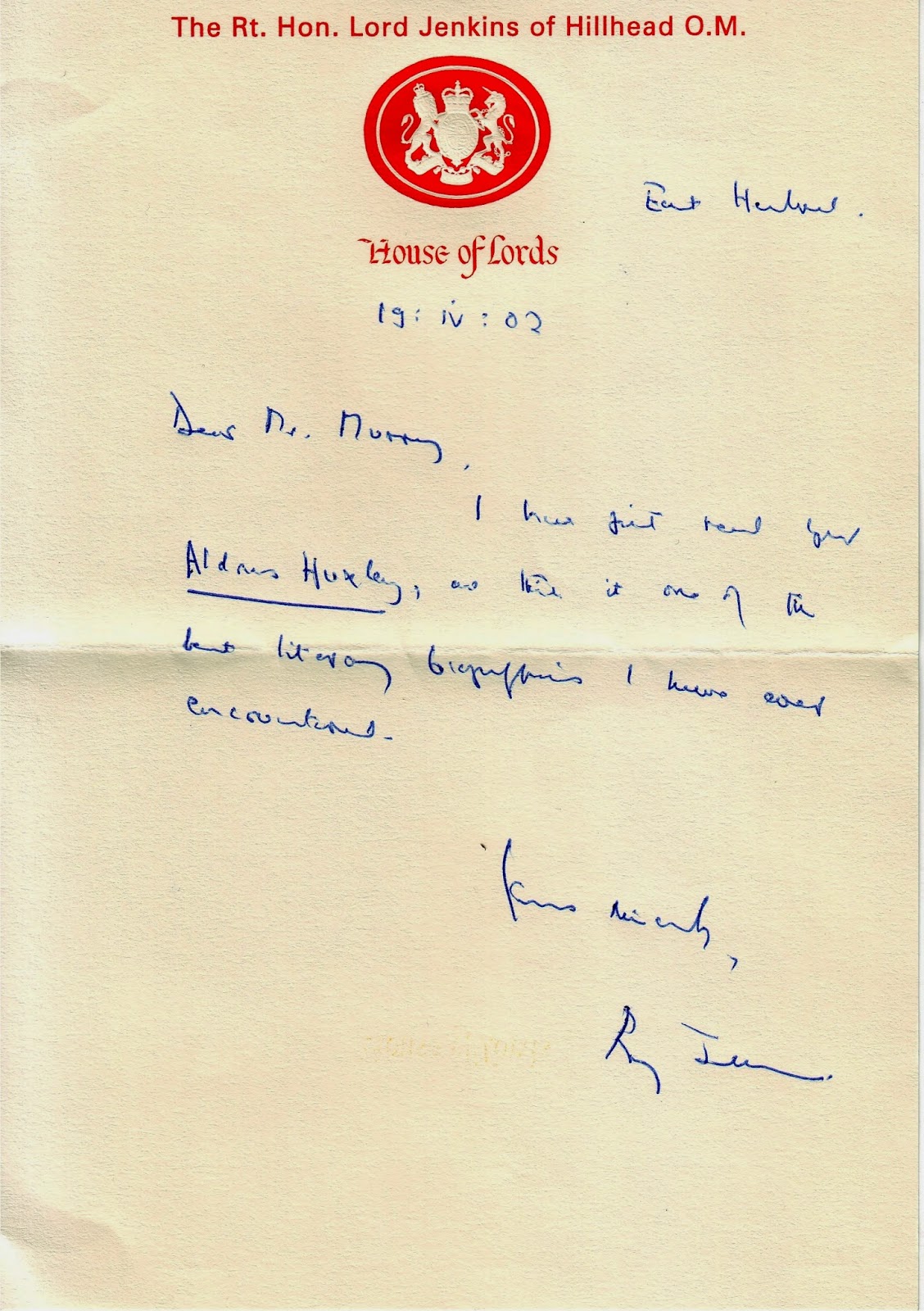 It is more than 12 years since I received this letter out of the blue from Roy Jenkins who is now being much talked of as a result of a new biography by John Campbell.  I am still slightly amazed.
Posted by Nicholas Murray at 21:36 No comments:

Writing About the Great War

Three months into the centenary year of the outbreak of the First World War is there any kind of consensus about how this event should be marked or, "celebrated" as some have expressed it (rather unfortunately in my view)?  The word "commemorate" is surely more appropriate.

Next month my satirical poem, Trench Feet (Rack Press) about an ambitious TV academic who sees the centenary as an opportunity to make a name for himself by reshuffling the standard clichés about the War (and who comes badly unstuck) will be published and naturally I have been thinking about how we should represent this event.  Having been commissioned, as the author of a book about the war poets, The Red Sweet Wine of Youth: British Poets of the First World War (Abacus), to give several talks during the year, I have been reflecting on two issues: how the participant writers represented the conflict and how (largely as a result of those representations) it is seen today. The second of these is for another day but as Tim Kendall in his excellent new anthology of the poets puts it, the poets "have determined the ways in which the War has been remembered and mythologized. Not since the the Siege of Troy has a conflict been so closely defined by the poetry that it inspired."

Not just the poets.  I am currently reading with great interest a collection of writings about the War by Ford Madox Ford, whose Parade's End tetralogy is one of the major fictional attempts to reflect the War in all its complexity.  The collection, War Prose, edited by Ford scholar Max Saunders, brings together a lot of miscellaneous pieces by Ford and I strongly recommend it as a prophylactic against the routine clichés.

It is fascinating to witness Ford struggling to articulate his feelings about his experience and about the problem of rendering those feelings, and the conflict itself, with any semblance of accuracy.  His 1916 essay "A Day of Battle" begins: "I have asked myself continuously why I can write nothing – why I cannot even think of anything that to myself seems worth thinking! – about the psychology of that Active Service of which I have seen my share.  And why cannot I even evoke pictures of the Somme or the flat lands round Ploegsteert?"  He considers his writerly powers of visualisation that have been praised by others yet which in this instance desert him.  He finds "the mind stops dead, and something in the brain stops and shuts down".  The experience was so extraordinary that it defeated him: "As far as I am concerned an invisible barrier in my brain seems to lie between the profession of Arms and the mind that puts things into words.  And I ask myself: why?"

Perhaps this is why so many of the classic accounts of the Great War were written some years after the Armistice. Time was needed to sift the memories and determine what the participants actually thought about what they had been through.  I remember, when writing my book, sifting through the pencilled notebooks of Siegfried Sassoon in the library of the Imperial War Museum (formerly the institution known as Bedlam!) and following the twists and turns of his scribbled attempts to start the story which became the classic Memories of an Infantry Officer which did not appear until 1930. Others managed to gather their thoughts more quickly.  A.P. Herbert's The Secret Battle (1919) is one of the often overlooked fictional accounts that appeared very soon after the end of the War.  I strongly recommend it.

Ford considered that the practical preoccupations of being a soldier "absolutely numbed my powers of observation"but his account of the psychology of someone trying to make sense of the war is fascinating.  A good starting point for thinking more seriously about the Centenary.
Posted by Nicholas Murray at 09:12 No comments:

Talking about the Poetry Pamphlet

Thank you to Planet magazine for interviewing me for a podcast on the subject of poetry pamphlets in general and my Rack Press in particular.  Great to have been in Aberystwyth the other week talking to such thoughtful hosts.
Posted by Nicholas Murray at 18:34 No comments:

I last saw Tony Benn at a demonstration outside the Greek Embassy in January last year where he made a characteristically short, spontaneous and wise speech about the rise of the nasty far Right in Europe.  He had wrapped up well as you see and brought a folding camp stool to sit on.  When we chatted with him his dry sense of humour was once again in evidence.  A great democratic socialist who showed that label was no oxymoron.
Posted by Nicholas Murray at 09:33 No comments:

I see that Hanif Kureishi has been at it again this time rubbishing creative writing courses and giving the media the pleasure of pointing out that he is a Professor of Creative Writing himself.  As if he cared.

The old Latin tag poeta nascitur non fit [the poet is born not made] which seems to say that writing cannot be taught, makes its appearance regularly, but the debate never seems to get further than the rehearsal of what was said last time so here are Ten Things You Won't Always Hear About Creative Writing Courses [from someone who teaches non-fiction creative writing].

PS No mention above of the actual students on such courses, working with whom, for those of us who teach them, is what makes the whole show worthwhile.
Posted by Nicholas Murray at 08:12 No comments: