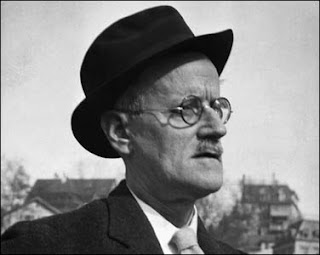 I've just been thinking about James Joyce's notion of the "epiphany", that moment of illumination that every artist spends his or her time hoping for. In Stephen Hero Joyce writes: "By an epiphany he [Stephen] meant a sudden spiritual manifestation, whether in the vulgarity of speech or of gesture or in a memorable phase of the mind itself. He believed that it was for the man of letters to record these epiphanies with extreme care, seeing that they themselves are the most delicate and evanescent of moments." Photographers too have this hunger to seize what Cartier Bresson called "le moment décisif". Willy Ronis the photographer called his trade a "chasse aux images", during which it wouldn't surprise me if a lot of wily game got away from the huntsman. But I wonder how conscious all this is? Like happiness which can never be sought but which visits us as a gratuitous by-product of whatever thing it is we were doing, the artist's shaft of light just suddenly shines out at precisely the moment when it wants to. The trick of course is to be trained, poised, limber, for the moment when the heavens open. That is what differentiates an artist like Joyce from the rest of us, I suppose.
Posted by Nicholas Murray at 09:09 2 comments: 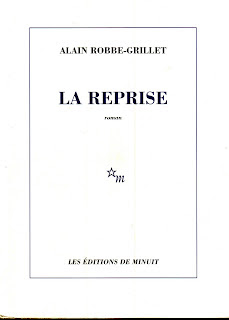 The death this week of the French writer Alain Robbe-Grillet, credited with inventing the nouveau roman or 'new novel' in the 1950s, has once again highlighted the supposed differences between the 'traditional' and 'avant garde' novel. John Sturrock, that excellent interpreter of French culture to the reluctant British, wrote in his Independent obituary: "He had come to literature, unusually, from mathematics and the hard sciences; and rather than perpetuate it, his declared intention was at long last to bury it." As Sturrock goes on to show R-G softened over the years and it was a late novel, La reprise (2001) that I last read and found it actually richly imaginative, mysterious and atmospheric in its immediately post-war setting, and the plot (the bit that is always the bone of contention between the Anglo-Saxon realists and those pesky continental 'experimentalists') was intriguing - though don't, please, ask me to summarise or explain it! I wonder if some of this is just a storm in a teacup, especially when many of the 'avant garde' techniques have been quietly appropriated by the 'mainstream' novelists. I am currently re-reading, and finding myself lost in admiration for, E.M. Forster's Howards End. Written in 1910 before the nouveau roman circus arrived in town it gives me as much pleasure as La reprise. As with those people who hate contemporary classical music because it doesn't sound like Mozart I feel that you don't need to choose. You can have both. You can double your pleasure. As a professional hedonist I wouldn't want it any other way.
Posted by Nicholas Murray at 08:05 No comments:

News reaches me of a very promising looking day conference in Oxford - free and open to all - on Friday 22 February at the Maison Française d'Oxford starting at 9.30 and chaired by Patrick McGuiness of St Anne's. The night before, one of the participants, Stephen Romer, will be launching his new collection Yellow Studio. If you want to know more contact Patrick at patrick.mcguinness@st-annes.ox.ac.uk. The Conference is titled: "Poetries in Dialogue: relations between French and British and Irish Poetries."

Here is an extract from the conference prospectus: "The history of poetic relations between the French and British and Irish traditions has been intense, confrontational but ultimately creative. From Mallarmé’s Poe to Pound’s Laforgue, from Bonnefoy’s Yeats and Mahon’s Jaccottet to Barry MacSweeney’s Apollinaire and Guy Goffette’s Auden, the two poetic traditions have interpenetrated and enriched each other.

For all this, there are times in which the two have barely been on speaking terms: for the French, British poetry has been stuck in a pre-modernist rut whose only creative injections have come from the US or Ireland; for the British mainstream, French poetry has supped too freely from the poststructuralist table. Matters are not helped by poetry’s marginal status in the economics of publishing, and Britain’s derisory translation culture. "
Posted by Nicholas Murray at 10:57 No comments:

Nietzsche and Mallarmé: a quiz

Apologies for the dearth of posts recently but Life (and, I am afraid its opposite: family bereavement) has intervened but I came across the following from Nietzsche's The Birth of Tragedy while ambling through my personal commonplace book: "For the true poet the metaphor is not a rhetorical figure but a representative image that really hovers before him in place of a concept." I like this idea of the corporeality of poetic imagery in a world where we all live so much inside our heads and virtual universes but immediately below I see I have scribbled something from Mallarmé: "tout, au monde, existe pour aboutir à un livre". Question: do these support each other? Is writing a response to the world or is writing itself the world? Is a book more than a book? An independent entity that floats free of the empirical world? Or a report on experience? Mmmm, it must be a Wednesday lunchtime in the depths of winter.
Posted by Nicholas Murray at 13:37 2 comments:

Navel-Gazing: More Thoughts on the Blogosphere

The current issue of the indispensable New York Review of Books has a review-article by Sarah Boxer who compiled Ultimate Blogs: Masterworks from the Wild Web (a sort of anthology of blogs which she admits looks at first blush like a self-defeating project: the improvised, instant, anarchic, for-the-moment nature of blogging seeming unsuited to the scholarly solemnity of an anthology). But her article is interesting to those of us "Brit Lit Bloggers" who are really more "Lit" than "Blog" in our souls. I learned some new words like "link whore" which describes those people desperate to get themselves mentioned in other people's blogs. But she concludes: "Blog writing is id writing - grandiose, dreamy, private, free-associative, infantile, sexy, petty, dirty." To which I would add, from my experience of literary blogs: "Often over-solemn and self-righteous." I wish there were a bit more humour and self-mockery and lightness of touch in some of the litblogs I see - but then here am I being rather solemn about it so WTF.
Posted by Nicholas Murray at 12:53 2 comments: