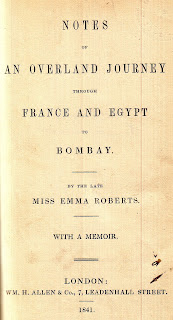 I shall be in Oxford at 2.30 on Tuesday 1st April to talk about my new book on the Victorian travellers, A Corkscrew is Most Useful: The Travellers of Empire which is published on that day. The event is part of the Oxford Literary Festival and I will be talking, taking questions, and signing books. I also intend to report here tomorrow on this April Fool's Day experience so watch this space!

The illustration here is of the frontispiece of a book of travels in India by Emma Roberts, one of many enterprising and insightful Victorian women travellers covered in my book.
Posted by Nicholas Murray at 15:18 No comments: 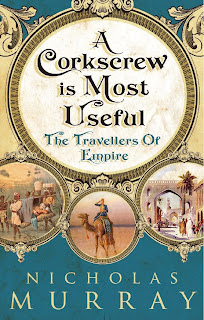 Apologies for the low profile recently. Easter and overwork are the culprits but now there is to be a burst of activity according to a schedule that has arrived today from my publishers. This will enable me to do a bit more orthodox blogging as I set off promoting my new book, A Corkscrew is Most Useful: The Travellers of Empire about the Victorian travellers and explorers. Next Tuesday, 1st April, is publication day and I shall be launching the book with a talk at the Oxford Literary Festival. The next day, just to complicate matters, I am in Liverpool to celebrate the recent publication of my other new book about Liverpool (see details to the left here) at a reception at the Everyman Theatre at 5.30. Do come along if you are in the city on Wednesday. Production delays have caused this rare co-incidence. On Friday I shall be closeted at the BBC doing radio interviews. You lucky folk in BBCs Cambridgeshire, Cumbria, and Hereford and Worcester (so far) will be able to hear the interviews. Later in the year I will be at other festivals, including the Edinburgh International Book Festival in August and I will be sending dispatches from those fronts.

Yesterday I was at Queen Mary College University of London in Mile End being grilled by some very clever students about my Liverpool book as part of their course on Contemporary Writing. As well as studying contemporary writing the students have some visits from the live animal and I thoroughly enjoyed an interesting and lively discussion.
Posted by Nicholas Murray at 08:54 No comments: 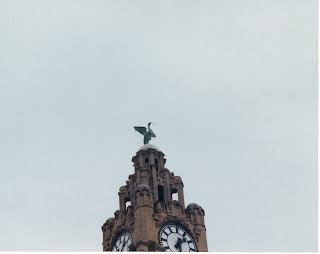 My new book from Liverpool University Press, So Spirited a Town: Visions and Versions of Liverpool is the occasion of an interview with Mark Thwaite at the Book Depository. It will be launched in Liverpool on 2 April at 5pm at the Everyman Theatre (where Peter Postlethwaite is due later in the year to wow the European Capital of Culture with his King Lear).

As Mark quite rightly points out below, he is another fine citizen of that great city, as well as a superlative bookman.

The picture, by the way, is of Liverpool's Liver Buildings topped by one of the famous Liver Birds.
Posted by Nicholas Murray at 11:13 2 comments: 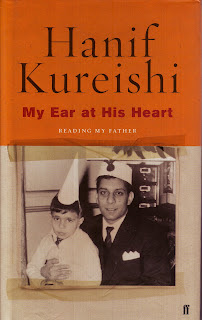 I think it was Hazlitt who said that whenever he heard about a new book he went and read an old one. Not exactly in that spirit perhaps but noticing that Hanif Kureishi had a new book out I realised I hadn't read the last one that was sitting on my shelf gathering dust. His memoir of his father, My Ear at His Heart: Reading my Father (2004) is one I should have read, having made a couple of attempts to write a little about my own father in two books, A Short Book About Love (2001) and my latest, So Spirited a Town: Visions and Versions of Liverpool as well as in a couple of published poems. Where I made some fleeting references (in the future I will be doing this at greater length) Kureishi devotes a whole book to his father who worked at the Pakistan Embassy in London as a minor functionary but who harboured a life long desire to be a writer. His son discovers an unpublished manuscript by his father and it sparks a book-length interrogation supplemented by much autobiographical material. It's a fascinating book in many ways though Hanif K will strike some as not an easy person to love. There's a narcissistic streak as when he writes coolly: "I liked women, their bodies and their concern for me. Sometimes they liked me." Elsewhere he points out that working as an usher at the Royal Court Theatre was good for picking up girls and having sex with them in the toilets after the house lights went down. Kureishi has no problem about such revelations and it's not so much his rather glum accounts of sex and drug-taking in the suburbs but the strange absence of women in his description of his family life that is puzzling. His mother, for example, who was a painter and who took him every day to the library he says (a feat that surely merits a mention alongside his father's literary enocuragement) is virtually invisible and his only sister, Yasmin completely out of the narrative. An article in last week's Independent by her suggests that sibling rivalry is a big issue with the Kureishis and, if Yasmin's charges are true, he has misrepresented both his family and her as well as being cruelly nasty about her own writing career. Family feuds are best kept out of and the truth is always hard to establish but it's odd that someone so right-on as Kureishi is, without being actively sexist, so uninterested in the lives of women, particularly, it seems, those (including former partners) who have found themselves in his books. It's an old issue (he himself mentions Philip Roth's experience of being reviled by his extended family for the way in which he portrayed his community) and one that probably won't be going away.
Posted by Nicholas Murray at 17:54 No comments: 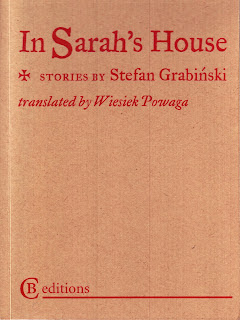 Discovering a new writer is always a thrill: you are suddenly acquainted with someone you didn't realise you had wanted to know. CB Editions have just issued a selection of the strange supernatural stories of the Polish writer Stefan Grabinski (1887-1936) translated by Wiesiek Powaga. Critics have labelled him "the Polish Poe" for obvious reasons but, hard as it is to judge the quality of prose translated from another language, I wonder if there isn't a touch of Oscar Wilde in his sensual language. These stories, all with a bizarre twist, are beautifully realised and attentive to detail and I couldn't recommend them highly enough. Grabinski (sorry I can't do the accent on the 'n' here) was born in the eastern provinces of Poland which are now the Ukraine and moved to Lvov where he became a teacher and seems to have spent a lot of his life in relative obscurity. Other works have been translated and there's a website dedicated to him.
Posted by Nicholas Murray at 08:10 9 comments: