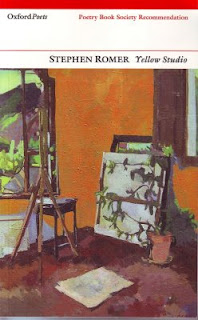 I've said here before how puzzled I am that most literary bloggers seem to run a mile from contemporary poetry. Stephen Romer's Yellow Studio might be worth trying if you are suffering from this particular phobia. It's one of the best collections of 2008 and a substantial volume where all his skills of tender eroticism and lovely fluency of line are on display. The final section of the book, which contains a series of poems written after the death of his father, is particularly striking. Published by Carcanet under its "Oxford Poets" rubric (an obscurity explained by the fact that they bought up Oxford University Press's outstanding poetry list a few years ago when the venerable OUP's marketing people told them to junk their poetry) this volume was even reviewed in The Observer when it came out, a treatment normally reserved for the poetry celebs. Go on, try it.
Posted by Nicholas Murray at 14:27 3 comments:

The Country and The City: Liverpool in the Welsh Marches 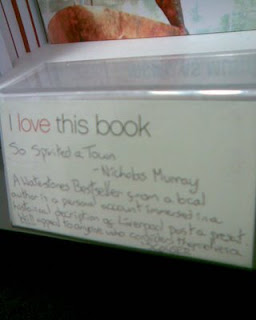 If you are contemplating a wet Bank Holiday weekend in Wales then you might like to consider at least one event that is under cover. I shall be talking at the Presteigne Festival of Music and the Arts on Friday 22 August at 4pm about my book on Liverpool, So Spirited a Town: Visions and Versions of Liverpool. The photograph here shows a display in Waterstone's main shop in Liverpool where it has been designated "A Waterstone's Best-Seller" in the local books section as you enter the shop. The Festival is set in the beautiful countryside of the Welsh Marches and, being on the borders, some events are in venues in England and some in Wales. I think this one will be in England. You will be welcome.
Posted by Nicholas Murray at 09:47 1 comment: 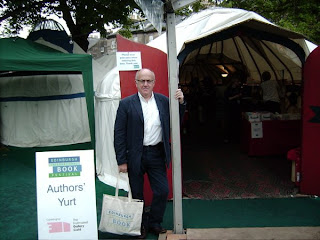 I wished I could have spent longer at the Edinburgh Festival yesterday where I took part in two events: one about travel writing (see previous post) and the other an Amnesty event of readings from imprisoned writers. The hospitality was excellent and here I am outside the "Authors' Yurt", a splendid concept, where authors go to be briefed about their events, meet each other, and, after the event, to consume a noggin or two of the sponsor's whisky. The word 'civilised' springs to mind.

Out in the Edinburgh streets one is accosted by performers handing out flyers for their shows and one man (whom I suspected of being a religious zealot rather than a mime artist) stopped me and said: "Are you interested in the Truth?". Entering into the ludic spirit of things I replied: "No, I prefer Lies." What larks.
Posted by Nicholas Murray at 11:03 No comments: 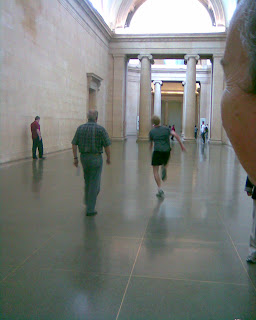 I am dashing (here is one of the live sprinters in Martin Creed's installation at Tate Britain today doing what we'd all like to do, sprint down the main hall at the Tate) off tomorrow (Monday 11 August, 8pm) to the Edinburgh International Book Festival to discuss my book A Corkscrew is Most Useful: The Travellers of Empire. Agnostic about the usefulness of book festivals I am nonetheless looking forward to this event which I am sharing with Ted Jones, author of The French Riviera a literary guide to that very literate part of the globe.

Get your running shoes on and get down there!
Posted by Nicholas Murray at 16:33 No comments: 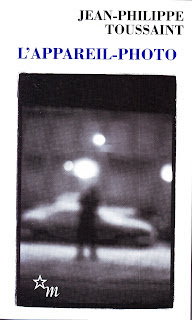 It is that season of the year when the Man Booker Prize longlist is released and this time I find it hard even to stifle a yawn. In the search for some interesting contemporary fiction away from those dismal 3 for 2 window displays in Waterstone's, it is sometimes helpful to compare what is happening elsewhere. I have just read Jean-Philippe Toussaint's wonderfully original novel L'Appareil-Photo which is to be published in November by the estimable Dalkey Archive, translated by Matthew B Smith as Camera. This short novel was first published in 1989 and it is an exquisitely funny book that is at once about everything and nothing. Its immaculate descriptions of the banality of the quotidian are, I feel, a kind of subversive attack on realism and it is just the sort of perfectly written, original, intellectually stimulating fiction that one would love British publishers to let us read.

The current éditions de Minuit paperback comes with a fascinating interview with Toussaint by Laurent Demoulin in which the author talks about his approach to fiction. They discuss how this kind of writing can best be labelled. One possibility is to call it, as some French critics have done: "Le nouveau 'nouveau roman'" or even "école de Minuit" after the publisher who has promoted it. British critics would probably plump for "minimalist" but Toussaint himself has proposed "roman infinitésimaliste" which I don't think needs translating. As he puts it in the interview [my translation]: "The term 'minimalist' merely suggests the infinitely small, whereas 'infinitesimalist' refers as much to the idea of the infinitely large as the infinitely small: it contains the two kinds of infinity that one should always encounter in a book." His art of maximal suggestion through minimal means works for this reader.
Posted by Nicholas Murray at 10:31 No comments: