I have already written about the Malcolm Lowry Centenary Exhibition at Liverpool's Bluecoat Arts Centre but forgot to mention that there is a special ale (appropriate given Lowry's favourite leisure activity) brewed by the local Wapping microbrewery available in the Bluecoat bar . A crowded schedule prevented me from imbibing any of this ale at the opening night but I managed to snaffle an empty bottle whose contents had just been poured into the glass of the Bluecoat Director, Bryan Biggs (who drew the label) and here it is.
Posted by Nicholas Murray at 17:31 No comments: 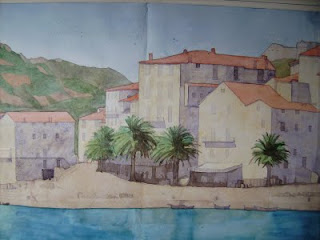 A free copy of Louis de Bernière's new collection of stories, Notwithstanding will be sent to the first person who identifies the location of this watercolour by Herbert Davis Richter R.I. (1874-1955) which my wife and I recently acquired. The painting is untitled and my guess is somewhere in Corsica but I could be wrong. It's a lovely picture and I'd like to know which waterside spot it represents. Thanks to Random House for the copy of the book.
Posted by Nicholas Murray at 07:49 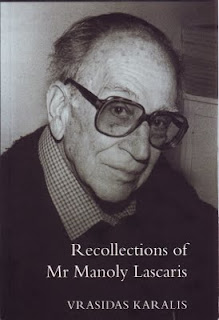 I have just received a fascinating book about Manoly Lascaris who was for many years the partner of the Australian novelist Patrick White. The book consists of records of the conversations its author, Vrasidas Karalis, associate professor in Modern Greek Studies at the University of Sydney, had over a seven year period as a young man with Lascaris, or "Mr Lascaris" as he insisted on being addressed. The conversations took place in Greek but the writing here in English is sharp and vivid. Vrasidas Karalis, whom I met in 2007 in Oxford when we were both delivering papers at a conference on Bruce Chatwin, is a very engaging, lively, and, on the evidence here, deeply tolerant thinker who put up cheerfully (mostly!) with the haughty patrician putdowns of Lascaris – who considered that he was descended from the Byzantine aristocracy. His bark, however, may have been worse than his bite and, in spite of his constant rebukes to his young interlocutor he clearly enjoyed the opportunity to talk about life and art in what is no less than a modern Socratic dialogue. One learns little about Patrick White, whom Vrasidas Karalis was translating at the time, and nothing about what Lascaris referred to as "the erotics" of his partnership with White, but it is a fascinating encounter with a provocative thinker who has previously not been allowed to come out from under the shadow of the Great Novelist. As Vrasidas Karalis says at one point: "Like Socrates, Lascaris was a wise old man who revealed unexpected truths through whimsical jokes and clumsy gestures." And again: "Manoly Lascaris never wrote anything, but he was a truly eloquent talker. He went directly to the heart of the matter, avoiding the periphrastic mannerisms of professional thinkers. He was a catalyst; his observations reduced everything to the basics." I strongly recommend this vigorous dramatic enactment of a surprising and unusual intellectual encounter.
The book is published in Australia by Brandl & Schlesinger
Posted by Nicholas Murray at 10:57 No comments:

Who's Afraid of Malcolm Lowry? 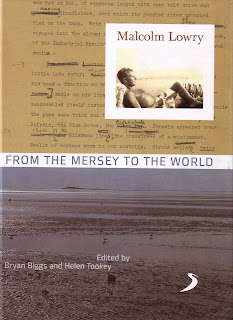 2009 is the centenary of the birth of Malcolm Lowry but you could be forgiven for not knowing this fact as it has attracted little attention so far. But a new book by many hands, Malcolm Lowry: From Mersey to the World is just about to be published by Liverpool University Press and there's an accompanying exhibition opening at the Bluecoat Arts Centre in Liverpool on 24th September when the book is launched. I have contributed a chapter on October Ferry to Gabriola with an autobiographical introduction explaining my choice of this, probably one of Lowry's lesser read works. There are lots of essays by a very varied cast of contributors under the helmsmanship of Bluecoat Director Bryan Biggs and Helen Tookey so don't delay!
Posted by Nicholas Murray at 14:14 3 comments:

Hot on the heels of J.M. Coetzee's Summertime comes another new novel from a contemporary master of fiction, John Banville. I have only just acquired The Infinities so I have nothing yet to say about its content but Banville himself was in London last night at the London Review Bookshop in Bury Place, Bloomsbury talking to a sell-out audience and reading from the book. Banville was on sparkling and witty form, and, after reading a self-contained section of the book he answered questions with great aplomb. Aplomb and tact, one might add, as the inevitable bores who are attracted to this kind of event put their long-winded and self-regarding "questions" to him. In a sense these "meet the author" sessions have little to do with the book (which most people would not have had the chance to read) and everything to do with the author's performance and my own reasons for being there were, I imagine, no different from most people's: to get a squint at a writer I have admired for many years. Engaging and funny with lots of pithy comments and lively opinions, Banville gave us our money's worth and we all dispersed into the muggy Bloomsbury night air clutching our signed copies of the book.
Ah, yes, the book. Now I shall open it at page one...
Posted by Nicholas Murray at 08:14 No comments: