Paris is sleeping now during August with the blinds pulled down on businesses en vacances but soon the annual burst of publishing, la rentrée littéraire will explode in France and the event is celebrated in The Independent with a piece about a new novel by a 15-year-old who has written about a 14-year-old who has lost her virginity.  Yes, folks, our equivalent of the rentrée is the silly season.  The article that we should have read was the one that said what was being published in France just now that was of interest, who were the serious novelists, what was the general literary health of France.  Admittedly we heard last week about the new Michel Houellebecq but then he has long been a news item in himself so we expect gossipy broadsheet pieces on him as a matter of course.  Given that a million British people are said to be living in France why is its literature so invisible in this country?  Why is so little translated?  We get the French movies in our art houses so why not more of its contemporary writing?

Recently, the critic and novelist Gabriel Josipovici, was reported as having said that contemporary British writers weren't up to much though, as he explained last week in a letter to the TLS, the reporting of his comments, buried in a serious work of criticism forthcoming from Yale UP, trivialised them.  He bravely refused to be dragged on to Newsnight to take part in a shallow staged debate about the merits or otherwise of Amis, Rushdie, McEwan et al.  His apparent argument that, in the wake of the great moderns, contemporary writing in Britain doesn't measure up, misses some vital dimension, sounds interesting and highly plausible.  So what of the comparable position in France?  Will we be told?  I doubt it.
Posted by Nicholas Murray at 09:34 1 comment:

The death at the weekend of Tony Judt, the author of Post War and Ill Fares the Land and a lively polemicist, who was always ready, from a broadly Left starting point, to tackle some of the Left's sacred cows, was suitably noted by the broadsheets.  I have enjoyed particularly his recent short pieces of reminiscence in the New York Review of Books and there's a good item today in the Le Monde blog where he is described as the "archétype de l’intellectuel engagé “à la française”".  The fact that one senses a gap now is eloquent.  The papers are full of opinionating pundits and the blogosphere is loud with noisy folk with things to say but here was someone who wrote, as in those recent NYRB pieces, with superb clarity and directness but with a wider sense of where things might fit in.
Posted by Nicholas Murray at 09:18 3 comments:

Josipovici And Other Animals 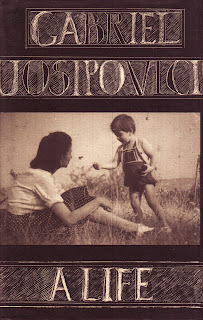 In my last post I commented laconically on coverage of a very interesting-looking book by the writer and critic Gabriel Josipovici, Whatever Happened to Modernism? which I will talk about later when I have caught up with it.  But I have just read his 2001 memoir A Life which I found a delightful book and perhaps a surprising one for someone whose reputation is as a somewhat austere and rigorous critic.  It is the life of his mother, Sacha Rabinovitch, as much as his own, their lives being entwined by the facts of history and exile, and he makes use of her (excellent) poems and family photographs to build up a picture of a remarkable woman.  Both were passionate animal lovers and there are some marvellous descriptions of the various dogs they owned and, inevitably, grieved over.  It's a story that passes through Egypt, France and England and I found it deeply absorbing.

Josipovici, in spite of having written an affecting memoir claims that he is suspicious of the genre.  He quotes his mother's view: "...to write one's memoirs is to cease to look forward.  It's a form of nostalgia and self-indulgence."   He says much later in the book that autobiography is unsatisfactory because: "A person can never grasp the trajectory of their own life, not only because that trajectory is not over till their life ends, but because a life is more than what one can say, it is more than one can think.. It can only be lived, not told – not told by the liver, that is, but only by another."  That is why he chose to write another person's life.  Again, he says: "A memoir would have left me to wallow in my sorrow; writing the life of another, of that other, was what I needed to do, and I now see why."  We can only be grateful that he overcame his reservations and wrote this book.
Posted by Nicholas Murray at 10:46 2 comments: