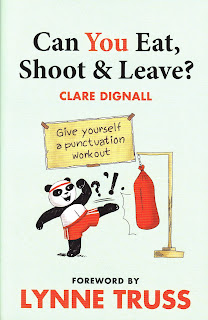 As someone who has had to teach writing skills to undergraduates (sometimes in "world class" institutions where one might have thought such a task unnecessary) I know that the basics of English grammar are not universally grasped even by the brightest of young minds.  This was the context of Lynne Truss's best-selling Eats, Shoots & Leaves which revealed a hidden passion amongst the British population for trying to get things right grammatically.  There were opponents, of course, in the shape of the academic professors of linguistics who (unlike the person in the street) didn't like the idea of prescriptive grammar and who argued instead that usage is the God and that permissive grammar is the only permissible version. No one, however, has taken much notice of them.

Now someone has come up with the bright idea of following the success of Eats Etc with a practical workbook, that helps you get on top of the good advice in the earlier book and try out its prescriptions for grammatical improvement for yourself.  It's a simple idea but an excellent one and saves you having to spend Tuesday nights in a drafty further education hall being taught how to do it. You can do these exercises at home with a G&T in one hand.  The author of Can You Eat, Shoot & Leave?, Clare Dignall, has put together a lively little workbook that is a lot more attractive to use than those big fat hortatory books about good usage (sorry Simon Heffer) that clog up the bookshops. There's a characteristically trenchant and funny introduction by Lynne Truss herself who makes the interesting point that never in human history have we done so much writing, as we scribble texts, emails, Facebook posts, tweets – you name it – all day long.  So it makes more sense than ever before for us to get it right.

Clare Dignall briskly takes us on a tour round the well-known troublespots of punctuation (beginning, of course, with the apostrophe) and not only does her book complement Lynne Truss's book, it has something of the same lively wit.  She points out, for example that the apostrophe is "obedient, enthusiastic, and capable of carrying out many important tasks" which makes it a bit like a much-loved spaniel: "However, that's where the analogy ends, because we are usually nice to spaniels."

If you have any difficulty with grammar and punctuation I would say this looks like a very good starting point.

P.S. When I was an English undergraduate at Liverpool University in the 1970s I proudly went to collect my first marked essay by the great Shakespearian scholar, Professor Kenneth Muir.  Would he congratulate me on the brilliance of my critical insights into The Tempest?  A very grave and professorial professor, Muir slid the essay across the table and announced in the tones of an Old Testament prophet: "You should never begin a sentence with 'however'."  I have not done so since. Actually, as Clare demonstrated in that sentence of hers I have just quoted, of course you flipping can.  Being exact in your punctuation doesn't mean being rigid and fogeyish.  It just means getting it right.