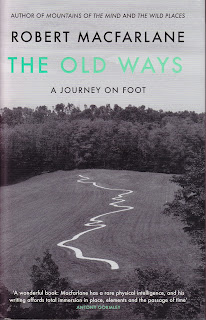 It takes a certain amount of chutzpah in these days when publishers are jumpily fashion conscious to risk a seemingly conservative title like The Old Ways but Robert MacFarlane is merely exercising his fondness for word play and his subject is not a Michael Gove-inspired return to basics but an exploration of the ancient pathways that thread the landscape at home and abroad.  It is about his explorations of those long distance paths like The Ridgeway (which years ago my wife and I followed in pouring rain for three days with a tent on our back) or the Icknield Way but also paths in Tibet, Palestine, Spain and indeed their watery equivalents, the seaways of the Outer Hebrides.  The subtitle is "A Journey on Foot" but this is a book about many journeys on foot in many places and in many weathers.

One of MacFarlane's central arguments is that we are made by landscape as much as we might think we make landscape by gouging our tracks across it.  There is, he implies, a dialogue going on between us and our feet and the ground we walk on, the geology under us and the skies above and the past is very much present on these old ways, shaping us, making us what we are, changing us.  At one point he chooses for a chapter's epigraph a quote from two recent authors, Tim Ingold and Jo Lee Vergunst: "Since to follow a trail is to remember how it goes, making one's way in the present is itself a recollection of the past...onward movement is itself a return."  The book has a pleasing architecture and MacFarlane has a fine and vivid gift for making all those landscapes come alive.  His description of a walk on the Broomway which connects, notoriously and treacherously, the island of Foulness to the coast of eastern England is a tour de force of subtle descriptive writing.

In a characteristically over-the-top review of this book in The Observer William Dalrymple recently tried to fit MacFarlane up with the mantle of Bruce Chatwin but it turns out that the latter is dismissed very early on with a curt reference to his "flawed" thesis in The Songlines. Why or how it is flawed the reader isn't told but there are many stylistic features of the book that call Chatwin to mind: the habit, for example, of arriving at a place and instantly connecting with "my friend X" who just happens to be the global authority on the pertinent aspect of the place and also possessed of incalculable gifts of intellect, scholarship, facility in languages etc etc.  In this school of travel-writing one never spends time with the ordinary or the ungifted person.  There is a classic passage on p276 ("I asked Jon about the lives of the early Buddhist saints...") where the sort of dialogue never heard outside a seminar room is fully reproduced in the way that Chatwin loved to do.  Actually, I don't mind because this is a highly informative book from which I learned a great deal and MacFarlane, a fellow of a Cambridge college, putative new Chatwin or not, turns out to be a very companionable guide, who doesn't take himself more seriously than he is entitled to and whose book is the product of much walking, much reading about walking, and much reflection. This gives it a mellowness and richness that adds to its charm.

MacFarlane is very much taken with Edward Thomas (who has been making quite a comeback recently with the reading public) and that poet's ideas about memory and landscape both being "in flux".  The connections between past and present, landscape and mind, in Thomas's writing fit very well with MacFarlane's own obsessions.  Like Roger Deakin another knowledgeable man in the woods, MacFarlane writes informatively but also very personally about his own experiences (nearly freezing to death in Tibet, having a scary night in the haunted Chanctonbury Ring etc) and I found this a hard book to put down as reviewers of whodunnits say.

And what a co-incidence that it should end at exactly the same place that Jean Sprackland's recent book Strands* ended: on the beach at Formby, north of Liverpool where some remarkable fossilised neolithic footprints have re-emerged from the sand – giving a nice closing metaphor of print/footprint, past/present as the author measures his footprint against that of a prehistoric hunter gatherer.

*my review of Sprackland's book will be appearing shortly in The Independent
Posted by Nicholas Murray at 19:01 1 comment: 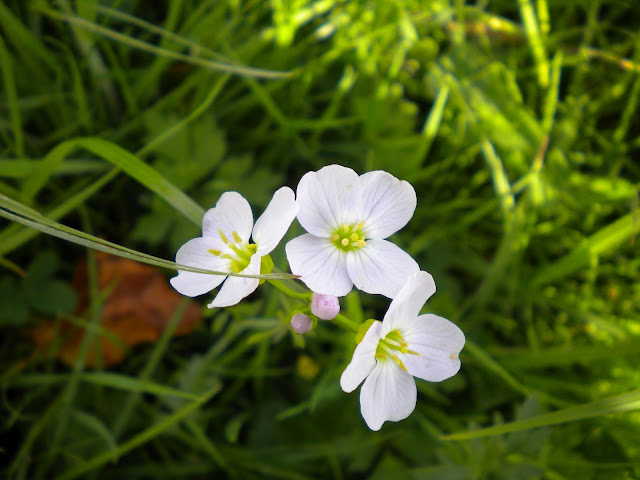 Ceaseless rain but the flower books say that this Cuckoo Flower (aka Lady's Smock and Milkmaid; cardamine pratensis) is "damp-loving".  It looked beautiful this morning in its soggy Radnorshire field.
Posted by Nicholas Murray at 17:51 No comments: