How Was Your Bloomsday? 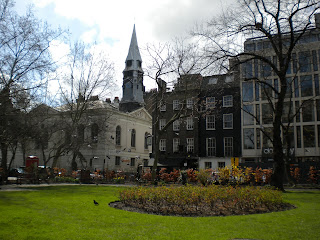 Being reminded, during the research for my recently completed book about Bloomsbury, that Ted Hughes and Sylvia Plath were married on 16th June 1956 in St George the Martyr church (see picture) in Queen Square, Bloomsbury, on Bloomsday, has triggered some thoughts about literary anniversaries.   Is it just a weeny bit silly to celebrate today as Bloomsday, a fictional day across which the narrative of Joyce's masterpiece, Ulysses, unfurled?  I think it isn't – because to say that today is Bloomsday is to allow the imagination to prevail over mere fact and routine.  A work of art has managed to usurp the work diary.

The sun is shining, the longest day is still to come, and I have a feeling that a re-reading of Ulysses is on the way.  My lovely green Bodley Head 1960 edition [I don't give a fig about the 'Joyce Wars' of the scholars over which text is to be preferred] is on the shelf, waiting to be taken down: "Stately, plump Buck Mulligan came from the stairhead, bearing a bowl of lather on which a mirror and a razor lay crossed..."

Definitely.
Posted by Nicholas Murray at 08:54 No comments: 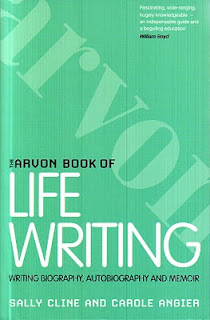 I am glad to break a long silence here at this blog (I have been finishing two books and making a trip to the USA) by announcing that the new Arvon Book of Life-Writing (Methuen) written by Sally Cline and Carole Angier has just been published and I am honoured to be one of 32 biographers whose brief reflections on the genre have been included.  The book, by two experienced biographers, will be indispensable for people doing courses on life-writing and covers practical and theoretical issues raised by the genre of biography, autobiography and memoir.

Anyone in London interested in this subject might like to know that I am teaching a 12-week course on it at The City Lit this autumn.
Posted by Nicholas Murray at 09:23 4 comments: