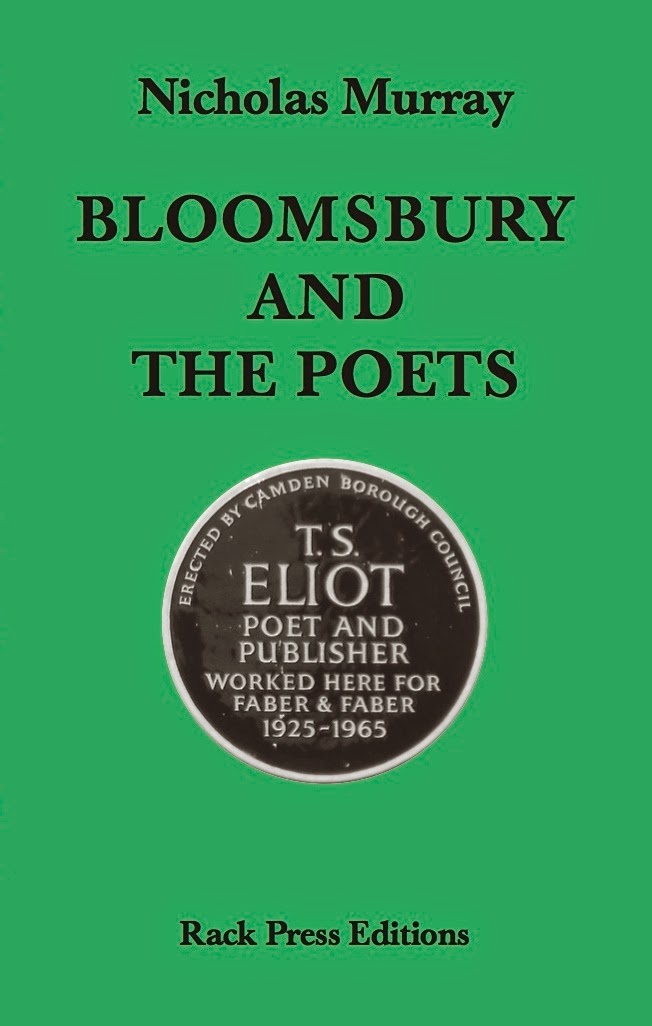 Today is publication day of Bloomsbury and the Poets, the first title in a prospective series of prose books from the new imprint Rack Press Editions.  It is a short book about the poets who have lived in Bloomsbury and, as you might imagine, there are plenty of these. You can obtain the book directly from the Rack Press website at a discounted price of £6 rather than the full price of £8.

This morning the TLS diary has an item on the book by the inimitable JC who mentions that a few details (unsurprisingly) were familiar to him from my earlier book Real Bloomsbury.  Actually there is a great deal of new material including much more on Bloomsbury's major woman poet, Charlotte Mew.


Posted by Nicholas Murray at 08:25 No comments:

Thank You is the Hardest Word

Just back from my annual visit to Greece I was struck by the number of times I heard people say, in English, "thank you".  It must be the current fad, like people saluting each other in trendy wine bars with "Ciao!"  I didn't just hear it in cities but also, for example, in a tiny Dodecanese island where someone had just lifted a woman's push-chair over an obstacle at the entrance to the church where a local festival was going on.  It's ironic that this comes at a time when the word, rather like "please", is going out of fashion in the country of its origin.  No one under the age of 25 says any more: "Please can I have a coffee" but "Can I get a coffee", if my controlled scientific observation of three people in the queue in front of me at Paddington station can be accepted as legitimate data.

I recently had a letter from a well-known journalist and writer to whom I had sent, unsolicited, a copy of my recent satirical poem, Trench Feet, published in April by Rack Press.  He didn't know me and I didn't know him but since my satire on the current WW1 media clichés chimed with a recent polemical piece he had written in a national newspaper I thought he might be interested.  He had gone to the trouble of writing an actual letter to someone he had never met.  It reminded me that nearly everyone else to whom I had sent the poem (except those who bought a copy and who later wrote to me in uncharacteristically large numbers, i.e more than five) had maintained an impeccable silence. Were they right to do so?  After all, an unsolicited gift is like internet spam, there is no obligation to pay it any heed.  We no longer live in an Edwardian world of formal manners.  And why was I doing it?  Soliciting some free praise that I could paste on the cover of future editions?  Fishing for compliments?  Advertising my self-importance?  I think it was none of these. I just thought that some people I knew would be interested.  It's a bit like returning someone's smile in the street as you nearly collide.  It's what people used to do.  It's called human communication.  It's a social medium.

It's actually very easy to deal with this sort of thing by using any of a number of ready-made phrases like: "Thanks for this, I look forward to reading it," which doesn't commit you to saying anything once that promised reading has happened, if it ever does happen.  You don't even have to reveal the fact that you sense you are going to loathe it.  You have acknowledged your friend/acquaintance's gesture and that is enough.  You are not obliged to like anything your friend has written.  Instead, I was greeted by silence from the sort of people who spend hours every day tweeting and posting and blogging on social media.  All that scribbling and commenting, it seems, leaves no time for a simple "thank you" (in English or Greek).  Life is too short; we are all too busy...Here's a picture of my dog eating a copy of the Guardian Review.  Likes (47)

What would I do in such circumstances?  Surely a quick email or card?  I hope so, and this has made me more determined than ever to make sure that I remember to respond to anyone who sends me anything as a personal gift, because I am sure I have forgotten to do so on occasion.  A reminder of which occasion exactly: that is definitely something that would send a tremor through someone's tweeting arm.

Posted by Nicholas Murray at 08:19 No comments: