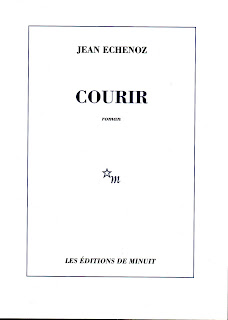 My second toe dipped into the water of the new French publishing season is the new Jean Echenoz, Courir, about the legendary 20th Century Czech runner, Emil Zatapek. The last novel of Echenoz, Ravel, was singled out by Gabriel Josopovici as his TLS "International Book of the Year" in 2006 and the new one has some similarities. It is a beautifully executed portrait of a man and his art (running where the last one was about composing) written with what Le Monde in its review calls sa manière élégante et joueuse – his playfully elegant style. There is an exquisite subtlety and pace and the driest and most delicate of ironies in Echenoz's unfolding of the story of this extraordinary athlete who broke all records, was fêted by the régime then sent to work in a uranium mine when he supported the Prague Spring. Disdaining style as a runner, his arms flailing like a windmill and his face contorted with pain, Zapatek's stolid determination [a metaphor for writing's solitary assault on the stark cinder path?] is conveyed by Echenoz in a style which, says Le Monde, weighs every word, if not every comma, with scrupulous exactitude.

Will it translate? One of the best contemporary French novelists, Jean Echenoz has been translated (though Ravel waits) once or twice but he is hardly a name to British readers. We seem to like our novels laid on with a wee trowel and this minimalist finesse is, perhaps, not what the British bookbiz scouts have been told to look for.
Posted by Nicholas Murray at 14:38 1 comment: 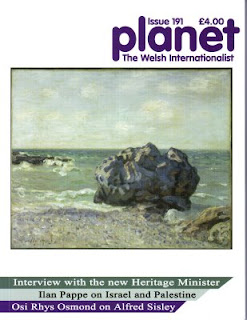 I interview the poet Anne Stevenson in the latest issue of Planet magazine and I think she has some very interesting things to say about her own poetry and the poetry scene in general.

Planet, as I have observed before here, is one of the indisputably Good Things about Welsh culture and is always worth a read.
Posted by Nicholas Murray at 12:10 No comments:

Down by the Old Canal: Poetry in Venice 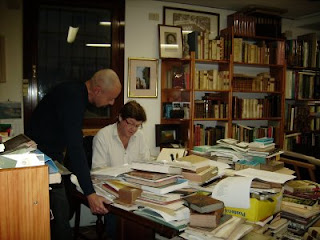 I am just back from Venice where I had a very enjoyable experience reading from my poetry collection The Narrators and from some more recent work. My host was the poet and bookseller John Francis Phillimore, seen here attempting to translate the last of a group of my poems into Italian, an hour or so before the event at his HQ, Old World Books on the Ponte del Gheto Vechio in Venice. A phrase from my slightly fanciful poem "Landscapes" that reads "the man with khaki shorts who writes books in the winter" was exercising John and his assistant at this point while I cowered in another corner of the shop clutching a glass of Prosecco. It was a thoroughly enjoyable evening in which we took over a local trattoria and enjoyed a splendid meal and wine. I hope the poems flowed too.
Posted by Nicholas Murray at 17:35 1 comment:

This attractive thought comes from the new Nobel Prize for Literature winner, Jean-Marie G. Le Clézio. We are accustomed in Britain to greeting Nobel Laureates with baffled incomprehension on a sliding scale from guilty ignorance of the range of world writing to (more often) defiant parochialism. In this case I am ashamed to say I hadn't even heard of Le Clézio but he sounds interesting.

"My message is that we have to go on reading novels because it is a good way of understanding the real world. The novelist is not a philosopher or a technician of language but someone who writes and asks questions."
Posted by Nicholas Murray at 06:42 No comments:

How Much Should you Write?

In this morning's Independent books pages, literary editor, Boyd Tonkin, struck by Tony Blair's claim to have written the first 16,000 words of his memoir in 4 days, asks: "How quickly should authors write?" In my experience the most common question asked when a writer meets the public at a bookshop or signing is: "How long did it take you?" I find the question impossible to answer. Firstly, my time, as a full time freelance author gets better results than an academic who has classes to take, essays to mark, admin to perform. So my two years might be equivalent to a don's five years. In addition, most of the time on a non-fiction book is spent on research. The writing is the shorter bit. But the real problem is that no one wants to be honest. With the example of these Flaubertian perfectionists who write 150 words a day who is going to admit to 1500? Actually, I think that figure is probably the truthful norm. A non-fiction writer can produce more, not least because cutting and pasting quotations of 200 words or so isn't exactly creatively exhausting and it boosts your word count. On the other hand, you can actually achieve minus figures if you approach your desk and find that the 1500 words you had built up since the start of the week are actually no good and you must delete them. Sometimes, in writing you go backwards in order to advance.

I once created great amusement with one of my writing students by comparing myself to a carpet-layer. If I had to fit a carpet it would take me a week to do one room. I watch with amazement, therefore, when professionals whip in and do it in less than an hour. If you are skilled, gifted and have a natural aptitude for something you will do it more quickly than someone who writes only one letter or email a week with laborious slowness. Don't believe them if they tell you they just write 400 words a day for a living.

[The above took me nine minutes!!]
Posted by Nicholas Murray at 09:49 9 comments: