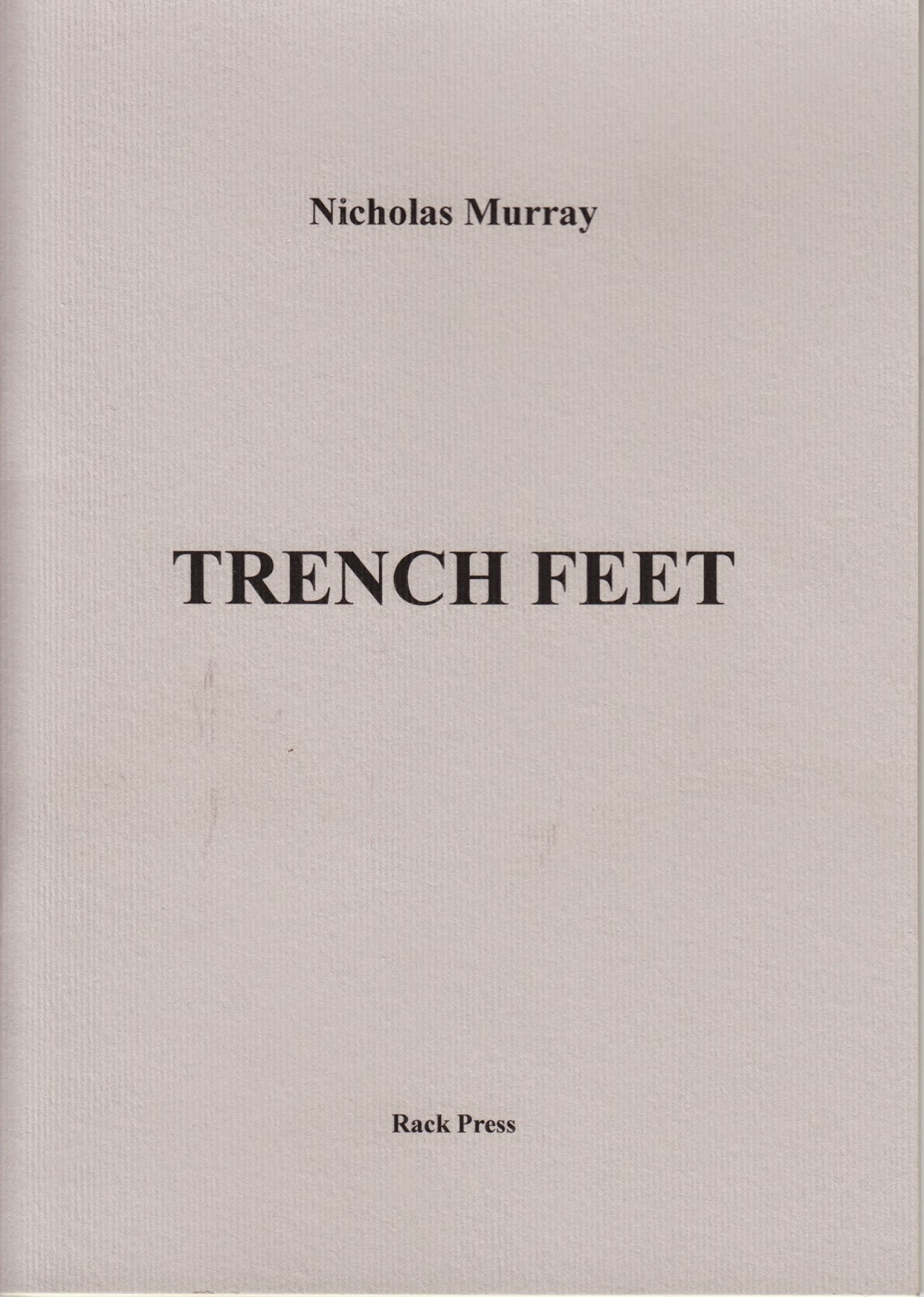 Satirical poetry is relatively thin on the ground just now – it can hardly be for lack of provocation – but I have found that my own attempts have been sufficiently well received to make me think that it is worth more writers having a go.  I have tended to think that it works best when using relatively formal metres but of course that isn't a hard and fast rule.  My satire (or do I mean diatribe?) against the Coalition Government, Get Real!, published by Rack Press in 2011 used the very satisfying form perfected by Burns and my most recent one, Trench Feet, also from Rack Press earlier this year, has just earned some kind words from the Poetry Book Society selectors.

The PBS pamphlet choice for this quarter is Holly Hopkins' Soon Every House Will Have One (Smith/Doorstop) but they singled out several runners-up, including Trench Feet about which they wrote in the new PBS Bulletin: "After Get Real!, Murray's 2011 pamphlet satirising the Coalition Government, he now turns his attention to the celebrations of the centenary of the First World War.  Here bright, ambitious academic Jeremy Button, is commissioned to make a TV series focusing on the War Poets, but things do not go according to plan in this witty and erudite lampoon."  I should say that the wildly exaggerated scenes satirising a London literary prize-giving party are drawn from life but, no, I am not going to tell you where and when!

Posted by Nicholas Murray at 12:05 No comments:

Mass Escape from the Zoo!!! 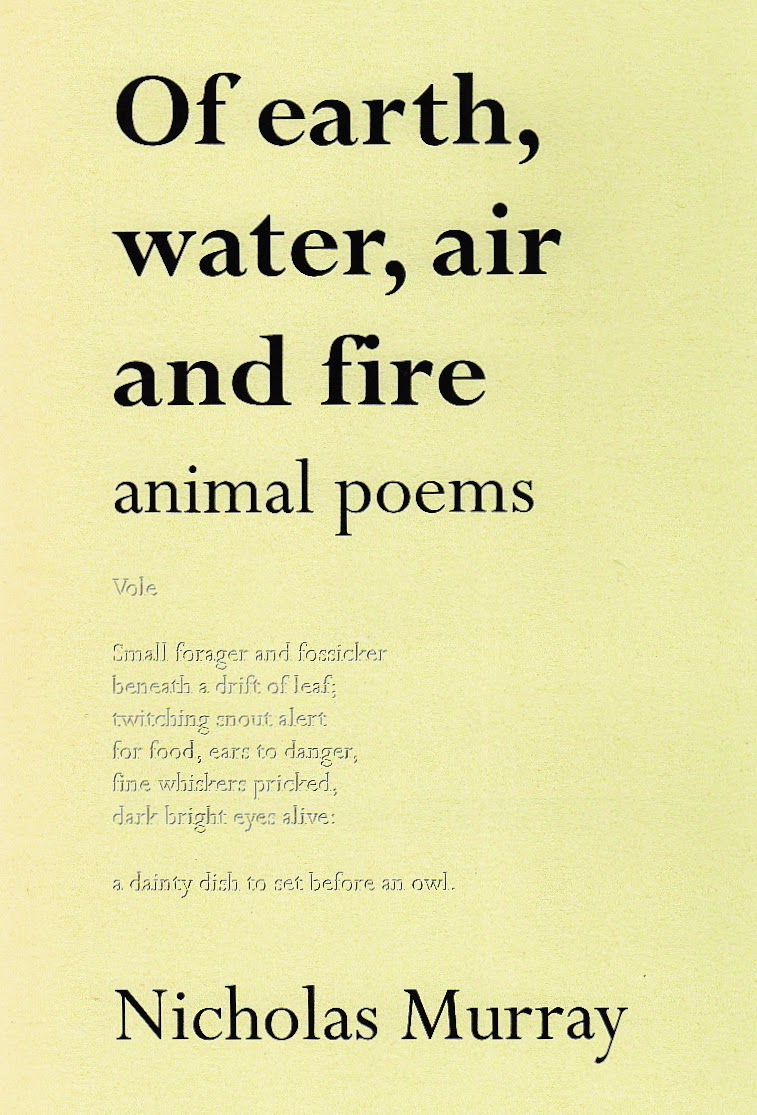 What is happening?  The thunder of animal hooves rushing down the gangplank from the Ark is being heard everywhere.  Ted Hughes's Bestiary just published is only the latest in a surge of animal poem collections.  I have even contributed to it myself.  Pascale Petit's Fauverie from Seren containing poems sparked by the Paris zoo, John Burnside's latest collection, poets in residence at London Zoo, workshops on animal writing...where will it end? It is good, I suppose, that we are all being tender towards our fellow creatures on this planet.


My collection of animal poems (pictured here) can be ordered online from Melos.
Posted by Nicholas Murray at 17:38 No comments:

It suits a certain kind of scribbler to see themselves as an heroic outsider, speaking freely, beholden to no one, unlike the footling and pedantic scholars with their smug tenure, impossible sentences and saeva indignatio or do I mean odium theologicum? (We can do the Latin too).  In reality the old tussle between Grub Street and Academe no longer works and all of us are running after the same small (diminishing?) group of serious readers.  The self-indulgence of these past quarrels is indeed a thing of the past.

These thoughts occurred to me yesterday as I dipped through the mediaeval portal of Wadham College, Oxford, to deliver a paper at the English Association conference on British Poetry of the First World War.  My subject was "How 'Anti-War' were the War Poets?" and I argued for 20 minutes that the received wisdom that the poets of WW1 were 'anti-war' was not a piece of wisdom at all and that only the true pacifists could lay claim to that label.  I see Owen and Sassoon (decorated soldiers who pressed to go back to the front) as more 'anti-heroic' in their writing than 'anti-war'.

My audience unexpectedly (for me) included the poet Michael Longley whose new collection, The Stairwell, from Cape I had just read. It was a great pleasure to meet him and to hear him tell the hall he liked my paper.  Everything was charming and well-mannered with not a hint of odium anywhere and my nervousness (even as the author of a book on the subject of WW1 poetry) at addressing the scholars soon vanished.  In subsequent sessions, however, I discovered that Jeremy Paxman was not in such a favoured position and was honorary bogeyman of the day.  Absent also was the terrible theoretical jargon (the awful intellectual puns that made one wince, the turgid half-digested philosophy from Eng. Lit. academics not trained in philosophical discourse) of a decade or so ago.  Everyone is speaking plain English again and I could understand every word.  "I know, too, how apt the dear place is to be sniffy," Matthew Arnold said of Oxford in the 19th Century but it certainly wasn't yesterday.  In fact Grub Street (as represented in my latest verse satire, Trench Feet) is more likely to be snobbish and 'sniffy', with more cold-shoulders in the average literary or publishing party in London than in this gathering of friendly and communicative academics and teachers.

During the delivery of my paper I kept hearing a frantic buzzing vibration in my pocket from my silenced mobile phone.  Later I discovered that people had been tweeting my argument as it unfolded. I hope it didn't diminish their attention.  In fact it was the Grub Street Irregulars like me who seemed to lack the audio-visual flair and I felt rather old-fashioned arriving without memory stick Power Point or handout and relying on words alone.

The conference concluded with a panel on "The Historians v. The Poets" where the consensus seemed to be that this was a phoney war and that the alleged distorting effects on public consciousness of poetic representations of it were unproven and that both poetry and history were legitimate ways of exploring what happened.  Someone suggested from the floor that poets and historians should make common cause against the real culprits: the politicians who got everyone into this mess in the first place.
Posted by Nicholas Murray at 09:35 4 comments: