The fact that it is nearly four months since my last post perhaps says all that needs to be said. When the idea of the literary blog was first launched it seemed like a great idea. With one bound Jack or Jill was free of the suffocating restrictions of the literary establishment. One could now say what one liked, ignore the prevailing assumptions of the literary world, champion a different set of writers, and be listened to for this final miracle seemed true. Literary bloggers were being taken note of.

Of course the Bibliophilic Blogger never took itself too seriously and was probably not itself taken seriously but it was fun to do at the beginning. Since those heady days, however, we have all been washed away by the floods of online matter and the shorter and sharper social media like Twitter are more than enough to cope with.

Last Sunday at the Ledbury Poetry festival I read (see picture) below the ancient market hall my latest poetic satire A Dog’s Brexit and other political and topical poems to a lovely receptive audience who afterwards cleaned me out of the entire stock of books and pamphlets I had brought with me. Thank you to them all. When I was being introduced by the Festival Chair, Peter Arscott, he mentioned the Bibliophilic Blogger and asked shrewdly whether I was still writing it. “Intermittently,” I replied, shiftily.

I have a feeling that intermittence will be its continuing fate.  Or maybe not? There could be life in the old dog yet. 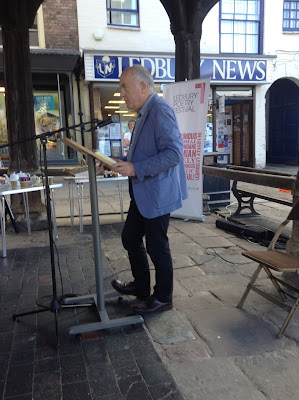