The Great War Approaches: Echenoz and 14 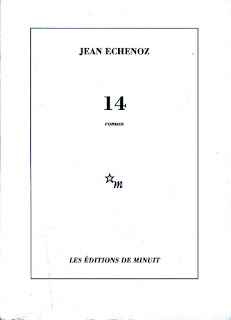 Less than a year to go and already one can hear the distant crackle of machine-gun fire: 2014 is coming and, I think we can predict with reasonable certainty, The War will be mentioned obsessively and will dominate the media all year long.  Having written a book myself on the poets of the First World War I am hardly in a position to demur but I must confess to a certain dread of the first onslaught.

The dry, cool observation of Echenoz takes these five copains from their village in the Vendée on the Atlantic coast to the Ardennes.  They are ordinary young men, working at ordinary trades and the novel – not in any crudely buttonholing sense 'anti-war' –  shows exactly what 'état' they return in.  Echenoz, unlike his fellow-countryman Louis-Ferdinand Céline, whose rage against the War in Journey to the end of the night makes all our English war poets look rather tame, lets us feel what its human impact is in a more unemotional way yet with an astonishing clarity.  His description of the shooting down of one of the young men by a German fighter plane is a little masterpiece of close observation that makes you feel you are there yet so few words are expended on the task.

I hope that when the great tsunami of 2014 washes over us there will be at least one or two contributions here that match this precision and restraint but I am not holding my breath.
Posted by Nicholas Murray at 08:57 No comments: