Hype and the World of Books 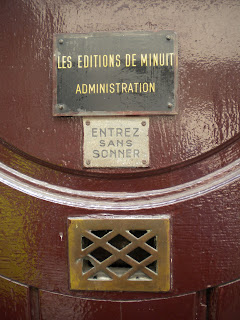 John Banville's new novel Ancient Light, which comes with a perfectly intelligent and sensible blurb carries also on the front cover a comment of a kind that makes one wonder about the people who work in book marketing (in this case Penguin Viking).  It is one of those pre-emptive puffs of which the trade is so fond (the book had not been published and not reviewed when this was set in type) and it comes from Sebastian Barry: "Could any book be better? Did it even need to be as tremendous as this?"  Yuk!  This is indeed (despite the haughty reservations of today's TLS) a very good book and I loved it but what is the point of a silly piece of overstatement like this? Did the wry and self-mocking Banville approve it? (My guess is no, authors, like everyone else in publishing, are subservient to sales and marketing.) One could multiply examples of this sort of thing with ease and what a contrast with other countries. Like France, for instance.

In Paris recently I paid the visit of a pilgrim to rue Bernard Palissy on the Left Bank which is the HQ of Les Editions de Minuit, one of the finest French publishers with a small but always distinguished output.  Rue Bernard Palissy is a little back street blocked when I walked into it by a large van which was unloading into the rear of a building, cancelling any hint of chic. Minuit's offices consist of a small window which was modestly featuring Jean-Philippe Toussaint's Autoportrait (à l'étranger) and not much else.  Toussaint's characteristically spare and elegant book of impressions of Japan, Berlin, Prague etc has just been re-issued as a paperback in the "Collection 'double'" series.  The mark of this publisher has always been an austere minimalism of design, plain white covers, no illustration, no author photographs, no prolix blurbs etc.  The tacit assumption is that all one needs is to read the book and all one learns about the author is contained in one sentence: "Jeanne-Philippe Toussaint est né à Bruxelles en 1957. Il est écrivan et cinéaste."  For the paperback a concession has been made and we have a discreet one line quote from the Libération reviewer and, on the cover, a photograph! It is a reflection in a shop window of the author in Tokyo taking a snap of himself in the rain under a transparent polythene umbrella.  But that is as far as it goes.

To the left of the display window is a battered maroon painted door (see picture) which merely says "enter without ringing".  No glitz, no life size cardboard cutouts of Samuel Beckett, no potted plants, no Sloaney receptionists.  Just a small house which publishes exquisite fiction (too little of it translated into English) and leaves it at that.
Posted by Nicholas Murray at 08:23 No comments: 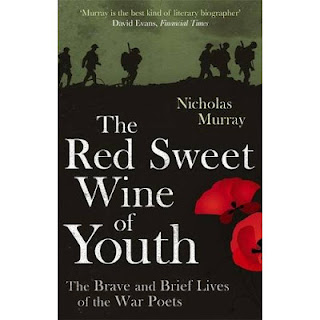 The paperback of my book about the British poets of the First World War, The Red Sweet Wine of Youth, is published at the end of the month and you can order it now (the Amazon link is here to the right of this page if you prefer to buy it that way).  I hope it's a concise and useful account of a dozen of the main poets and the literary background from which they emerged.  Like many British schoolkids I was brought up on Owen & Co and poems like his "Dulce et Decorum Est" which, we were told, expressed "the horrors of war".  They certainly did that and the horrors of the trenches need no embellishment but I try in the book to give what I hope is a little more nuanced view of the poets' attitude to war and in particular I try to represent Sassoon's protest against the war in what I also hope is a more accurate way than it is often represented.  I hope you enjoy the book.
Posted by Nicholas Murray at 11:47 No comments: