The Amazon saga continues as I discover their "three strikes and you're out" policy of dealing with customers.  I mentioned in my last post their appallingly discourteous policy of sending you an email that you can't reply to.  It is like talking to someone in a high-security compound through a tiny grille.  Each time they failed to answer my point I went laboriously back to their website to leave another comment but after my third attempt they sent a chilling statement: "We regret that we have not been able to address your concerns to your satisfaction. Unfortunately, we will not be able to offer any additional insight or action on these matters."  I think that what they were really trying to say should have been expressed with a row of asterisks.

Amazon also claimed that once an order is placed: "we will try to source the item from our suppliers" which is indeed what has happened over the past five years of the Rack Press, but not any more because there has been no attempt to "try to source the item" from this year's titles as disgruntled customers have been telling me.  I know this for a fact because I am the person who would supply such a request.  The net result is that Amazon refuses to discuss the matter any further, refuses to remove my titles from the website, in spite of the inaccurate statements there, and refuses to source any of the items it insists on listing.  They are as responsive as an absolutist monarch or a Stalinist apparatchik.

Still, it is comforting to read their slogan: "We strive to be Earth's Most Customer-Centric Company. Your feedback helps us build it."
No comment.
Posted by Nicholas Murray at 10:14 2 comments:

As a small publisher of poetry pamphlets (see Rack Press) I naturally seek as many outlets as I can for my titles.  Once a new title is registered with Nielsen Book Data it appears automatically on Amazon/Blackwell/Tesco etc.  You have no choice about this and there shouldn't really be any reason to object to more publicity and points of sale but Amazon, acting in their usual peremptory fashion, have indicated on their site that Rack Press titles are "Temporarily Out of Stock".  This is complete nonsense but the message is going out to all potential purchasers who are being told that new titles in plentiful supply are "out of stock".  I approached Amazon (you can't do this directly but only by using a web-based pro forma) and pointed this out and I was greeted with an automated reply not admitting that their previous policy had changed (for the past five years they simply source our titles from a wholesaler and I supply them, a system that has worked well) but inviting me to join something called Amazon "Advantage" where you pay money to them to keep stocks in their warehouse.  For a small poetry press with short print-runs of limited edition titles this is not realistic.  I persisted and received an email from a named person but the email was rigged so that one couldn't reply to it.  It merely repeated the standard response.  I have asked them to remove titles from their site because this is the only way to end this damaging falsehood that titles are out of stock.   One's sense of frustration is that Amazon appear to hold all the cards and not to care a jot about what they may be doing to small publishers. 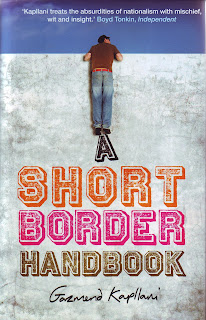 Little enough contemporary Greek writing is translated into English so it's always good to see something new.  Gazmend Kapllani's witty 2006 account of the life of Albanian migrants in Greece, translated by Anne-Marie Stanton-Ife, has now been published by Portobello Books.  Kapllani writes with bitter humour about the realities of being a migrant, shrewdly observing that some of the Greek hostility towards Albanians comes from not wanting to be reminded of their own history of having to migrate to survive.  If you were a tourist, he suggests, "your broken Greek would endear you to people...but when an Albanian speaks broken Greek, he is classed as nothing more than a 'bloody Albanian'. When an American speaks perfect Greek, he is an 'exceptional American', but when an Albanian speaks perfect Greek, all he hears is, 'You'll never be Greek!'

This short book is written in thirty sections which combine the stories of a group of those Albanians who, after the fall of the Communist regime, poured over the border with Greece, as Kapllani himself did in 1991, with reflections on what he calls "border syndrome" which is "an illness that's difficult to describe with precision".  There are vivid moments, like the first visit of the Albanians from a brutal and Spartan political regime to a supermarket in northern Greece, and overall the book offers an insight into the condition of the migrant in a week when British newspapers reported the deaths from hypothermia of some European migrants living in tents in the British countryside.  We tend to think that exploitation and hardship of a kind meted out to migrants in our midst happens elsewhere, not in the farms that supply our cheap supermarket fruit and vegetables, making us complicit in that suffering.  Fortunately, migrants of this kind conveniently stay out of sight so that we don't have to think about them and our responsibility for what they go through.
Posted by Nicholas Murray at 09:00 2 comments:

Clough and The Blue Plaque Business 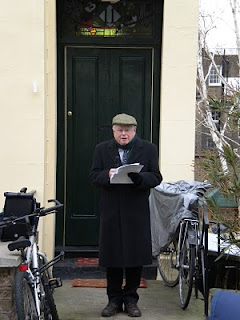 To North London yesterday for the unveiling of a plaque to the poet Arthur Hugh Clough (1819-1861) at the house in St Mark's Crescent, NW1 where Clough lived from 1854 to 1859. According to Clough scholar, Sir Anthony Kenny, pictured here, the poet didn't, er, actually write anything while he was here, but anything that raises the profile of this excellent and astonishingly modern-sounding Victorian poet must be a good thing. Talking afterwards to someone from English Heritage, the body that masterminds the plaque-business, I thought I sensed some scepticism about Clough's status, not so much in the canon of English poetry (the poet Christopher Reid who was there agreed with me that he is one of the best half dozen English poets of his period – which seemed to astonish the heritage people) as in the canon of The Higher Celebrity. When I suggested en passant that there should be a plaque to William Empson, author of that classic of 20th century literary criticism, Seven Types of Ambiguity, on the house at 65 Marchmont Street, Bloomsbury where the book was written in 1929-30 I was the recipient of one of those oh-God-here's-one-of-those-loony-obsessives looks. I can see that it's hard for the adjudicators to judge who is deserving of this kind of honour but I had that feeling I often get in these situations of sudden gloom induced by the mournful tolling of the great lugubrious bell of English cultural populism. Just like being in a publisher's office and suggesting a life of Arthur Hugh Clough, for example, when embarrassed faces turn to the window and someone suddenly finds there is a phone to answer. In a culture of lists and rankings and "no one reads people like X" how can the heritage industry buck the trend of sticking with what's safe and consensual?
Posted by Nicholas Murray at 08:20 1 comment: