The British Library: Work for Free!!!

We are now in the era of the new progressive politics with everyone championing "fairness" at every turn so hats off to the British Library which has just sent me news of a job I might like to apply for.  Actually it turns out not to be a job at all but a chance to be a work-donor.   The "job" is for someone to work in the internal communications department and the job description is a serious one that looks as though it might require some skills and experience.  Here's an extract from the advertisement:

"writing for our staff intranet and newsletter; creating intranet pages; monitoring the team’s day-to-day work; updating notice boards and generally helping out with the administration in our department.  We’re looking for someone with great communication and interpersonal skills...An interest in marketing communications and/or public relations, an excellent standard of written English and the ability to use a PC and the internet would be of advantage."

There's just one catch: you don't get paid.  This is of course a job for an unpaid skivvy, aka "intern".  Once upon a time young graduates (for that is my guess as to whom the likely appointee will be) got real work experience by doing a real job (in fact this one sounds a bit like my first media job) but now a public body like the British Library (Chief Executive's salary £195,000) is cynically hoping to get work done by not paying someone at all.  Did the staff unions agree to this?  Where will the employee live? How will they pay the rent?  How will they eat?

It could be worse because there are reports that in the US, graduates actually pay in some cases for the privilege of being a work-donor.  But is this going to be the pattern now in the British public sector?

But I agree, "fairness" is a good thing.  I can't get enough of it myself.
Posted by Nicholas Murray at 14:17 4 comments:

Gillian Tindall: A Microhistorian in Paris 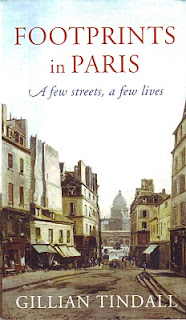 Having recently read Gillian Tindall's The Fields Beneath about the rural  roots of Kentish Town I was glad to receive as a birthday present her latest, about the Latin Quarter of Paris, the changes to it over two centuries since an ancestor of hers, Arthur Jacob, arrived there in 1814, and her own family history: Footprints in Paris.  It's an attractive, slowly-unfolding book, that gets under the skin of a place where she lived as a young woman in the 1950s and reveals her skill at teasing out the history of place that is so strikingly done in The Fields Beneath. In the throes myself of writing a book about Bloomsbury, I am fascinated by this kind of "microhistory" as it has been called, that reads the urban landscape with minute attention.  Quieter in tone than the more hyped "psychogeographers" of London, I found this a very moving book about how one tries to imagine other lives and their passage through history.  I was struck particularly by her observation that the Latin Quarter has slowly been emptied of its working class or ordinary population as gentrification, the surest of urban trends, removes the cheap "hotels" or long-term lodging houses, places where people without lots of money (students, workers, artists, writers, recent migrants) could once live.  Their future is to be shipped out to the suburbs and tower blocks with their "social problems" (which really amount to a rupture from real living communities and the difficulty of re-inventing them in concrete jungles).  Public housing at affordable rents once enabled a range of social classes to live in the heart of London.  This is not about sentimental nostalgia; it's about the idea that communities are just that: organic patterns of multi-cultural, multi-class, living where change is of course part of that organic life but also variety, social mix, and even a bit of scruffiness.
Posted by Nicholas Murray at 17:49 6 comments: