The recent non-story about Kafka's papers which involved (apart from repeated wince-making use of the word 'Kafkaesque') various talking heads telling TV interviewers that they had nothing to say – but they were going to say it –  about what the disputed trunks of hitherto unopened papers might contain had one interesting contribution from John Banville which I recommend for its view of what is best in Kafka and its encouraging re-iteration of the fact that the greatness of Kafka's art lies in his lack of a 'message'.  To see his contribution click here.
Posted by Nicholas Murray at 10:07 1 comment:

Bruce Chatwin by Bike and Who Owns Kafka?

What is the connection between Bruce Chatwin and cycling?  And you thought the exams were over now? The answer is that he pops up on next week's (27th July) episode of Britain by Bike, a series in which presenter Clare Balding follows in the footsteps (or is that pedals in the groove of?) a 1950s classic bicycle tour guide.  The series opens tonight on BBC 4 at 20.30 and next week's show at the same time has Clare striding across a lawn in the Welsh borders to encounter me just about to spout on the subject of Chatwin (about whom I wrote a book in 1993) who stayed at the house in the Welsh Marches where the filming took place, while writing his novel On the Black Hill.


[You can now see this in BBC iplayer for a limited period. Click here


Yesterday I had a call from the BBC World Service to appear live on their early evening news programme to be interviewed about the controversy surrounding the Kafka archive.  Ten boxes of material formerly owned by Esther Hoffe, secretary to Kafka's friend, Max Brod, who left them to her and who famously defied Kafka's request that all his unpublished writings be destroyed, are being currently fought over.  Hoffe's two daughters are engaged in legal battles to stop the boxes being opened but no one knows what they contain.  Yesterday one of the boxes, in a bank vault in Zurich, was being examined by a scholar under the instruction of the court so we may still not know for some time what is on the inventory.  On the programme I suggested that it is unlikely that they will contain any major unpublished work, since Brod dedicated himself to promoting and massaging Kafka's reputation and would surely not have missed a chance to publish more of it.  Probably, they will contain Brod's own diaries and letters, though "drawings" have been mentioned in the press.  There is bound to be much of interest but we will have to wait.  Meanwhile both the Jewish National Library in Israel and the German Literary Archives in Marbach are fighting to acquire the eventual material.  As I suggested on the programme, Kafka's body is spread out on a table, all four limbs being tugged in different directions: born in Prague in the Austro-Hungarian Empire in 1883 and thus an Austrian, waking up in 1918 to find himself a citizen of the Czech Republic, a Jew, and a master of modern German prose.  According to the Israelis his archive belongs as of right to them, but the Germans surely have an equal right since language is always the defining issue when considering a writer, and what about the Czechs?

We will have to be patient.
Posted by Nicholas Murray at 08:10 6 comments:

Craig Raine and The Critics

It is a basic rule of this blog that I only talk about books I have read and so I can't say anything about Craig Raine's new novel, Heartbreak, because I haven't yet read it.  Like everyone else, however, I have read Terry Eagleton's hatchet-job in the London Review of Books, and it has reminded me – to compare great with small – of my own 2001 novel, A Short Book About Love which also provoked the comment that it was "not really a novel".  Raine is not shy of controversy of course and can look after himself.  I have to declare an interest in that his magazine Areté published two pieces by me (one very long, one very short) and in consequence I was invited to his lovely house in Oxford for the 10th birthday bash of the magazine where many famous literati pullulated.  Since both pieces were published not as a result of any currying of favour with this charmed literary élite whom we all love to hate (I didn't know any of them so there were no strings to pull) but by the simpler expedient of putting them in an envelope addressed "Dear Sir" I salute his openness to unsolicited material, always the mark of a good editor.  As former poetry editor of Faber and Faber and putative founder of the Martian school of poetry, and chum of Martin, Ian, Julian etc, Raine was bound to attract enemies but I can only say he was very nice to me.

The new book, which appears to be a series of episodic reflections and digressions on the subject of love (a fair description also of my book) raises the question of what is and is not a novel.  The epigraph to my book was taken from Dr Johnson, who defined the novel in his A Dictionary of the English Language as "A small tale, generally of love."  My definition would be "whatever you want it to be".  Aldous Huxley said there are no rules governing the novel except that it must be interesting and I agree.  What we want writers to be is inventive, original, entertaining.  If they don't have plots – or beginnings, middles, and ends – then so be it, as long as they are a pleasure to read.  In my last post about Isaac Bashevis Singer I said how much power there still is in realist fiction and I believe this.  But there is also scope for the sort of writing that takes liberties and gives pleasure in the process.  So let people break the rules and let the puritans be discomfited.

Now I will go and read Raine's book...
Posted by Nicholas Murray at 08:34 No comments: 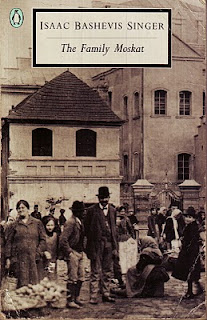 Isaac Bashevis Singer said that he preferred to write in Yiddish because it was a language that contained more vitamins.  Reading his great saga of early 20th Century Polish Jewish life, The Family Moskat (1950) whose translation by A.H.Gross he personally supervised, I can't judge the quality of the Yiddish but it is certainly a powerful and absorbing read and, unlike some family historical sagas, you never get confused about who is who, thanks to Singer's gift for rapid thumbnail sketches of people and scenes.  I hauled this substantial book around with me on a recent trip to the USA and it made me realise that the realistic novel, sometimes thought to have been usurped by modernist experiment and innovation, still has a lot of life left in it.  Singer builds up a vividly felt picture of a world that was doomed as much by the forces of modernity unleashed within it as the external threat without.  It runs from the start of the 20th century to the rise of Hitler and is saved from any kind of romantic nostalgia for a lost culture by the fierceness and candour of its realism but nonetheless I still find it profoundly moving to reflect that this Jewish world of pre-war Warsaw no longer exists.
Posted by Nicholas Murray at 14:30 1 comment: