No sooner do I deliver my twopennyworth on travel writing than Colin Thubron comes along and says it all so much better than I can do in The Guardian.  Before visiting Cyprus last December I read his 1970s book, Journey to Cyprus, and found it, like all his books, beautifully written, wise and observant.  Less flashy and self-advertising than some of the well-known travel writers, Thubron is an unfailingly interesting writer about place.
Posted by Nicholas Murray at 10:29 No comments: 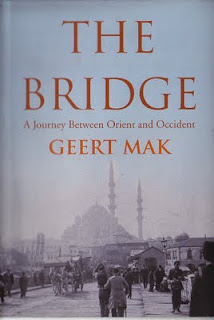 Is travel-writing dead?  That's the sort of question that is only marginally less sleep-inducing than: "Is the novel dead?"  Of course it isn't, but the old-fashioned travel narrative may well be so, and the sorts of travel book that work these days seem to be the ones that mix it – history, philosophising, autobiography, fiction etc etc.  Off to Istanbul shortly (volcanic ash permitting) I have just read the Dutch writer Geert Mak's splendid little book, The Bridge (2007) based on the daily life of the Galata Bridge over the Golden Horn in Istanbul.  It's about far more than the bridge itself which links the old part of Istanbul where I always stay, scruffy as it is, with the newer, westernised Pera ("outside") district.  The tussle in contemporary Turkey between modernisation and tradition which has been a feature of the country since at least the era of its modern founder Ataturk, is symbolised to some extent by the bridge.

What makes Mak's book so good is that he has talked to the shabby, poor, sometimes desperate street vendors and fishermen on the bridge as well as providing a brilliant pocket history of modern Turkey in general and Istanbul in particular.  These voices are what makes the book and he lets them speak in ways that some of the classic travel writers don't always manage to pull off.  It's a short book but an excellent one and makes me want to read his longer book about Europe, In Europe.  Everyone travels now, it is said, and so travel writing doesn't work any more, because we have all been there. It might be true that the old 'traveller's tales' are harder to get away with but there will always be a role for the writer who travels with eyes and ears open and some real historical knowledge.  Geert Mak is one of them.
Posted by Nicholas Murray at 13:25 1 comment:

What is Biography For? 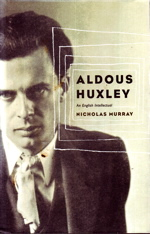 Once upon a time certain literary critics argued that biography was superfluous at best, pernicious at worst, because it encouraged us to concentrate on gossipy trivia instead of focussing on that sacred space: The Text.  Nothing dates quite so quickly as fashions in criticism and "the New Critics" are no longer new and the "doctrine of impersonality" is probably equally covered in dust in some lit. crit. mausoleum and many subsequent hot tickets are now being heavily discounted.  Quite what the current status of biography is in the austere world of criticism I am not sure but on Monday, if you happen to be in London, fellow biographer, Phil Baker, and I will be discussing "The Perils of Biography".  We both think that it has a future and a role but I still have a lot of respect for Proust's view in Contre Sainte-Beuve that, contrary to Sainte-Beuve (a critic who believed that you couldn't say anything useful about a writer unless you knew all about their life, preferably from personal acquaintance) the writer was far more than the bundle of atoms who sat down for breakfast.  The writer was, as Proust put it, "l'autre moi", the "other me", and his personal foibles had nothing to do with the writer who wrote those books.  A striking irony, of course, given the deep personal sources of Proust's writing. But I think we get his point.  Come along on Monday and see if we manage to refer to him.
Posted by Nicholas Murray at 09:18 1 comment: