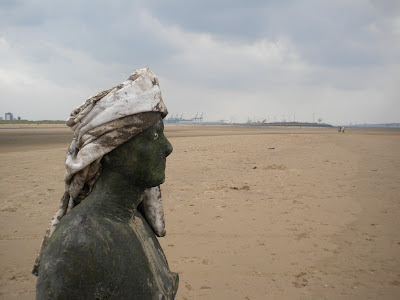 Anthony Gormley's installation at Crosby Beach, Liverpool, Another Place, known locally as The Iron Men was meant to be removed in 2006 but the locals protested and wanted it kept.  Ever since I first saw it I have been entranced by the way this human construct changed the whole natural landscape of this beach which was my childhood playground.  One of the poems in my recent collection Acapulco (Melos Press, see elsewhere on this page on how to order) called "Culture Capital" has a passage on the installation and the way in which people have added, as in this photograph, their own embellishments to the work.  The individual iron men (based I believe on a cast of Gormley's own body) are rusting and acquiring barnacles as well as impromptu headdresses so perhaps they won't last for ever but the idea was an inspiring one and I salute it.

PS to my friends who have not seen anything from me recently on Facebook or Twitter, an explanation.  I tried to throw myself into this world, I really did, but the tsnunami of trivia and narcissism finally swept my corpse out to sea and I am there no longer, except for Rack Press posts when necessary and sending links to Twitter for these blog posts.  I must say I feel a lot better without the daily dose of it.
Posted by Nicholas Murray at 10:39 3 comments: