In the Consumer Cathedral

You pass through the front entrance into a large, high-ceilinged space with worshippers at the side aisles busily making their devotions and a packed and reverent congregation filling the centre aisles.   Acolytes in their distinctive vestments move amongst the faithful, dispensing solace and wisdom.  I refer of course to that great cathedral of modern consumer culture, The Apple Store, in London's Regent Street.  For those of us who know nothing about the insides of computers, external appearances are all we have to go on, and five years ago I was seduced, as so many have been, by the sleek white lines of Apple.  Five years of constant hammering, with the letters wiped off some of the keys, and the white now a rather dirty shade of grey, my iBook finally gave up the ghost last week and so I put on my pilgrim's garb and headed for the basilica of St Apple the Martyr to buy a new MacBook.
The Apple Store is a vast space and what greets you when you enter it is a busy scene of activity dominated by three holy orders of "concierge" as they call themselves.  At the bottom of the hierarchy are the ones in orange sweatshirts bearing the legend: "Help is my middle name." These are your first port of call and, if they can't help, they guide you to the next level, in pale blue sweatshirts which read: "I could talk about this stuff for hours."  But beyond these are the highest form of life, the masters of the Apple universe, the Geniuses who stand importantly at The Genius Bar.  They wear dark blue sweatshirts which read: "Not all heroes wear capes", or, in one case, simply the single word: "Genius".  My genius had the awesome brain of one of Apple's advanced data processors, managing to conduct, simultaneously, the cases of about ten people, multi-tasking at a speed actually faster than any computer I have seen.
The word 'cool' is mandatory in every sentence and there is an atmosphere of the happy converted boosting each other.  It is all very Californian and funky and you can forget all that stuff about there being some sort of recession, this cathedral is packed with eager worshippers, queueing to spend more money and bearing off white bags, with that distinctive logo of the bitten apple, full of Apple product.
One fashion-tip before I leave you: a beanie is a great help if you are thinking of making a visit, and if it is chocolate-coloured, your passage through the Apple-rite will be as smooth as a hot knife passing through butter.
Have a nice day!
Posted by Nicholas Murray at 09:03 1 comment:

Martin Amis and His Friends 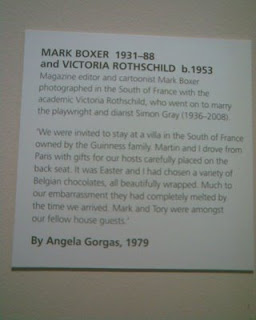 To the National Portrait Gallery for a small exhibition of photographs by Angela Gorgas called: "Martin Amis and His Friends." You think I am pulling your leg? A spoof? No, it's true. That is indeed the subject of the exhibition. Angela Gorgas, the photographer, was a friend of Amis in the 1970s and you have to say he takes a good shot. There are images of Martin with a fag, Martin with a fag...Martin in a cloud of cigarette smoke, Martin with a white mini which was known as "the ash-tray" because it was full of fag ends...And there is Christopher Hitchens ("the Hitch") of course, and James Fenton and Mark Boxer and lots of rich and clever people with nicknames like "Tory". There is a younger Ian McEwan, looking a bit scary actually, and overall it is interesting but would confirm the prejudices of anyone who had a certain view of the metropolitan literati. This little world revolved around, at that time, a left-wing magazine, The New Statesman, which lends an extra piquancy. I remember walking into their offices in around 1979 with my first little piece, about some Labour Party shenanigans in south London, and being received by the political editor, Patrick Wintour, in a cramped office where I was warned about the springs erupting from the torn upholstery. Our confab was interrupted by the arrival of the Hitch who , I must say, did a very passable imitation of Wildean languour. They must all have had such fun.
Posted by Nicholas Murray at 11:23 No comments: 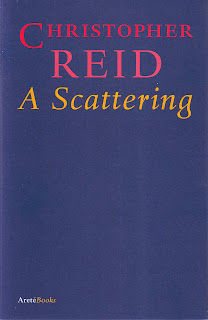 One of the finest and most moving collections of poetry this year may well turn out to be this new one from Christopher Reid, A Scattering, launched in Oxford last weekend and published by Areté Books. The book is a tribute to his wife, Lucinda, who died in October 2005 and it consists of four poetic sequences, the first written during her final illness, and the other three at intervals after her death. It is highly recommended.

The book can be ordered from Areté, postage free, for £9 from Areté, 8 New College Lane, Oxford OX1 3BN
Posted by Nicholas Murray at 10:55 No comments: 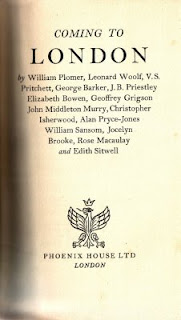 I have just finished a fascinating collection of reminiscences of writers' first arrival in London, published in 1957 and called Coming to London, edited by John Lehmann. It gives an insight into the early struggles of writers trying to establish themselves in the capital, mostly in the period between the two wars. Apart from the descriptions of eccentric characters and incidents, one thing is striking: the ambivalence towards London that so many writers felt. I wonder, if you assembled a similar group today, whether they would feel the same as, for example, Jocelyn Brooke, who wrote: "life in London tends progressively to inhibit the creative faculty, and is liable, unless one is more than usually tough, to prove finally stultifying." A place of opportunity, contacts, networking, but not, ultimately a place to write in.

This blog swings between two places: central London and the Welsh Marches and I can't quite decide, writing in both places, which is the more fructifying. As it happens, yesterday I was plunged into the heart of the literary world – except that it was in Oxford! Craig Raine's Areté magazine was celebrating its tenth birthday and all the contributors were invited (something that often doesn't happen, by the way, when publishers and magazines have a bash, sponsors, advertisers and hangers-on generally taking precedence over mere contributors and authors unless they are the starry ones). Craig is a fine host and his Oxford house was crammed with the literati, including the poet Christopher Reid whose collection A Scattering, beautifully moving elegies to his late wife, was being launched also at the party. My Belgian friend, Stan Lauryssens, star of the current issue of Areté with his piece on the monster Eichmann was there too. Stan was delighted to be shown an email from David Hare to Raine saying that this piece was the best thing in the magazine's whole 10 year history. All in all it was a good do but I suppose it has absolutely nothing to do with the quality of what anyone writes. On the other hand we all need to get out and enjoy ourselves from time to time.
PS Apologies to those who read an earlier version of this but I cut out some gossipy bits on reflection!
Posted by Nicholas Murray at 10:47 No comments: 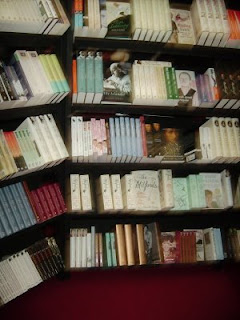 There's an interesting double-page spread in today's Independent books section by literary editor Boyd Tonkin about how the current recession will affect writing. He interviews several writers and publishers including Tom McCarthy who delivers a crisp judgement that the recession will "accelerate an already well-established pattern: mainstream publishers will concentrate on promoting non-fiction by television presenters and commercial fiction by creative-writing graduates (which should never have been confused with literature in the first place)." This fits with an earlier post of mine (see below, 23 December) predicting lean times ahead for serious writing. But these critics also see a positive side, a kind of shaking out of the commercial dross and a return by writers to their real roots as solitary innovators unhooked from market trends. Tonkin then asks if the net is the answer whereby future literary greats "can bypass the sluggish routine of print entirely". The trouble with this theory, he says, is that: "the critical jury on e-literature still has very little solid evidence to consider." McCarthy says something similar: "The internet has produced some excellent criticism and debate around literature, but I've yet to see any good "primary" writing on there.

This seems to me to be the challenge. The internet has the potential to become a free space of literary creation but so far most of what we get in the literary blogosphere is just more commentary (like this!). There are some online literary magazines but will there ever be (leaving aside all the issues about writers earning their crust) a situation where major new creative work is launched on readers for the first time in this way? Can it ever replace the primacy of print publication even by small press or limited editions? In spite of everything, do we even want it to?

I don't know the answers to those questions but clearly Something Needs to be Done if worthwhile writing is to survive.
Posted by Nicholas Murray at 10:11 5 comments:

My Books of the Year

Over at Readysteadybook.com a number of people, including myself, have offered their books of the year for 2008. You will have read Private Eye's annual exposés of the shameless puffing that goes on in these features in the posh papers. Over the years I have had four mentions of my books in such annual round-ups in the TLS, Observer and, I think, Independent and only one of those was by someone who did not know me: Lord Jenkins of Hillhead as he then was, Woy to the rest of us. But readysteadybook is wholly incorruptible and the choices always interesting.
Posted by Nicholas Murray at 15:13 No comments: