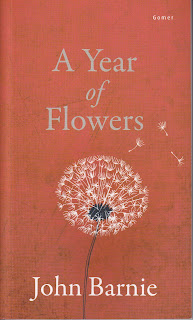 The tiny blue forget-me-not flowers that tentatively poked their heads above ground in my garden in Wales in late January were quickly obliterated by the recent weather and we wait for the genuine spring. Meanwhile I have been reading John Barnie's most recent collection of poems A Year of Flowers (Gomer Press) a beautiful volume that presents 44 wild flowers observed within walking distance of his home in Aberystwyth each with an accompanying poem.  The photographs were taken by John Barnie in 2010 and the poems provoked by each flower are, like the images, small beautiful and delicately defined.  It's a delectable little book and finely produced by Gomer.  I live in Powys, the neighbouring county to John in Mid Wales, and I was pleased to see (not ever having considered myself a botanist) that I could identify most of these flowers from my garden and the surrounding hedgerows and fields.  There were some I had never heard of such as Enchanter's Nightshade and some seaside flowers like Sea Holly and Sea Sandwort that I wouldn't expect to see in the Radnor Hills, but otherwise there they were in their glory: harebell and toadflax, stitchwort and violet...roll on Spring!

I won't quote any of the poems; instead you must buy a copy now!
Posted by Nicholas Murray at 08:09 No comments:

I am very pleased to have been elected as a Fellow of the Welsh Academy.  I am not sure I deserve to be in such distinguished company!
Posted by Nicholas Murray at 10:20 1 comment:

Edgelands: The Wilderness in the Back Yard 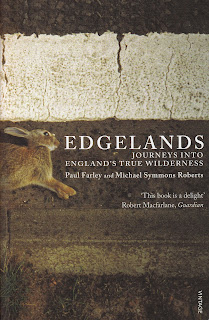 Having been brought up in the "edgelands" of north Liverpool, where post-war housing petered out in a raddled landscape of stagnant pools, black canals, and the tatty margin of Lancashire agricultural land, I could hardly fail to be interested in this absorbing book by poets Paul Farley and Michael Symmons Roberts, Edgelands: Journeys into England's True Wilderness (Vintage, £8.99).  Their title refers to these nondescript areas that are neither town nor country (the latter managed and curated and signposted).

These are where old industrial workings, canals, business parks, pylons, power stations occupy land that, in some instances, is more bio-diverse than the official rural spaces where people go to observe Nature.  Overlooked, largely undiscussed, these neglected and supposedly unlovely places are, especially to children whose play-spaces they have become, imaginatively rich and haunting and this was an excellent idea for a book.  The two poets, as might be expected, draw on some interesting poetic illustrations of their theme but the main focus is on direct observation and an acute commentary that works its way through all the types of edgeland landscape and its uses.  These boys have done their homework and when they fetch up on some tract of wild land you know that you are going to encounter an exact and copious inventory of the flora and fauna.  It's true that Google has made us all instantly omniscient but I was impressed and learned a great deal.  Buddleia, for example, the typical wild shrub of the edgelands, was actually named after an 18th century botanist, Alan Buddle.  That's why it's such a devil to spell correctly.

Early on in the book the authors have a tilt at the fashionable 'psychogeographers' like Ian Sinclair and Will Self (not mentioned by name) who use the edgelands as "a short cut to misanthropy" with their over-written and over-milked accounts (forgive me) of their urban wanderings.  There's also a bash at those who indulge in flâneurisms (something of which I am guilty) instead of getting on with the walking though, paradoxically, there's not much walking in this book, its authors, one feels getting out to many of their locations by car.  On the other hand the edgelands are more like standing pools than racing rivers so the verb to loiter or mooch (or stare through the chain-link fence of the scrap yard) is probably more appropriate than stride in this context.  Another intriguing paradox is that they attack the advocates of wilderness (i.e. 'real' rural wilderness) for seeming to want to dispense with humanity.  A good point, but the actual encounters and dialogues with individual people in this book are surprisingly rare.  It has more of the detached, analytical feel of a work of high anthropology and so we don't learn a lot about the joint authors, no messy anecdotes or too many direct reminiscences, though clearly they are drawing on personal knowledge (when describing dens and sheds for example).  The popular cultural references and the vocab is always ultra-cool and up to the minute and fogeyisms very rare – all of which of course may seem like a rather knowing tone to some readers – but the book's great strength is in the way it makes us see and think about the edgelands in a new and comprehensive manner.

To close with a typical observation of the authors.  Describing the new 'community forests' which have been planted as part of a strategy of 'regeneration' in some of the edgelands they point out how some interesting new eco-systems that were starting to establish themselves in this marginal wild have actually been destroyed "to make way for the new 'high quality environments'. It feels like a green version of what happened in our inner cities after the war, when communities were cleared and moved on to outlying housing developments.  Regeneration is such a seductive and powerful metaphor."  They are thinking for themselves, in other words, which ultimately makes this a very valuable exploration of the contemporary English landscape.
Posted by Nicholas Murray at 13:40 4 comments: