I have just put down Jeanette Winterson's latest novel in paperback, The Daylight Gate (Hammer) and putting it down proved very difficult during the reading of it as this always compulsive and lively writer has now taken possession of the horror genre by telling the story of the Pendle witch trials of 1612.

Winterson (like me) is a Lancastrian who believes that: "The north of England is untamed.  It can be subdued but it cannot be tamed. Lancashire is the wild part of the untamed." So where better to set a gripping story of wild goings on, of witchcraft, magic, the old religion, sex and violence.  From the opening sentence the story races away and draws on fantasy horror elements as well as real people and events such as the magician John Dee, Shakespeare, Alice Nutter and the witchfinder, Thomas Potts.  Winterson describes dungeons and witches with vivid relish but somehow avoids the pitfall of horror writing: extreme silliness.  This is largely because of the zest and vigour of the writing and hats off to Hammer for making the transition from old-fashioned British horror films to joining forces with Arrow Books (Random House) to produce what looks like being a series of horror-novellas by well-known writers.

I would not normally venture into this genre but I will follow Winterson anywhere and the journey was worth it.
Posted by Nicholas Murray at 10:16 No comments: 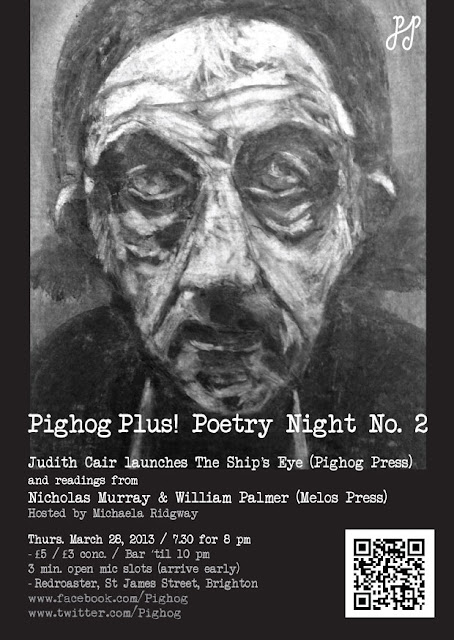 I am pleased to be reading under the Melos Press banner in Brighton this Thursday from my Acapulco: New and Selected Poems as part of the Pighog Plus! series of readings at the launch of Judith Cair's new book from Pighog.

Be there if you can!
Posted by Nicholas Murray at 10:40 No comments: