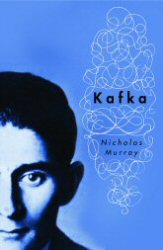 Tomorrow is the centenary of one of the more remarkable moments of 20th century literature when, through the night of 22/23 September 1912, Franz Kafka wrote his breakthrough story, Das Urteil, ("The Judgement").  He wrote it, as he said afterwards, "in einem Zug" or "in one go".  One translator is said apocryphally to have rendered this as Kafka having written it "on a train" (Zug being the same word for both).  It is wonderful to read, in Kafka's diaries, his description of the joy of this creation, how he was carried away by it, how he felt suddenly that "everything could be said" ("Wie alles gesagt werden kann").  Whatever else Kafka was, he was, for me, the supremely dedicated writer of his century, who was interested not in fame, "deals", "exposure", and all the other things that are urged on young writers as their goal, but the act of writing itself, its beauty and agony, its needfulness.  "The conviction verified," he wrote in the aftermath of the story, "that with my novel-writing I am in the shameful lowlands of writing.  Only in this way can writing be done, only with such coherence [Zusammenhang], with such a complete opening out of the body and the soul."

I won't say any more about the story itself but I suggest you join me in reading it in silent tribute tomorrow night.

Just now there is a little flurry of correspondence in the Times Literary Supplement following a review by Gabriel Josipovici of some recent books on Kafka in which Josipovici expressed some discontent (I oversimplify his argument) with critics who think they have finally captured Kafka's meaning.  I have some sympathy with him.  Kafka's greatness is partly due to the fact that we cannot neatly sum up what he was "saying".  The mystery, the never quite knowing, is what constitutes the peculiar appeal of his writing.  I have written a biography of Kafka and you can order it by clicking on the dreaded Amazon box to the right of this column but, in truth, biography can point to certain correspondences in the story with Kafka's life and can contextualise it usefully but it cannot explain its magic.  Reading it to his sister when it was still fresh she said that the house in the story was like theirs: "I said: How? In that case, then, Father would have to be living in the toilet."

Once again Kafka has the last word.
Posted by Nicholas Murray at 09:09 No comments:


I have just returned from northern Italy to find a review of my poetry collection Acapulco: New and Selected Poems (Melos) by Martina Evans on Writer's Hub and another by John Greening which I hope the TLS won't mind my reproducing here:-

"There is often a single poem early in a collection that helps the reader find their way. In Acapulco by Nicholas Murray, it is "Bedroom", about a painting by Vilhelm Hammershoi: "How you anticipate / our love of the minimal ...", it begins, concluding a few lines later: Your silence grows in us, expands like rising dough, until we reach the street and find ourselves, altered, in an exalted elsewhere. That heavy cadence is characteristic, as is the sound-shift from "altered" to "exalted". In Murray's strongest work the effect is exactly as described in "Bedroom". The silence can be that of "Honfleur" - "amongst smiling gourmands /who do not know our secret"; the more spiritual regions of "Icon", the opening poem; or raw and malevolent - most vividly in a piece about an owl ("That cold, accusing look!") accidentally smoked from its nest. "Owl" is Murray at full stretch. "Get Real!", his extended satire on the Coalition (as the biographer of Andrew Marvell, he can be forgiven for trying) is less successful than pieces where the mockery is reined in: his snaps of Liverpool ("Culture Capital" - Murray has also written a Life of Matthew Arnold), for example, or the gentle pokes at archaeology, photographers, cyclists ("chasing pleasure, with the grimness it deserves") and even writers in "Himself a Poet": Oh yes, we all know the truthfulness of blurbs: like the grocer's insistence that his gnarled loaf with its scatter of grains, signalling wholesomeness, was not drawn, craftily, from the freezer at dawn. Shakier in descriptive work such as "First Day of Summer", where "cooing pigeons" reappear from two pages earlier, Murray is at his best when least adjectival, when a poem feels like a "tossed titbit", one of those "buoyant scraps" fed to appease those same "pigeons in the square". He frequently emphasizes the importance of selection, knowing what and when to exclude - the minimalist title poem, for instance, is rounded off (again somewhat over-emphatically) with the idea of a "viewfinder getting in the way of the view", but also more sinisterly in "Der Führer", where Hitler "ordered that the blinds be drawn" when his train was passing bombed cities."

From the Times Literary Supplement, 14 September 2012
Posted by Nicholas Murray at 16:56 No comments: 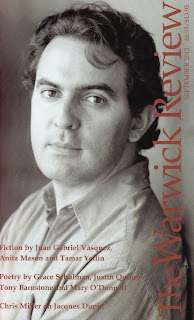 The latest issue of The Warwick Review has been published and contains the usual rich variety of poems, fiction, and reviews.

I was particularly pleased the have a review of my latest poetry collection, Acapulco (Melos) by Jackie Wills.  Here is what she said:

After referring to the poet's "taut precision" which "can spill into satire or deliver meticulous detail" she went on:

"Murray is an acclaimed biographer, novelist, runs Rack Press and is a Fellow of the Welsh Academy. This collection contains 25 new poems and selected work from two previous collections, Plausible Fictions and The Narrators Murray's range is eclectic and within the new poems, unsurprisingly, his political voice is present. He tackles pollution with stark imagery in 'Food', homophobia in 'Courage', and racist violence in 'Culture Capital'. Later in the collection, his furious satire 'Get Real' takes on contemporary politics in the fine tradition of poets as diverse as Alexander
Pope, Linton Kwesi Johnson and the late Peter Reading. Murray's tight style, at its best in the first verse from 'Food', serves his politics well:

On Midway Atoll they spread out the infant albatross:
its stomach slit to show the bellyful of plastic trash
that parents plucked from the polluted sea as food.

In the older sequence 'Greek Islands', Murray’s brevity delivers a sense of transience, of visual pleasure, of moments attached to places like tiny threads or found objects. These poems are as beautiful and challenging as the newer poem 'Island Swimmer', in which the subject, an older woman, easily outpaces the narrator, her body emulating "the action of the eel".  At times, among the many subjects this collection tackles, there is a sense of the fragility of relationships, and, while Murray's a careful writer, occasionally his language leans towards the archaic. But the wry title poem, ‘Acapulco’, is another that shows him on form, condensing the image – "the tower blocks gather to the contemplation of blue” – and setting pelican against tourist.

Subscribe now to The Warwick Review by emailing: m.w.hulse@warwick.ac.uk.

Posted by Nicholas Murray at 08:59 No comments: