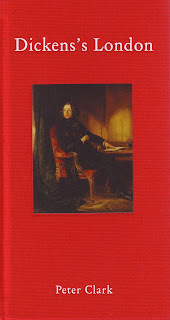 Numberless books about aspects of Dickens's London have been written but here is one that actually has a practical utility in that it enables you to pace the streets today and see exactly which locations the author had in mind when he positioned his fictional characters in those districts of London he knew so well.  Written by Peter Clark and published by Haus in its "Armchair Traveller" series, Dickens's London, (£9.99, hardback) is based around five central London walks and, based on a road-test of the sections in Bloomsbury that I am familiar with from my own recent book, Real Bloomsbury (Seren, 2011), I'd say it is accurate and full of relevant detail and a great excuse to go walking in central London with a theme to follow.  It's an attractive, pocket-sized hardback, and probably one of the more useful and substantial of the Bicentenary missiles that will shortly be raining down on us.
Posted by Nicholas Murray at 16:02 1 comment: 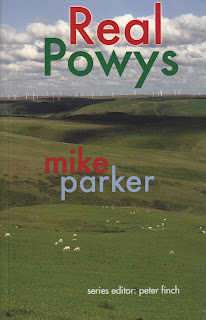 I must begin by declaring an interest.  Mike Parker's Real Powys, the latest in the Real series of offbeat guides to (mostly) Welsh cities edited by Peter Finch, is in a series to which I myself contributed a volume earlier this year (Real Bloomsbury).  So successful have these books from Welsh literary publisher Seren been that the series has decided to invade England and a few titles like mine have started to appear, or are planned to appear, for other cities like Liverpool and Oxford.  The innovation of Real Powys is that it is about a rural county and in his introduction Peter Finch admits that he had doubts about the workability of the 'psychogeography' (I don't like this fashionable word) that is generally associated with urban writing and the lowdown on cities.  He needn't have had worries because Mike Parker shows that the idea of writing about place with an alertness to what is going on and what has been going on works just as well in the country as it does in the city.  And even rural places have their towns, pubs, streets, and built oddities and quirks.

Powys, which the Welsh poet Harri Webb, aptly called "the green desert" covers a quarter of the landmass of Wales but sheep outnumber humans by 60 to 1 and its population, such as it is, is 99 per cent white.  Bordering England along its eastern side it has had an often vicious history of conflict with its neighbour that, as Mike Parker rightly argues, still lingers in the quiet, clean air of these windy hills.

For the past quarter century I have lived in eastern Powys, in the old county of Radnorshire, dividing my time for the past ten of those years between it and London (hence that Real Bloomsbury) so I read the new book with great interest, especially on my patch of East Radnor.  (Yes, madam, I agree you haven't the faintest idea where any of these places are but that is the charm of Powys.)  I am pleased to report that Mike Parker has got it right.  This isn't Pevsner or Wikipedia.  It isn't an exhaustive checklist of everything.  It is a personal account, like all the Real books, where Penybont trotting races take up more space than architectural jottings, but you will learn a lot from it along the way.  It's true I would have liked more about Knighton, the town on the Dyke (Offa's), or a mention of the extraordinarily innovative Presteigne music festival which manages to win audiences for more original commissions of new work in classical music than the Proms would dare put on (the Proms controller frankly admitted to the larger than life director of the Presteigne festival, George Vass that he wouldn't get away with any of this at the Albert Hall), or a gesture at places like Cascob or Old Radnor.  But what he does say rings true and this is a lively and interesting book.

Powys invites gentle satire.  We all think of ourselves as 21st Century urban sophisticates and quaint customs and unchanged surfaces are easy to smile at.  Mike Parker, by dubbing this "smallest, poorest county in the land" Ruritania once or twice, might seem to go along with that trend but he is not mocking and he has a good knowledge of the patch and its history.  Highly recommended if you are venturing out into the kind of country where grass grows in the middle of the road and (indigenous) people in small market towns sometimes greet strangers in the street as if they were old acquaintances, something that would never happen in Bloomsbury.

Real Powys by Mike Parker is published by Seren at £9.99
Posted by Nicholas Murray at 08:33 1 comment: