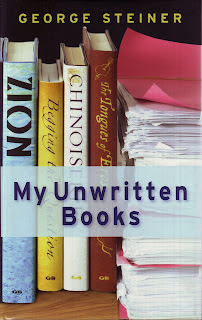 A new book from George Steiner promises many things: intellectual stimulation (or intimidation - is there anything this man hasn't read?), insight, incidental laughter at his occasionally hyper-polysyllabic performances, hamperloads of food for thought. But there is also the penitential streak as we submit ourselves to the withering critique of English philistinism and lack of intellectual ambition that Steiner has been directing at us for many years. His latest book, My Unwritten Books (my own multi-volume part-work would be called My Unpublished Books or The Books the B*****s Wouldn't Publish) is a series of seven essays each dealing with a subject that he has for some reason or other failed to write a book about. It's a fascinating read and, contrary to what some reviewers have suggested, it isn't full of false modesty and abject humblings that sound like boasts. If Steiner sometimes lets us know that he's astoundingly well-read and philosophically literate, well, it's true isn't it? It's hard to decide which of the seven books I'd most like to have seen realised but I would in the end probably plump for "The Tongues of Eros" about sex and language (the dependence of the one on the other and the variations, in both departments, between different language speakers) even though some of the candour about Gorgeous George's erotic manoeuvres was more than explicit enough for me. What I found quite striking, however, in Steiner's essay on contemporary education, was a new note of something like acceptance of what he once would have scourged. For example, though he coins the nice phrase "cultural masochism" for the recent British frenzy of dumbing-down, he actually says (p130 if you don't believe me) that British anti-intellectualism may actually be "therapeutic" in some sense. He even suggests that there should be "a subdued celebration of" the British way. Is George Steiner going soft? There is also a slight blandness in the chapter on "Zion" where he implies that all criticism of Israel (he himself wouldn't dream of living there he clearly states) is either brute anti-Semitism or "Jewish self-hatred". I'm afraid it isn't quite as simple as that. But in a final chapter about his politics and beliefs - or rather his lifelong reluctance to nail his colours to the mast - he makes a fine attack on the cultural and intellectual damage done by the current worship of money (today, the papers tell us, Gordon Brown triumphs again with his "Mac A Level" wheeze) as the summum bonum of contemporary life: "The censorship which profit imposes on the media is as destructive, perhaps more so, as that of political despotism." Good on yer, G. 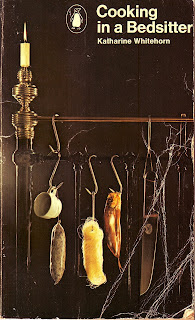 The life of a long-distance commuter is a form, I sometimes think, of madness. For twenty years I have lived on the side of a Welsh hill surrounded by sheep and tooting owls but for the past seven of these I have been shuttling to London during the week to research my books in the British Library and to live in what used to be called, before estate agents came up with the chic-sounding "studio", a bedsitter. Naturally I would never think of upsetting animal lovers by swinging a cat but even swinging a mouse would be difficult in my tiny Bloomsbury pied à terre. One of its consolations is a bookcase in the foyer of this 1930s (estate agents: art deco) block where we swap books. Today I turned up this 1961 classic by Katharine Whitehorn and it turns out to be productive of what Cilla Black called "a lorra laughs". It is a delightful period piece and I might try some of the recipes but my eye was caught by the section: "Cooking to Impress". There is a sub-section "Cooking for a Girl" which is a hoot. The male would-be chef is told that he can "get away with more roughness than a girl can" (I assume in the kitchen rather than the bedroom though these two are often the same thing in a bedsitter, fortunately not in mine). He is advised to add "something of purely feminine appeal like sticky chocolates or her own special brand of Turkish cigarettes". Yes, I told you, this was written in 1961. There is more advice where this came from: "Do not, at any time, invite a girl to dinner, and when she arrives in a pretty frock, looking forward to a drink and a little cosseting, present her with several odd-looking tins, packets, and lumps and expect her to do the cooking."

I shall report further if my attempts to cook something from the book for Mrs Bibliophilic Blogger have productive results...
Posted by Nicholas Murray at 16:04 1 comment: 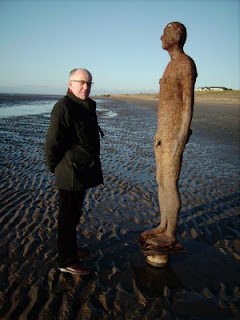 AN APOLOGY FROM THE MANAGEMENT:

Friends have pointed out that there has been a sudden outcrop of gentlemen without trousers on this blog (see left and right). The explanation is that they are Artistic (respectively sculptors Jacob Epstein and Anthony Gormley) and it's just a co-incidence. At least I am not incurring legitimate feminist wrath by decking this blog out with girlie pictures! Have a nice day and, just to reassure you, George Steiner is coming next....

My book about my native city, So Spirited a Town: Visions and Versions of Liverpool is finally published next week after being delayed by production problems. It's a book about all the writers across the centuries who have written about Liverpool - currently European Capital of Culture for 2008 - wrapped round with some memories of my own 1960s childhood.

Here I am on Crosby beach examining one of the figures in the wonderful installation by Anthony Gormley called Another Place. It's the beach where I played as a boy and it's considerably cleaner than it was then. This picture was taken on Christmas morning where, instead of rubbish and oil slicks and sewage, bright cockle shells and razor shells glittered in the sun on clean sand. Amazing!
Posted by Nicholas Murray at 07:38 3 comments:

As the current debate about the Arts Council's support - or rather withdrawal of support - from literature rages, we will hear a great deal about the need for the arts to be "accessible" to "ordinary people". I have always found this phrase rather patronising because it is generally used by people who are looking down their noses at us at the same time as they profess to be our friends. Actually they take rather a dim view of us and don't think we should be setting our sights too high. This is the essence of populism. So it was refreshing to come across a nice thought from Ford Madox Ford in his Memories and Impressions: "I always want to write about ordinary people. But it seems to be almost impossible to decide who are ordinary people - and then to meet them. All men's lives and characteristics are so singular." Exactly. May we all remain "singular".
Posted by Nicholas Murray at 12:31 1 comment:

What's this? London's trendy Time Out announces the arrival of Welsh poets in town. Rack Press (see its blog) is launching the latest batch of three poetry pamphlets and celebrating what it calls "The First Ten" at a festive event at the Swedenborg Hall in Bloomsbury on Tuesday 15th January. Admission is free, the poetry is good (two Welsh and one Irish poets - all excellent), and this annual event in Bloomsbury is turning into a regular fixture on the capital's literary calendar. Rack Press, based in the beautiful countryside of the Welsh Marches, will be holding further launches and readings in Wales, including at the Dylan Thomas Centre at Swansea on 11 April but be the first to catch these limited edition finely produced pamphlets and meet and hear their authors read next week if you are in London. Byron Beynon, Steve Griffiths and David Wheatley will make your night.
Posted by Nicholas Murray at 22:44 1 comment: 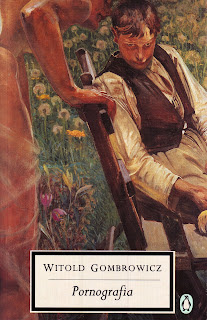 Milan Kundera's brilliant 2005 "essay in seven parts" on the novel Le Rideau (The Curtain) has a passage in which the Czech novelist (who these days writes in French) introduces what he calls "la pléiade des grands romanciers de l'Europe centrale". These four central European twentieth century writers - Kafka, Musil, Broch, and Gombrowicz - did not, he argued, form a movement or school. In fact, it was remarkable that four writers who never spoke to each other should have evolved such a similar aesthetic. Which was? According to Kundera they were "poets of the novel" who were: "fired by the form and by its novelty; attentive to the intensity of each word, of each sentence; seduced by the imagination's potential to cross the boundaries of "realism"; but at the same time proof against all the seductions of the lyrical: hostile to the idea of turning the novel into a form of personal confession; allergic to all forms of ornamentation in their prose; entirely concentrated on the real world. They all conceived of the novel as "a great anti-lyrical poetry/une grande poésie anti-lyrique".

Now there's enough there to argue about for several weeks but what struck me about his Pléiade when I encountered it in 2005 was that I had, shamefully, barely heard of the fourth name, the Polish writer Witold Gombrowicz (1904-1969). I immediately read his extraordinarily original first novel, Ferdydurke and have recently been catching up with the rest. The excellent Dalkey Archive have just re-issued his autobiographical A Kind of Testament (originally 1968; translated by Alastair Hamilton). Hamilton is also the translator of his 1966 novel, Pornografia, a fascinating story of psychological manipulation that, as its title hints, goes right to the edge of what could have become questionable, as two older men engage in a complex psychological choreography with a young, half-innocent, half-knowing, couple against a background of occupied Poland in 1943. Gombrowicz's skill is to put traditional elements of fictional narrative to work in the service of a highly intelligent, innovative novelistic gift. I am still trying to absorb and comprehend his ideas about Form and the notion of "immaturity" but the journey is proving exhilarating.
Posted by Nicholas Murray at 08:15 4 comments: