Well, it's not a very good one but here goes. A couple of years ago I was at a benefit for P.E.N at the Gate theatre, Notting Hill, where a Pinter double bill [A Kind of Alaska and A Slight Ache] was on. At the interval a surge of literati flowed into the tiny bar of the Gate and I found myself thrown against the playwright in a tight corner. Saying something seemed unavoidable but what? I suddenly recalled the opening of the British Library in the mid-1990s, an event (for reasons too long and boring to go into) to which I had been invited. On that day a crowd of writers and scholars, at a given signal, flowed into the virginal Humanities One Reading Room and the Library was declared open. Listening to the boring speeches, I exchanged a brief nod with the man (HP) standing next to me who seemed to share my ennui. So on that night in the Gate my mouth opened and out came the inane words: "Do you remember that day the British Library opened?" Famous for his fierce strategic rudeness to bores and people who irritated him I waited for some put down. Instead, with a broad, gnomic smile he declared in a wonderfully sage-like voice: "I remember many things."
Posted by Nicholas Murray at 10:16 2 comments:

The Literary Crunch: the prospect f0r 2009 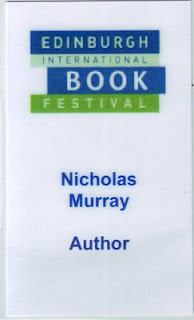 Another year ends and the prospects for what I generally call "serious writing" – which amounts to books actually written by the people whose names are on the spine with some impulse of imagination or truth behind them – seem as bleak as ever. One would like to be jolly and optimistic and Positive but the evidence simply smacks you in the face. The bookshops really say it more eloquently than I can: shelves filled with celebrity memoirs and cookery books often ghosted by someone else, a handful of 'literary novelists' allowed at the feast, and the products of marketingthink everywhere to be seen in the form of books cloned to look and feel like previously high-selling books and the really interesting and original ones hiding somewhere out of sight. As a member of the Society of Authors I undergo a regular mediaeval penance of self-flagellation called reading The Author which merely catalogues the decline of serious publishing and in particular the so-called "midlist" of not-quite-best-selling but decent books where most authors live and where the axe is increasingly going to fall. I would like, as I said, to offer a happy seasonal thought but it is impossible. In fact my Christmas Message is: things are far worse and far more alarming than anyone dares to say. This thing I was given to hang around my neck at the Edinburgh Festival in the summer should perhaps have been a necklace of thorns. Cheers!
Posted by Nicholas Murray at 08:25 No comments: 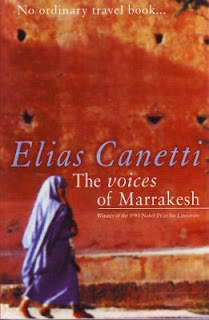 A year or so ago when I was doing some writing tutoring at London University under the Royal Literary Fund scheme I was pulled up sharply by a postgraduate student in the middle of a riff of praise for DH Lawrence as a travel writer. She made clear that she thought the kind of thing I was praising (that marvellous passage in one of his Italian books where he becomes aware of an old woman sharing the terrace in front of the church with him above the lake and the abandoned lemon groves and starts to imagine what she might be thinking) was a kind of offensive or neo-colonial invasion of the victimised Other. Vainly, I tried to argue that humane empathy is what makes us different from the fascists but this is the sort of argument one is always destined to lose. The self-righteous always triumph. And I gave up.

I was reminded of this on a recent trip to Morocco before which I actually managed to do what I often fail to do: viz. read a few relevant travel books in advance. Elias Canetti's brief but brilliant The Voices of Marrakech, Peter Mayne's The Alleys of Marrakech [now trading under the title of A Year in Marrakech], Edith Wharton's In Morocco, and, best of the bunch, Paul Bowles's Their Heads Were Green all helped me understand the place and its people better. Of course the 'traveller's tale' with its British variant the funny-foreigner narrative can often distort and misrepresent but these four writers, it seemed to me, had both knowledge and empathy and a real desire to understand what they saw. Obviously they generalise and make judgements about another people but the same thing happens in the opposite direction. It's called being human and I can't help feeling that when it stops and the world judders to a halt under the weight of homogenizing cultural globalisation I shall stop travelling and retreat to a hermit's cell in the desert. In the meantime real, as opposed to silly and gimmicky, travel books will always be worth doing.
Posted by Nicholas Murray at 17:20 1 comment:

Yes, thank you, Marrakech was fine (and I may come back to that) but my post-holiday mail included a request from the Poetry Society, of which I am a member, to express a view about a successor to Andrew Motion as Poet Laureate, a blanket request to all members. I think I will be proposing Private Eye's E.J.Thribb whose evocative minimalism has always entertained me. But, before we forget about Andrew, I recall that in September 1999 I made the following observation in my book on Andrew Marvell: "Marvell saw the function of the artist at a time of revolutionary change as being...a witness to the true inner nature of the conflict...Two centuries later another English poet, Matthew Arnold, would argue that a society in the process of rapid change needed at least a few voices prepared to step back from the immediate call to "lend a hand at uprooting certain definite evils". Nicholas Murray: World Enough and Time: The Life of Andrew Marvell (September, 1999), p38

A few months later in The Guardian Andrew Motion made the following observation:

"Living through a time of revolutionary change, Marvell does not respond as a propagandist for one side or the other, but as someone bearing witness to interior realities...Matthew Arnold...also reminds us of Marvellian virtues when he tells us that during periods of turbulence and rapid change, artists should avoid the temptation to "lend a hand at uprooting certain definite evils". Andrew Motion, The Guardian, 11 March 2000.

Now I know there will be crude, unsophisticated minds who will call this plagiarism but I prefer to see it as a tribute and I am honoured.

And, of course, the new Laureate - seriously - should be female.
Posted by Nicholas Murray at 18:56 8 comments: