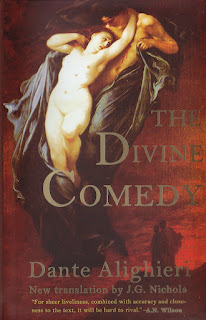 A new translation of Dante's Divine Comedy is launched this evening at the Italian Cultural Institute in London.  It is by J.G. Nicholls and having read his version of the Inferno when it was first published by the ever-reliable and enterprising Hesperus press I have no doubt that the new hardback compilation of his translations of the whole of Dante's epic will be an excellent one.

The book is published at £25 by Alma Classics with illustrations by Gustave Doré and is very attractive to handle but of course what matters is the translation and here Nicholls hasn't ducked the challenge of using verse to render Dante's famous line.  It works, in my view, because the verse flows naturally, doesn't try too hard to draw attention to itself and avoids the archaic and the 'poetic' to produce a highly readable and fluid read yet retaining the dignity of tone of the original:

Where, on a sudden, there before my eyes
Stood three infernal Furies stained with blood.
They looked like women and had women's ways,
With bright green hydras twisted round the waist,
With thin serpents and two-horned snakes for hair,
Bound round their savage heads and interlaced.


Matthew Arnold, in his famous lectures on translating Homer, berated some of his contemporaries for their over-ingenious attempts to render Homer as an Anglo-Saxon or whatever.  The key thing, he said, was to 'reproduce the effect' of the original.  I feel that this translation succeeds in that vital aim.