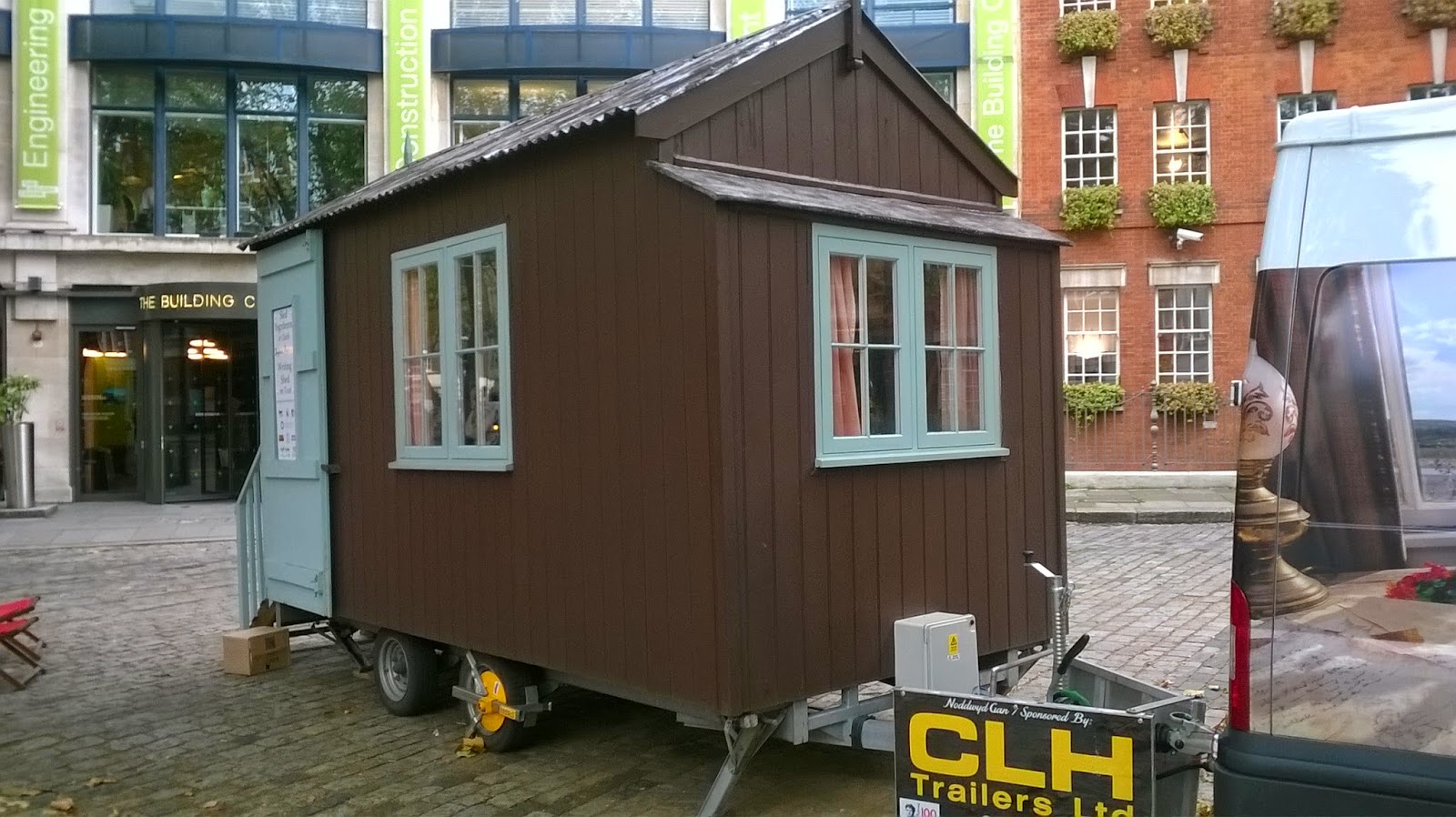 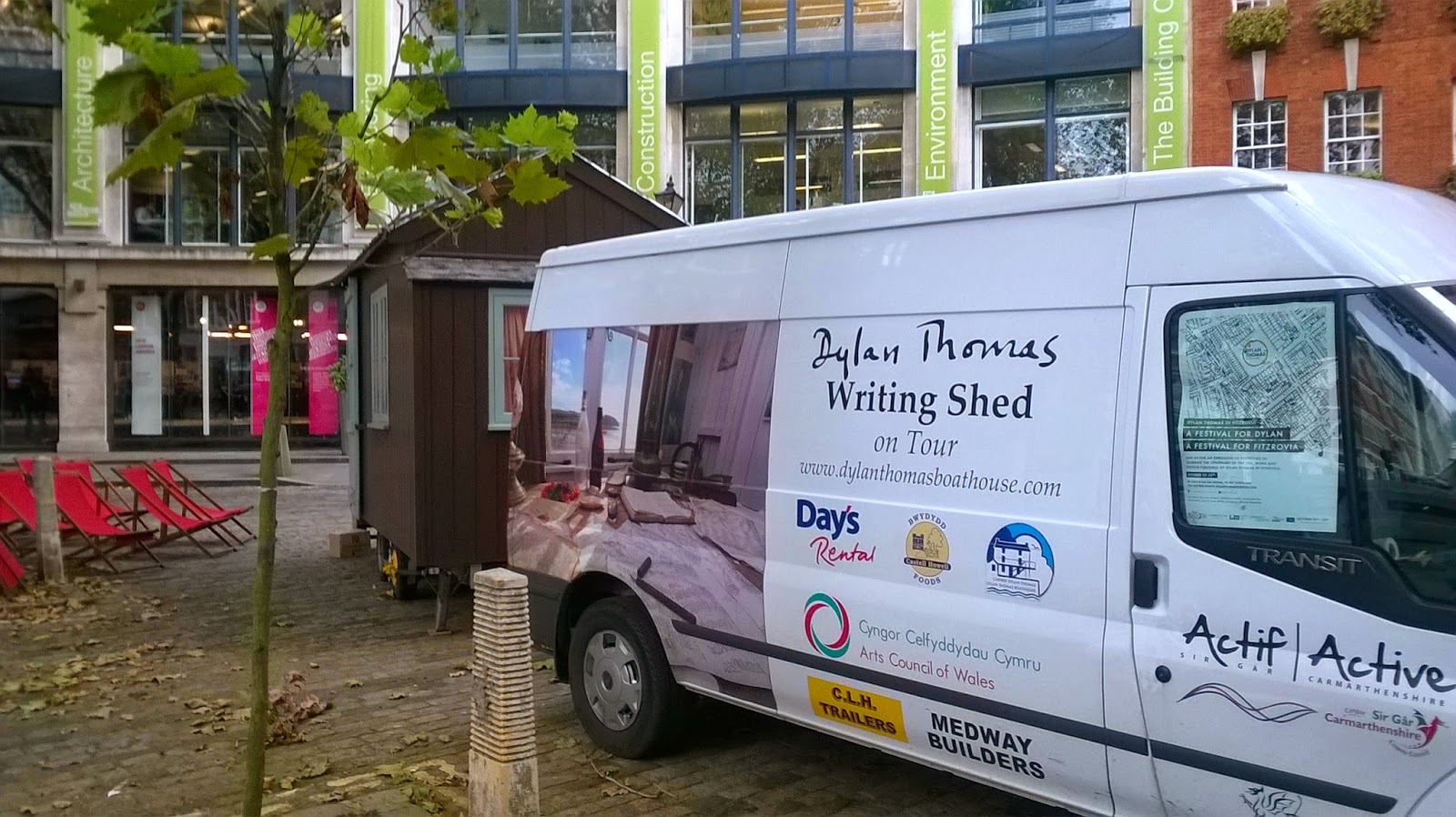 Strolling through Bloomsbury today what should I see, parked in a piece of open space on the very cusp of Fitzrovia, but Dylan Thomas's writing shed.  Except that, er, it wasn't.  It was a faithful reproduction that is being towed around these islands, having started out of course in Wales where I should have caught up with it before.  It is being called The Pop-up Writing Shed and inside (I learned when I read the handout after I had left the scene) visitors were being asked, "in honour of Dylan Thomas' love of words" to help to compile a dictionary of fresh new words.  "Be playful," the Shed's curators say, "be rhythmic, be onomatopoeic, be brave".  Had I noticed this option I think I would have posted to the projected Dictionary of Dylan the word "shamshed".  Instead I pottered amongst the reproductions of letters, photographs, and what may have been actual books from his boathouse.


It was very popular and it was soon difficult to turn round in the small space for fear of treading on eager poetry, or at any rate, Dylan lovers.  One woman expressed astonishment at the sight of his neat, legible handwriting on a letter spread out on the table.  "That's amazing, I didn't think he would write so clearly if he was drunk all the time."  I scanned her face for signs of irony but no, this is what she genuinely believed.  "Perhaps he had an old-fashioned Welsh education, taught how to write in pen and ink," I offered primly.  This earned me an old-fashioned look.  It's true that I may not have been careful enough in my perusal of the shamshed, but I couldn't see any poetic manuscripts about. But in a sense that's not the point.  DT is the point.  He is, as Cliff Richard said of Elvis "a phenomena".  He is popular, unlike most poets, so let's not carp.  And if you are in Fitzrovia this weekend there's a special "Dylan Thomas in Fitzrovia" festival which should be a lot of fun.  But get to the shamshed early before it's crowded out.
Posted by Nicholas Murray at 14:10 No comments: 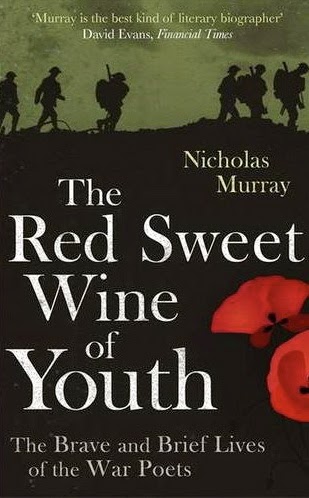 I am looking forward to taking part with some other writers and anthologists in an event on the First World War at the Working Men's College in Camden organised by Lucy Popescu on Thursday 6 November.  I won't actually be talking about my book on the war poets (illustrated here) but will be reading Trench Feet my verse satire on an academic who decides to turn the clichés of the Great War into a TV career opportunity and comes badly unstuck.  I am also talking, but this time about the more serious book, at the Special Forces club on Monday 10th November and I have a forthcoming review in the Times Literary Supplement on some recent books of war poetry.
Posted by Nicholas Murray at 14:57 No comments:

I hugely enjoyed giving a talk last Friday (10 October) at the Cheltenham Festival of Literature on Aldous Huxley's Brave New World.  I was arguing that his 1932 novel is still highly relevant to current political and cultural debates, but I also was looking at its specific historical moment, at where it came from, at what made Huxley write it.  It was an excellent Cheltenham audience with some very interesting an intelligent questions.

Posted by Nicholas Murray at 07:38 No comments: