Romantic Moderns and the Hedgehog 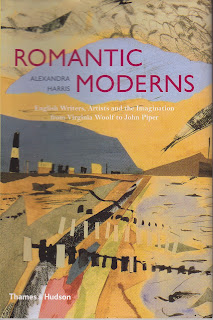 Heaven forbid that I should start applying to the random ephemerality of blogging the portentous tools of literary criticism but I have a vague feeling that if I were to embark on a bit of auto-criticism over the past year I would see one theme emerging: the persistent claims of realism as opposed to a view of literature that would banish all that naturalistic stuff and replace it with the austere formalism of the modernist classics.  Now I am as passionately fond of a spare Beckettian dialogue or passage of prose as the next person but I also like the kind of writing that gives me the smell and feel of things – and that doesn't have to mean plodding and conventional novelistic realism of the kind modern fictional innovators have been in revolt against.

As it happens I have just finished reading Alexandra Harris's Romantic Moderns: English Writers, Artists and the Imagination from Virginia Woolf to John Piper (Thames and Hudson, 2010), a much-praised book that deals with the art and literature of the 1930s and argues that there was a native tradition, embodied in artists like John Piper, that reconciled modernism and the specificity of English landscape and architecture and writing.  I began this book with some resistance because the merest hint of Little Englandism usually sends me into hysterics, but Harris is anything but a polemical writer and her gentle argument merely suggests that, even at the height of the enthusiasm for inter-war modernism (embodied, for example, in the Isokon flats in Hampstead) there was an intense interest in the particular English tradition, with Piper, for example, touring the country to photograph 12th century church fonts.  She cites Piper's wartime book British Romantic Artists (1942) in a series called "Britain in Pictures" published to celebrate, presumably, what we were fighting to defend.  Intrigued by this very new (to me) use of the word "Romantic", I sought out the book and read its opening sentence: "Romantic art deals with the particular. The particularisation of Bewick about a bird's wing, of Turner about a waterfall or a hill town, or of Rossetti about Elizabeth Siddal, is the result of a vision that can see in these things something that for a moment seems to contain the whole world; and, when the moment is past, carries over some comment on life or experience besides the comment on appearances." Underlying Harris's argument is the suggestion that modernist abstraction simply missed out too many of these "things" and that the contemporary art theorists like Roger Fry, who argued that art was sullied in its purity of focus by irrelevant external details and that "significant form" was the goal, were in effect aesthetic puritans.  Although she presents convincing evidence that contemporary cutting-edge artists shared this growing reservation about pure formalism, my resistance took some calming down.  First of all, I never accept, in literature or art, what I call the football supporter's imperative, that one has to wear a red and blue or a black and white scarf.  Abstraction works and so does realism.  I can happily move from Bacon to Hodgkin, Freud to Riley.  Secondly, the argument that international modernism was somehow rootless, cosmopolitan, not drawing sustenance from a particular cultural tradition, is simply unsustainable.  The Andalusian Picasso is a sufficient example.  In fairness to Harris, she doesn't ever put it as crudely as this and, generally, she opens more doors than she shuts.  Like all the best critical works it sends you away with a reading list scribbled on the back of the bookmark and my first port of call was Gilbert White's The Natural History of Selborne (1789) which became a popular text (my edition, with drawings, see below, by Edmund New, is dated 1937) in the rediscovery of interest in "England" and its rural life in the mid-1930s. 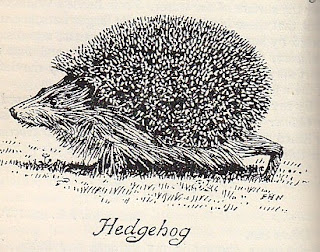 This is one of those books I have possessed for a decade and never actually got round to reading and it is a delight.  Written with a beautiful clarity of observation it describes the topography and animate and inanimate life of the parish of Selborne in Hampshire.  There's a passage early on about the "raven-tree" near the village where a "large excrescence" bulges out in the middle of the stem of the oak and ravens nest above it unmolested by the village boys who try, unsuccessfully, to dislodge their nest.  Then the tree is eventually cut down and the raven, sitting on her eggs, comes down with it "dead to the ground".  It's one of countless passages that derive their force from the intensity of White's observation.  Read it and you'll see what I mean.  Literature and the imagination need that fuel, that particularity, that vivid detail, every bit as much as they need "significant form".
Posted by Nicholas Murray at 11:21 2 comments: