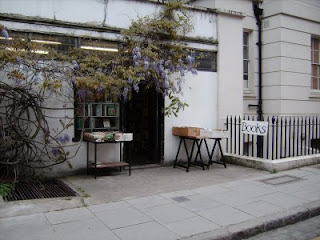 Continuing my occasional series about the vanishing species of second hand bookshops, this is the Marchmont Bookshop at 39 Burton Street London WC1 (0207 387 7989.) It's the nearest to the British Library (if you discount the remainder shops) and is tucked away behind Cartwright Gardens.  Those trays you can see outside often turn up literary gems.  Just now I was tempted by the first Penguin edition of William Golding's Pincher Martin at £2.50 until I remembered I already had a copy.  Inside, the emphasis is mostly literary with a remarkable selection of 20th century poetry.  This shop seemed to go very quiet a couple of years ago and I thought it was defunct but it is now trading regularly again and well worth a poke about.  And it has the best wisteria of any bookshop in town.
Posted by Nicholas Murray at 13:15 No comments:

It may not have much visibility in the literary blogosphere but Wales palpably exists and today the longlist for the Wales Book of the Year is announced.  Ten books in English and the same in Welsh were announced and a record five in the English language section are volumes of poetry. I have to admit that I have so far read only one of them, Matthew Francis's fine poetry sequence Mandeville about the fourteenth century traveller but the list looks interesting and substantial. It will be whittled down to a short list of three titles in each language, to be announced at a special event at the Hay Festival on 25th May (these guys certainly know how to delay a climax) and then the final Wales Book of the Year winner will be announced in a glitzy ceremony at a swanky Cardiff hotel on 15th June.
As a past judge of the Book of the Year I know that this award has a solid track record and the judging takes place in a hype-free atmosphere so it's worth looking out for the winner.  That said, there has been a debate in Wales, in which I have taken part, about the need for literary prizes and about the impact they have on serious writing.  Not to mention the edgy boosterism involved in the increasingly high profile of these awards ceremonies.  I have always liked the Prix Goncourt, one of France's most prestigious prizes, which is simply announced discreetly without any black tie and flashbulb.
When I was a judge a few years ago, I was sitting on the stage at Hay with Welsh First Minister, Rhodri Morgan (who was actually presenting the prizes) just about to say a few words on behalf of the judges.  In those days the event was there to announce the winner rather than just the shortlist. Rhodri leaned across to me and asked in a confidential whisper: "Is there an envelope?"  There wasn't on the day, though there is a cash prize for the winners.
One minor cavil.  One of the shortlisted poets, Samantha Wynne Rhydderch, has her book described as a "debut collection for Picador". Actually she is an established young Welsh poet with at least one if not two earlier collections behind her so this is not a "debut".  This smacks of what the Australians call the "cultural cringe", seeking metropolitan approval by treating publication by a fashionable London imprint as some kind of initiation.  Wales has its own vibrant publishing and writing scene and doesn't need that sort of curtsey to the metropolitan establishment.
Posted by Nicholas Murray at 08:27 No comments:

Beckett: Interim Thoughts on the Letters

One of the unexpected pleasures of 2009 has been the appearance of the first volume of Samuel Beckett's letters covering the period 1929-1940 when he was at work on what became More Pricks than Kicks and A Dream of Fair to Middling Women and the early poems. Normally I would wait until I had finished a book before committing myself to any opinion but I am reading this one in phases, trying to prolong the pleasure.    It is true that there is a bit of showing-off in these letters, especially the ones to his friend Thomas McGreevy, but isn't that the prerogative of brilliant young men aged 24 drunk on words and the discovery of literature?Beckett is wonderfully caustic on his contemporaries but he worries about the influence of Joyce.  His work, he says at one point "stinks of Joyce" and he wants to exude "my own odour".  I don't agree and I think the stories such as "Dante and the Lobster" written at this time are unmistakably his.
What is fascinating so far is the record of his struggle to make his mark and get launched as a writer.  In particular his arrival in Bloomsbury in the sweltering heatwave of August 1932 to do the rounds of the literary editors, including a trek round to the Hogarth Press in Tavistock Square.  Leonard Woolf was away in the country escaping the 92 degrees in the shade temperatures but SB was informed that his stuff would be sent on to Woolf.  He doubted, reasonably, that this would actually happen.  Overall the humiliation ("This month of creeping and crawling and sollicitation has yielded nothing but glib Cockney regrets") made him feel like "a slug-ridden cabbage".  Some things don't change.  What he didn't know was Chatto's reader's verdict on his Dream, the reader being Edward Garnett: "I wouldn't touch this with a barge pole.  Beckett probably is a clever fellow, but here he has elaborated a slavish, & rather incoherent imitation of Joyce, most eccentric in language & full of disgustingly affected passages – also indecent; this school is damned – & you wouldn't sell the book even on its title. Chatto was right to turn it down."  The editorial apparatus gives us this quote and much more and I think it is well done (in spite of the restriction of the Estate on publishing any letter that doesn't have a direct bearing on his work, a distinction that is beyond me). We may get excessive detail like Virginia Woolf's date of birth and maiden name when all we want to know is that Leonard Woolf had been approached but better too much than too little and most of the annotation is vitally important to illuminate obscurities of reference to people and French slang we mightn't be familiar with.
More fun ahead...
Posted by Nicholas Murray at 08:21 2 comments:

When you are reaching the end of a long period of research on a book with masses of highly-targeted reading, it's one of life's great pleasures to discover when you were least expecting it, something absolutely new and unexpected and gratuitous.
Rummaging outside a bookshop recently (one shortly to feature in my series of blogs about bookshops) I found one of those little green Penguin Modern Classics of the 1970s, William Gerhardie's Futility.  This book was first published in 1922 and the author was born in Russia of English parents which gives it the special flavour of a Russian novel.  Although he advertises at the beginning that: "The 'I' of this book is not me", the story clearly draws on his own experience.  Set around the time of the Russian Revolution it is both comic in its delineation of a vast extended family of hangers-on and spongers, dependent on Nikolai Vasilievich and the vaporous promise of his gold mines, and sad in its expression of the failure of the young narrator to win the beautiful and skittish Nina, middle of three sisters. Everyone waits for something to happen and nothing does and the humour is gentle and subtle, the mood bitter-sweet and the writing original and exact.  A very pleasant discovery.
Posted by Nicholas Murray at 08:59 2 comments: 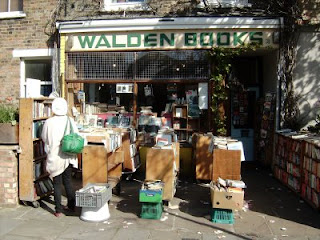 Although websites like Abe Books have transformed the way in which we track down out of print books (you can find virtually anything without leaving home) some of us still get pleasure out of browsing and making unexpected discoveries in real bookshops.  In Central London there are still some interesting and quirky shops, though they are gradually disappearing.  In the first of an occasional series I want to start with one of my favourites, Walden Books, in Camden. Not quite "Central London" but easily accessible by a 168 bus from Bloomsbury to Chalk Farm, Walden Books in Harmood Street has a profusion of quality books for the literary forager.  It has a fantastic collection of Penguins classic and modern, and lots of literary criticism, poetry, and biography, and is just the place to go for a cheap reading edition of your favourite Tolstoy or Graham Greene or less well known 20th century writers in English or in translation.  The only downside is that, as you can see, a lot of the stock is kept outside and shows the effect of the weather sometimes, but it has a proprietor who understands the insides of his books and everything is reasonably priced.  Long may it survive, but remember it's only open Thursday to Sunday.
Walden Books, 38 Harmood Street, London NW1 8DP.
Email: walden_books@tiscali.co.uk.
Web: ukbookworld.com/members/waldenbooks.
Posted by Nicholas Murray at 09:36 1 comment: