The French by The English

An amusing book (or at any rate a book that tries very hard to be amusing) arrives from its publisher: France: a nation on the verge of a nervous breakdown by Jonathan Miller. The premise of the book is that the French, unlike the English, are hypocritical, self-deluding etc etc. What a novel approach for a British journalist to adopt! 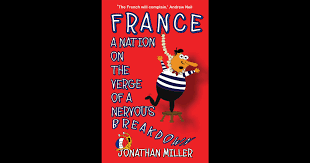 Estimates of the number of British people living in France seem to vary but half a million would probably be about right. Go into a British bookshop, however, looking for translated contemporary French fiction, switch on the TV expecting to see a contemporary French film or a documentary about life in France (preferably made by a French filmmaker) and you will find that the British, who claim to love France, have very little interest in it except as somewhere to acquire a holiday home and cheap booze.

Jonathan Miller is different. He has lived since 2000 in the Languedoc with his family (with a pied à terre in Westminster) and in 2014 he stood for election to his local council in the village of Caux “in order to introduce some Anglo-Saxon common sense” (presumably that’s the same commodity that Nigel Farage brings to the European scene) to the benighted peasants. This rather arrogant belief in his mission to bring enlightenment to the French sustains this book which is wonderfully free from any doubts about its own rightness on every topic.  In fairness it is not Peter Mayle.  Arranged as a sort of A to Z gazeteer of a whole range of topics it is well-informed (he has read all the stuff that expats don’t read including the late, acute, Tony Judt whose politics he can’t possibly share but whose critical historical perspective on 20th Century France he draws on and respects) and the definitions are punchy and often very funny (“Meet the real French, and laugh!” his blurb-writer nudges us rather desperately). Sometimes they fail to deliver like the Charlie Hebdo entry, subtitled “National Hypocrisy” where we don’t in the end get to hear about the hypocrisy, only the security failures which is another issue – but mostly they are snappy and diverting.

The author is a former Sunday Times journalist which means that the political analysis (free markets good, unions bad, welfare state, public subsidy bad etc etc) is the product of the usual off-the-peg British right wing journalistic mind-set so there are no surprises.

My real problem with this book is its confidence that “the French” can be identified as a single, undifferentiated concept like “the British” when as his own book reminds us there is much division, often on ethnic grounds, in France.

But I look forward to his next book about “the British” a nation every bit as self-deluding, hypocritical and contradictory as “the French”. 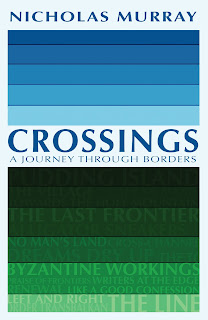 Thanks to everyone who came to the launch of Crossings: a journey through borders my new book from Seren at the Art Workers' Guild in London last night.  We enjoyed ourselves so much we forgot to take a photograph so here's one of the cover.  The book can be ordered directly from Seren or from any bookseller.
Posted by Nicholas Murray at 11:50 No comments: