V.S.Naipaul or Does Genre Matter? 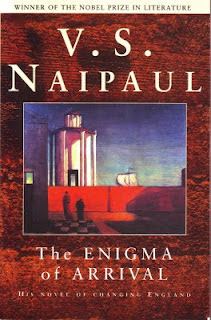 The idea that literary genres have fixed rules and determined boundaries, infringing which is a kind of solecism, an offence against classical decorum, would be thought laughable in any contemporary critical forum. Aristotle is dead and a playwright is more likely to be applauded for exploding dramatic conventions than for observing the 'Unities' of the old textbooks. My own 'novel' of 2001, A Short Book About Love, in its unclassifiability - it mixed fact, fiction, humour, seriousness, autobiography, the essayistic - is a case in point. If 'postmodernism' leaves one legacy it's the idea that mixing it is OK. I largely go along with this but I know there is an argument, occasionally heard, that genre is actually a useful concept, that it works, and is something a skilful writer can exploit with great success. The sonnet, for example, in its strict Shakespearean form, still has life in it and poets can get something out of it (see my forthcoming example in the Autumn issue of Poetry Salzburg Review!).

All this is by way of saying that I have, belatedly, caught up with V.S.Naipaul's The Enigma of Arrival (1987) which is marketed as a novel but is plainly an account of his own arrival in the Wiltshire countryside in the mid 1980s to witness changes in that rural society in the shadow of a crumbling country estate on which he lives in a rented cottage. It could easily have been marketed as a straight autobiography but the publishers aren't daft and it's subtitled "A Novel in Five Sections". I doubt if a single 'fact' has been changed and - this is the crucial thing - reading it one is convinced that this is a book about Naipaul himself at every stage of the way. On the other hand, the fictional format (or willing acceptance of its ground rules one might say) works perfectly. It's an expansive novel that repeats and recapitulates and does its business at leisure. In the end it works as a reading experience so what more could one want?
Posted by Nicholas Murray at 07:49 No comments:

Hammershoi: the Poetry of Silence 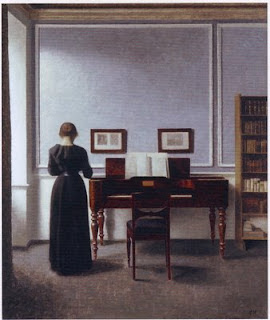 Discovering a new artist is like discovering a new writer: a whole world of expression and consciousness suddenly opens up before you. The Royal Academy's current exhibition of the Danish artist Vilhelm Hammershoi [I can't do the oblique accent across the 'o'] is just such an opportunity. Working in the first couple of decades of the 20th Century, Hammershoi (1864-1916) painted endless interiors of his Copenhagen house - as the RA brochure puts it: "quiet, haunting interiors, their emptiness disturbed only occasionally by the presence of a solitary, graceful figure, often the artist's wife. Painted in the subtlest tones of silvery grey, these sparsely-furnished rooms exude a sense of melancholy, introspection and hypnotic quietude". The exhibition is subtitled appropriately: "The poetry of silence." As well as these expressive interiors there are some equally evocative landscapes, including a wonderful view of Montague Street in Bloomsbury 102 years ago, down the side of the British Museum. The exhibition is on until 7 September.
Posted by Nicholas Murray at 06:35 5 comments: 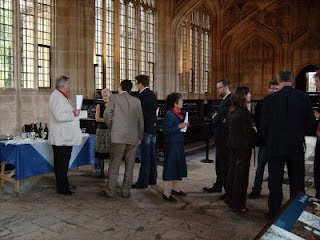 The picture here shows some of the participants in the Chatwin Symposium at Oxford today. The gentleman in the white jacket is Bruce Chatwin's younger brother Hugh and the lady in blue is his widow Elizabeth, talking to Symposium organiser, Jonathan Chatwin, who is not actually related. The Symposium heard papers from me, Susannah Clapp, author of With Chatwin, and several international scholars and Chatwin specialists. It was a very stimulating occasion and I learned a lot. The picture here was taken in the Divinity School, Old Bodleian Library, where there was also a display of some Chatwin items, including notebooks and photographs.
Posted by Nicholas Murray at 21:04 No comments:

My review of Iliya Troyanov's The Collector of Worlds, a fine novel about the Victorian traveller, Richard Burton, is in today's Independent book section.

See below for an earlier posting about this book.
Posted by Nicholas Murray at 12:34 No comments: 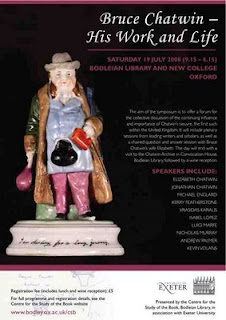 If you are interested in the life and work of Bruce Chatwin you may want to know about this day conference on Saturday 19th July in Oxford. It is organised by Jonathan Chatwin (no relation!) of Exeter University in conjunction with the Centre for the Book at the Bodleian Library and New College Oxford. Chatwin's widow, Elizabeth Chatwin, will be speaking alongside various other scholars and critics. As the author of the first book on Chatwin (in 1993) I shall be presenting a paper myself and taking part in a panel at the end of the day with Elizabeth Chatwin. There is a useful Chatwin website by the way.

The Conference is the first ever in the UK though I recall having attended one in Turin on 11 December 1997 called "Chatwin: oltre il viaggio..." [Chatwin: Beyond the Journey] and have the T-shirt to prove it. I nearly brought the house down by addressing the conference in Italian (coached by my wonderful interpreter) with the words: "I am sorry that I cannot talk to you tonight in Italian." I then delivered my paper in English. It was also the first time I have written an article in a continental newspaper because that morning I had an article in La Stampa. I wonder what Chatwin's current stock is like in Europe? On that evening in 1997 he was the last word in literary chic.
Posted by Nicholas Murray at 08:11 No comments: 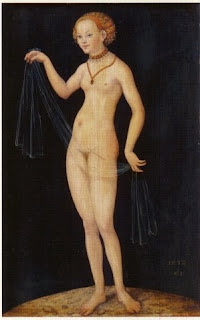 Today is the first anniversary of this blog and this is the 99th post. I was about to deliver myself of some profound reflection on the art of literary blogging but then I suddenly, and uncharacteristically, decided to honour the virtues of silence. Instead contemplate this image of Venus from the recent exhibition at the Royal Academy of the work of Lucas Cranach the Elder.
Posted by Nicholas Murray at 17:18 No comments:

Blast! Wyndham Lewis at the NPG

After a rather jejeune display of the annual BP Portrait Award at the National Portrait Gallery (very conventional, almost photographic realism has made a massive comeback in this annual exhibition) it was a delightful shock to step into the new Wyndham Lewis Portraits exhibition at the opposite end of the corridor. Many of these are familiar, not least as Penguin and other bookjackets, but they really do confirm Lewis's mastery of draughtsmanship. Modernist greats like Eliot, Pound and Joyce are here and, er, Edith Sitwell and there is a magical drawing of Rebecca West I hadn't seen before. Lewis lived at an extraordinarily exciting epoch of artistic vigour and newness. His aesthetic battles seem like real ones where ours are with triviality, crass marketing and the invasion of the arts by celebrity culture. It's a tiny exhibition for a fiver but still unmissable. It's on until 19th October
Posted by Nicholas Murray at 11:29 1 comment: 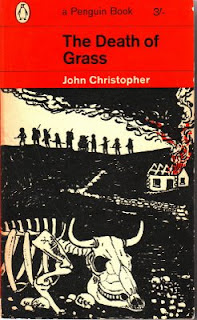 Thanks to the Oxfam Bookshop in Hereford for this 1963 Penguin edition of John Christopher's 1956 novel, The Death of Grass. I remembered I had been looking for it ever since it was mentioned on a Channel 4 series about science fiction last year in which I took part (very, very briefly to say something, mostly edited out, on Huxley's Brave New World). Christopher's novel was said to be one of the classier examples of the genre which I'm not normally a fan of, except that if you start to include Huxley, Orwell etc then I suppose I am. This chilling novel is about the effect of a plant virus that kills off grass, wheat etc etc and results in millions dying of starvation in Asia before it reaches Europe. Britain's Government makes arrangements to atom bomb the cities to get rid of hungry mouths and the citizens overnight take up arms and start looting and killing each other. One family and friends get through the road blocks thrown up around London and head for a stoutly defended Lake District valley, murdering all sorts of innocent folk along the way without compunction, in order to reach the haven of their brother's secluded Westmorland farm. That summary makes it sound garish but actually the USP of this fiction is its quiet, intimate realism, the way it shows horrifying things happening in a familar English landscape with familiar English characters. It's at the opposite pole of the flashy techno-fantasy of Hollywood scary movies and somehow more disturbing and terrifying as a result. Overnight, it suggests, civilisation can mutate into barbarism. Very effective.
Posted by Nicholas Murray at 14:22 3 comments: 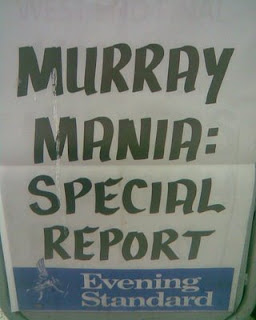