The Company You Keep 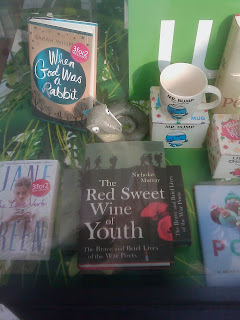 At last, in serious company in the window of Waterstone's in Camden High Street, London!
Posted by Nicholas Murray at 07:24 1 comment:

The novelist Sybille Bedford (1911-2006) who would have been 100 tomorrow, has been getting a lot of coverage in the papers recently.  One of those stylish and elegant writers who have a following but who never seem quite to capture the "mass literary fiction" market, to coin an unpleasant phrase, Sybille Bedford was a great friend of the novelist Aldous Huxley and even more so his wife, Maria, and became Huxley's first official biographer, her two volumes appearing in 1972-3.  When, thirty years later, I came to write the next full biography of Huxley [Aldous Huxley: An English Intellectual (2002)] I beat a path to her door in Chelsea.  I have written about this in a long piece for the magazine Areté [No 20, Spring/Summer 2006, not online] and also a shorter tribute in the memorial volume: Sybille Bedford: In Memory (2007).  Sybille, notorious for her acid way with people she didn't like, was extremely kind and helpful to me with my biography of Huxley and gave me a great deal of valuable information and insight when we spoke together over a glass of wine in her dark (she had problems with her eyesight) Chelsea basement flat on several occasions.  I have been struck by the recent tributes to her which have tended in the main to consist of posh literati reminiscing about posh Sybille (she was of Austrian blue blood) but I am not posh and it is worth recording that she could not have treated me with more generosity and respect.  Some of her novels are being reissued this week but they are easy to find second hand as Penguin Modern Classics (not all that neglected then).  Good old Sybille.
Posted by Nicholas Murray at 07:57 1 comment:

A Time for Outrage: Stéphane Hessel 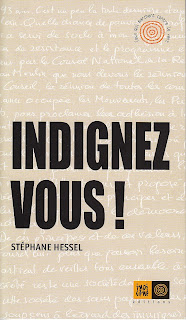 The surprise best-seller in France last year was a pamphlet from the Montpellier-based Indigène éditions, who specialise in giving a voice to third world and other "natives" closer to home, those who challenge the consensus, or as their slogan has it: "Ceux qui marchent contre le vent."  This little publishing house suddenly found itself with a success on its hands that sold over 600,000 copies in the run-up to Christmas where people seemed to be giving it to each other as a stocking filler.  The author, Stéphane Hessel, 93, a survivor of Buchenwald, a member of the French Resistance, and one of the drafters of the 1948 Universal Declaration of Human Rights, and an international diplomat, issued this passionate call to arms (I would translate it as: Get Angry!) particularly addressed to the young, to resist once more the negative political forces of our time.  He is the polar opposite of crass right wing media stars like Niall Fergusson and he seems to have struck a chord in France.
Now he is published in Britain as A Time for Outrage and it will be very interesting to see how he fares in a politically comatose country where even the Governor of the Bank of England is baffled at our failure to be more angry at what the bankers have done to us.   Already there have been sneers against Hessel to the effect that it is all words and no programme.  But this is to miss the point.  He is not a policy wonk, he is a man who is enraged, and wants us to be enraged.  He is trying to inspire.  He is invoking a spirit of resistance, of nay-saying, of dissent.  This doesn't play well in Britain where, slumped in front of our computer screens, we have got out of the habit of fighting back – though it's good news that a majority of people, according to a recent poll, are already bored to death with the idea of the fatuous Royal Wedding.
A personal footnote: I used a quotation from Indignez-vous! as the epigraph to my new verse broadside against the coalition government, Get Real!
Get both!
Posted by Nicholas Murray at 08:14 No comments: