Who Will Give a Fig for Figes?

The recent "squalid little story" as Robert Service put it, of the writer Orlando Figes paying lawyers to silence other writers who had alleged someone was rubbishing his rivals' work on Amazon – before he then first blamed his wife then admitted he was the culprit – is a very nasty one and will have ruined his reputation for good.  Obviously anyone who takes an anonymous Amazon review seriously has got problems that they need to address for themselves but the case does highlight two things (a) writers should conduct their intellectual disputes with each other in the fresh air of print and not in the courtroom and (b) anonymous blogging (something that mystifies me) has no intellectual validity in serious criticism of books: someone who is too cowardly even to stand by their own words cannot expect to be taken seriously by anyone.

This reminds me of a review (not anonymous) that appeared on Amazon in 1999 when my life of Andrew Marvell was published.  It wasn't vindictive, just vaguely sneering, and contrasted with the very pleasing reviews the book received generally.  Since no other Amazon review ever appeared this slab of disparagement has stood on the site for eleven years to confront anyone thinking of buying the book and will, no doubt, remain there across the "deserts of vast eternity".  At the time, I entered the name of the self-appointed reviewer into a search box and up popped a long, laudatory review of his own book – written by himself.  Now why didn't I think of that?

My fault in this instance was to have written a book about a 17th Century poet without seeking permission from the relevant academic 17th Cent. Lit. trade guilds and annoying an ambitious would-be media don on the rise by writing the book he wanted to be commissioned to write.  I am always amused by academics who sneer haughtily at the general Grub Street author then go running as fast as their little legs will carry them into the nearest TV studio or literary festival tent if there is the slightest chance of being on the telly.
Posted by Nicholas Murray at 13:27 5 comments:

We're the Tops – Well, Near the Bottom, Actually

You may have noticed a small logo that has appeared in the top right-hand corner of this page announcing that this blog is (just!) one of the 100 top Uk and Ireland literary blogs at No 91.

Some years ago I read an article suggesting that there were so many literary prizes and awards that you had to try pretty hard to avoid securing one.  Having never won a literary prize (though I was once on a shortlist of six for the Marsh Biography Prize alongside weighty literati like Roy Hattersley) I assure you that it is easier than people claim to avoid winning anything.  So let's throw our hats in the air to Wikio (whomsoever they be) for this unexpected garland.

It makes me feel I should be blogging more regularly.  I have, like many literary bloggers, been flagging a bit recently so let this be a wake-up call.

A Postscript on Literary Elections


I am currently reading V.S. Naipaul's 1958 novel The Suffrage of Elvira  and it is a wonderfully witty story about an election in Trinidad circa 1950.  Much more fun than page after page in the Sunday papers dribbling on about whether X looked better on TV than Y. Having not long ago read his first novel, The Mystic Masseur (1957) I have become a great fan of Naipaul's early work.
Posted by Nicholas Murray at 15:18 2 comments:

Literature and the Election 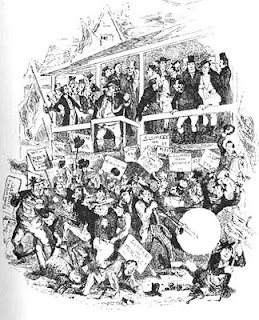 Yesterday in the park I walked past the Labour MP who will be expecting me to vote for him on 6th May and he beamed at all passers-by with a universal, impersonal smirk.  Why am I so indifferent to this election?  Why does my heart sink at the preparations for "the TV debate" – a stage-managed process which I will certainly not be watching?  And will there be more features in the Guardian Review embodying novel ways of rounding up the usual suspects (Pullman etc) to offer their valuable contribution as "writers" to the understanding of a process which Dickens (see picture) dealt with more appropriately in The Pickwick Papers?


I am not 'cynical about politics' or trying to dodge my civic duty.  I shall 'exercise my vote'.  But the spectacle of the issues that matter being daily evaded by all sides does not help the digestion.
Posted by Nicholas Murray at 07:32 3 comments: 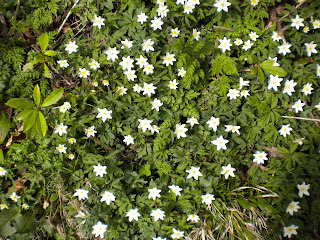 Well, spring at any rate, as these wood anemone in the Welsh Marches seem to show.  How much more interesting than the British election campaign.
Posted by Nicholas Murray at 16:43 1 comment: