Sweetness and Light:Matthew Arnold In Japan 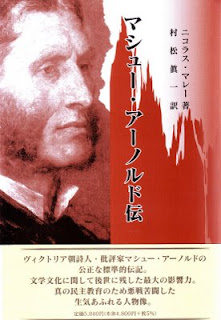 Thirteen years after its first UK publication, my biography of Matthew Arnold has just appeared in Japanese which raises the interesting question of how he is seen in Japan today. Perhaps someone will let me know.  Often seen in Britain in caricature as an "élitist" who defined culture as "the best that has been thought and said in the world", Arnold in fact remains an interesting and relevant thinker.  If his detractors just read his two essays, "Democracy" and "Equality" they would see an utterly different Arnold from the bewhiskered "elegant Jeremiah" attacked by one of his contemporaries.  And his belief that inequality damages everyone not just the disadvantaged is the theme, if I am not mistaken, of a much-praised book on equality published this month.
Posted by Nicholas Murray at 17:57 No comments:

Michael Holroyd on the (Non-) Selling of Books

The grand old man of English literary biography, Michael Holroyd, was holding forth in The Guardian at the weekend on the collapse of literary biography as a result of publishers and booksellers giving up on it.  The word 'literary', he said, "is death to sales – and perhaps literary biography is worst of all".   He concluded – and who can contradict this: "Publishers seem to outsiders to be paralysed by caution in these difficult times, asking themselves what sold last year and hoping to reproduce it. How often have I heard them say: "this book did not sell". I have never heard them say: "we did not sell this book"."  To which I would add that phrases like "no one wants to buy a long Russian novel about a woman who ends up throwing herself in front of a train" become self-fulfilling prophecies.  If a publisher says that no one wants to buy X then that is exactly what will happen.
Posted by Nicholas Murray at 08:41 1 comment:

Public Language or Jargon Must Go

The Local Government Association has announced a list of 200 forbidden words that must go if councils are to communicate effectively with the public.  Quite how this ban will be implemented they don't say but anything that consigns the nasty, dishonest and duplicitous 'stakeholder' to oblivion will be worth any punishment they can devise.  But the BBC report on this mentions 'taxonomy' as one of the 'horrors' that must go.  With all due respect to the Plain English activists I don't find this horrific.  It's actually quite a useful word for 'classification' which has every right to exist.  I am all for plain speaking, lucidity, and clarity but let's not use it as an excuse to jettison perfectly valid words that enrich the language and give us more range of expression.
Good communication doesn't depend on using babyish words and 'exotic' vocabulary is one of the joys of life.
There is a sniff of puritanism here which I don't like.
Posted by Nicholas Murray at 07:57 1 comment:

I have just posted the following on The Observer website after Robert McCrum called there for a biography of Huxley – none, he said, having appeared since Sybille Bedford's in 1973/74.  Further words fail me.  I don't like, as it were, blowing my own trumpet but it is important to set the record straight.
I am astonished at Robert McCrum's comments. Does he not know that his own paper reviewed my major new biography of Huxley, "Aldous Huxley: an English Intellectual" in 2002, the first for 30 years, incorporating much hitherto unrevealed material? It was described by Roy Jenkins as "the best literary biography I have ever encountered" and is described in the DNB and the Oxford History of English Literature as the standard biography of Huxley and there are still plenty of copies of the paperback today in Foyle's. It also won the approval of Sybille Bedford herself. Has no one on The Observer heard of Google?
Posted by Nicholas Murray at 09:02 1 comment:

More Thoughts on the Novel

"The novel tells a story, oh dear yes, the novel tells a story."  From memory that is what EM Forster wrote in his treatise Aspects of the Novel.  I suppose he meant that what we want from a good novel is something more than just an efficient narrative.  A book is about more than its plot. Ideally, one might object, why can't we have both – and in the best novels that is what we get, a compelling narrative and all manner of additional richness.  When my 'novel' A Short Book About Love was published in 2001 several people said to me "It's not a novel" and they were right.  But what does one call imaginative prose fiction that makes up its own rules?  Borges' ficcion is not a bad one.  We know we oughtn't to be fixated on genre and its rules but we are nonetheless.
Reading for the first time Richard Aldington's pugnacious and racy 1929 novel Death of a Hero I found his prefatory remarks to echo the theme of the criticism of Malcolm Lowry in the last post of mine.  He writes: "This book is not the work of a professional novelist. It is, apparently, not a novel at all. Certain conventions of form and method in the novel have been erected, I gather, into immutable laws, and are looked upon with quite superstitious reverence. They are entirely disregarded here. To me the excuse for the novel is that one can do any damned thing one pleases...I am all for disregarding artistic rules of thumb. I dislike standardized art as much as standardized life...I knew what I wanted to say, and said it."
He certainly did!
Posted by Nicholas Murray at 09:18 5 comments: 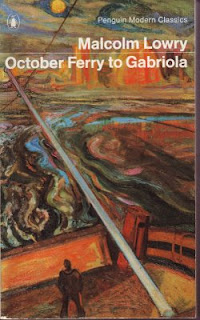 This year is the centenary of the birth of the writer Malcolm Lowry, one of a host of Liverpool (well, New Brighton if you are a pedantic Scouser) writers who featured in my book about the city last year So Spirited A Town: Visions and Versions of Liverpool. In the book I relate the well-known story of Lowry's going away to sea at the age of 17 and being delivered to the Liverpool dock in his father's Rolls Royce.  Lowry senior was a wealthy Liverpool cotton-broker who paid his reprobate son an allowance all his life so that he never had to put up with that tiresome inconvenience that hampers the rest of us scribblers, a proper job.  According to Lowry's brothers this Roller was one of his tall tales – he liked nothing better to play the role of an old sea dog even though this was his sole professional voyage – and in fact it was a more humble vehicle that pulled up at the dock gates.
I have been commissioned to contribute a chapter to a new book of centenary essays on Lowry edited by Bryan Biggs and published by Liverpool University Press (more on this later in the year) and so I have been gathering my thoughts. Arthur Calder-Marshall who knew him once wrote:  "He was incapable of inventing anything. He couldn't take a character and/or a situation and elaborate it into a story...I think Lowry's deficiencies as a novelist were precisely the same as his virtues as a writer. I think he hadn't got any of the equipment that the ordinary secondary novelist has. I think telling a simple story, handling a situation, handling time – they provided problems for him which were absolutely insoluble unless he invented this peculiar form that he did..."   Discuss, as they used to say on exam papers.
Actually, reading even some of Lowry's lesser known prose pieces in Hear Us O Lord from Heaven Thy Dwelling Place (the words of an old Manx fisherman's hymn) one feels this is nonsense. Yes, he endlessly re-cycled and re-worked his own experiences, rather than making up fresh plots, but his prose is capacious, beautifully descriptive, rich.  Who needs the whodunnit element when one can have writing like this?  There is something haunting and compelling in particular about his writing from British Columbia where he and his wife lived on the beach in a squatter's shack from 1940 to 1954 in a threatened Eden.  As Aldous Huxley once remarked, there are no rules for the novel, it only has to be interesting.
Posted by Nicholas Murray at 08:38 No comments: