At the Bright Hem of God: Radnorshire Pastoral by Peter J Conradi

Today's Independent has a review by me of Peter J Conradi's At the Bright Hem of God: Radnorshire Pastoral published by Seren Books at £9.99. This is an excellent book about the Welsh Marches. Inevitably, reviews are cut down, even given the tiny word allocation of contemporary newspapers so here's my original version:-

At the Bright Hem of God: Radnorshire Pastoral

The last dragon in Wales sleeps in the Radnor Forest – a seven mile long upland area of East Wales that most Independent readers would understandably be unable to pinpoint on a map. The creature will not wake so long as he remains ringed by the multiple churches of the dragon-slayer, St Michael (Llanfihangel). In the lee of one such church, at the end of a two and a half mile hedged cul de sac, and itself ringed by 1000-year-old yews in a circular churchyard (the devil enters at corners) lives Peter J Conradi, a mild-mannered Prospero summoning up the benign spirits of Radnorshire past: writers, poets, historians, anchorites and mystics.

Conradi is alive to the magical and other-worldly dimension of the hauntingly beautiful Welsh March – the Elizabethan magician, Simon Dee may have been born here – but this is not a flaky or New Age treatise – and he acknowledges the mixed benefits of the incomer invasions which somehow have never swamped the locals, whose characteristic speech patterns, weathered obliquity, and gift for slow living he captures well. He is also keen to refute the idea that this is some sort of anglicised margin rather than, as he contends, a central repository of the true spirit of Welshness since the 12th century. He presents in sequence writers like Gerald of Wales, a suitably mongrel Welsh/Norman border figure, the poets Herbert, Traherne, Vaughan who sought and found “the Paradise within” in this numinous landscape, the attractive figure of the Reverend Francis Kilvert whose humane curiosity and kindness appeal to him and who provokes one of his rare personal lyric flights. There is Chatwin of course, and a contemporary trio of poets, R.S.Thomas, Roland Matthias, and Ruth Bidgood who have celebrated what Conradi calls 'the March', an area he has known for 40 years. Wales “has absorbed many English enthusiasts for its scenery and history: it can in me find room for one more”.

Generally, Conradi doesn't thrust himself on the reader, and writes a thoughtful and non-judgemental prose even when dealing with what have been highly contentious matters of Welsh politics and cultural identity. He judges (in a gentle slight to the more famous Thomas) R.S. Thomas (who supplies the book's title) to be the greatest 20th century Welsh poet writing in English but is unillusioned about what he calls tactfully, Thomas's “human frailties”. He is glad to quote Bidgood's declaration that she did not come to this area to escape the world: “This is the world.”

Conradi has written the perfect primer to this quiet stretch of Wales and Simon Dorrell's exquisite pen and ink miniatures complete what must be the best introduction to this area ever written.

Nicholas Murray's Bruce Chatwin (1993) is to be re-issued later this year.

Can Anyone Save Publishers from Themselves? 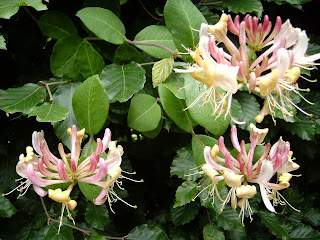 Contemplating (above) the fresh honeysuckle in my Radnorshire garden I try to hold on to some sanity in a world where publishing seems intent on a course of wild self-destruction. In today's Independent a two-page spread with a silly heading: "Two Weeks to Save Britain's Book Trade" attempts to say what is wrong with the business [meaning: the big hitters like Coetzee will all be published in our equivalent of the French rentrée littéraire in September in a two week period hoping to stem the losses so far this year being incurred by publishers]. Conventional wisdom says that publishing always rides the recession but this time it isn't happening and sales have slumped. Publishers are sacking their staff, advances are crashing down and things, as this blog has been saying for some time, are looking very grim indeed. Even Richard and Judy seem to have retired from the fray. In this article, however, one ray of light shines out. Someone actually enunciates a simple but incontrovertible truth about how we got into the mess that is contemporary British publishing. Step forward Jonny Geller, managing director of the books division of the Curtis Brown literary agency who tells it like it is: "Publishing has become quite reactive. It is sales-led. We need publishers to start taking risks again." He is saying that publishers should become publishers again. Give that man a gong.
Posted by Nicholas Murray at 21:08 2 comments:

Tsvetaeva in Pimlico: Russian Poetry at the Tate

To Tate Britain for the launch of the newly revised and expanded edition of Bride of Ice: New Selected Poems by Marina Tsvetaeva translated by Elaine Feinstein. This was a very swanky venue at the Rex Whistler Restaurant at Tate Britain so I assume some Russian cultural foundation or other was footing the bill for a small poetry press (Michael Schmidt, the boss of Carcanet had to double up, in more traditional small press style, as his own photographer for the evening). Lots of poets and writers turned up, including Ruth Padel, no doubt relieved to have the Oxford Professor of Poetry debacle put behind her, Dannie Abse, Michèle Roberts, Ruth Fainlight, Peter Robinson, Anthony Rudolf and others.
It was good to be reminded again how good, how powerful and moving this great 20th Century Russian poet is:-
In a world
In a world where most people
are hunched and sweaty
I know only one person
equal to me in strength.
In a world where there is
so much to want
I know only one person
equal to me in power.
In a world where mould
and ivy cover everything
I know only one person – you –
who equals me in spirit.
Posted by Nicholas Murray at 09:24 2 comments: 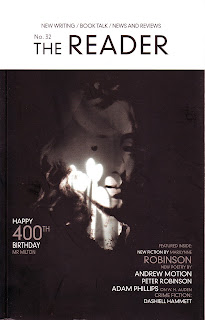 It must be the heat – over 30 degrees today in London – that is slowing down the blogbrain but I seem to be writing less here these days. Here, however, are two recommendations following people kindly sending me copies of their publications. The first is the latest issue of The Reader. This is a very nicely produced magazine with an odd title and the issue I have been sent has articles on Milton (see right), poems, fiction extracts, celebrity columns (Ian McMillan etc) and reviews. And what's more it originates from my old university Department of English at Liverpool.
The second item, also with a Liverpool connection, is the latest poetry book from Donut Press (run by a very good poet, Julia Bird) and it is called Field Recordings: BBC Poems (1998-2008) by Liverpool poet Paul Farley. Donut editions are beautifully produced and the poems are good (including the first poem I have ever read on the subject of 'blind scouse' ) so get along there pronto.
Posted by Nicholas Murray at 15:19 No comments: