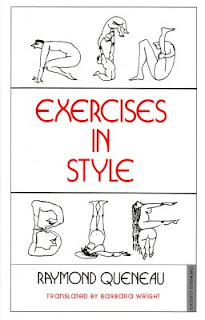 Reading John Calder's obituary of the translator Barbara Wright in today's Guardian co-incided with the arrival in the post of a review copy from One World Classics of her translation of Raymond Queneau's Exercises de style (1947) which she translated first in 1958 and then re-issued in 1979 for John Calder but which is re-issued once more in a revised translation by One World at £7.99.  In his obituary Calder describes Exercises in Style as "the banal story of a minor incident on a bus, told in 99 different ways".  Queneau's madcap inventiveness must have created many headaches for the translator but Calder continues: "The author encouraged her invention of new English equivalents for those chapters that were too embedded in idiomatic French to be transcribed. A working relationship was established and she went on to translate many of Queneau's works."  Wright's Cockney version of the story (one of the 99) is a tour de force and very funny.  Highly recommended – as is One World's blog.  One World have acquired John Calder's backlist and therefore there are lots of pleasures to come.
People like me who issue regular lamentations about the dumbing-down of British publishing have to admit that in the field of literary classics there are some very exciting developments like One World and Hesperus and many other smaller imprints doing their bit for real literature in attractive editions.
Posted by Nicholas Murray at 09:01

We're following each other around this week Nick. Serendipitously, I was reading this very book on the tube last night - unaware of the sad news about its translator - and had to stop reading it, I was laughing so hard I was practically crying... and there was this guy, he kept pushing me...

Katy, that is the same with Beckett a propos of your last comment. Sometimes he is simply HILARIOUS! (eg "Dante and the Lobster")

Our suite creates a subject new year card on the principle of harmonious ' and radiant projects.
These projects are carried inaccurate close the cards the best mace of graphic artists and designers in
the buy who are experts in every intelligibility of the word. They are also extraordinarily supple, so you can
achieve completely interesting business press card designs, depending on the individual needs of each client.
We do not own a professional printing machines undertaking the highest je sais quoi of each individualistic card.
Extensive variety of paper allows you to into the expectations of even the most tough customers
from every conceivable industry. We guarantee the copy and advantage of portly quantities of business
cards in the shortest credible time. In our what really happened, the highest value is the happiness of the proposed
penalty and reliable checking from people receiving and carrying revealed an order recompense business cards.
With access to the services offered including our website, you can quickly and without undue
formalities mission an degree object of goods, review the project and approved it and ordered some task
cards. Choose our theatre troupe as a good trade postcard is again a guaranty for success.
Greet
Merio [url=http://www.kalendarze.dogory.pl]Kalendarze[/url]